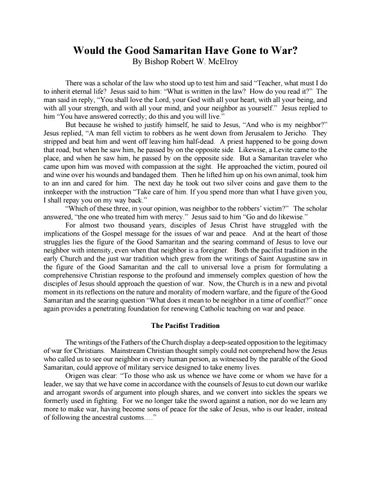 Would the Good Samaritan Have Gone to War? By Bishop Robert W. McElroy There was a scholar of the law who stood up to test him and said “Teacher, what must I do to inherit eternal life? Jesus said to him: “What is written in the law? How do you read it?” The man said in reply, “You shall love the Lord, your God with all your heart, with all your being, and with all your strength, and with all your mind, and your neighbor as yourself.” Jesus replied to him “You have answered correctly; do this and you will live.” But because he wished to justify himself, he said to Jesus, “And who is my neighbor?” Jesus replied, “A man fell victim to robbers as he went down from Jerusalem to Jericho. They stripped and beat him and went off leaving him half-dead. A priest happened to be going down that road, but when he saw him, he passed by on the opposite side. Likewise, a Levite came to the place, and when he saw him, he passed by on the opposite side. But a Samaritan traveler who came upon him was moved with compassion at the sight. He approached the victim, poured oil and wine over his wounds and bandaged them. Then he lifted him up on his own animal, took him to an inn and cared for him. The next day he took out two silver coins and gave them to the innkeeper with the instruction “Take care of him. If you spend more than what I have given you, I shall repay you on my way back.” “Which of these three, in your opinion, was neighbor to the robbers’ victim?” The scholar answered, “the one who treated him with mercy.” Jesus said to him “Go and do likewise.” For almost two thousand years, disciples of Jesus Christ have struggled with the implications of the Gospel message for the issues of war and peace. And at the heart of those struggles lies the figure of the Good Samaritan and the searing command of Jesus to love our neighbor with intensity, even when that neighbor is a foreigner. Both the pacifist tradition in the early Church and the just war tradition which grew from the writings of Saint Augustine saw in the figure of the Good Samaritan and the call to universal love a prism for formulating a comprehensive Christian response to the profound and immensely complex question of how the disciples of Jesus should approach the question of war. Now, the Church is in a new and pivotal moment in its reflections on the nature and morality of modern warfare, and the figure of the Good Samaritan and the searing question “What does it mean to be neighbor in a time of conflict?” once again provides a penetrating foundation for renewing Catholic teaching on war and peace. The Pacifist Tradition The writings of the Fathers of the Church display a deep-seated opposition to the legitimacy of war for Christians. Mainstream Christian thought simply could not comprehend how the Jesus who called us to see our neighbor in every human person, as witnessed by the parable of the Good Samaritan, could approve of military service designed to take enemy lives. Origen was clear: “To those who ask us whence we have come or whom we have for a leader, we say that we have come in accordance with the counsels of Jesus to cut down our warlike and arrogant swords of argument into plough shares, and we convert into sickles the spears we formerly used in fighting. For we no longer take the sword against a nation, nor do we learn any more to make war, having become sons of peace for the sake of Jesus, who is our leader, instead of following the ancestral customs….”