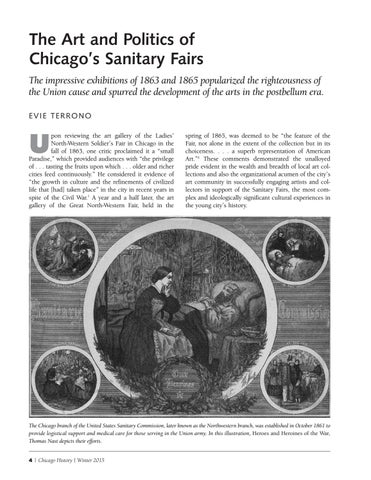 The Art and Politics of Chicago’s Sanitary Fairs The impressive exhibitions of 1863 and 1865 popularized the righteousness of the Union cause and spurred the development of the arts in the postbellum era. EVIE TERRONO

pon reviewing the art gallery of the Ladies’ North-Western Soldier’s Fair in Chicago in the fall of 1863, one critic proclaimed it a “small Paradise,” which provided audiences with “the privilege of . . . tasting the fruits upon which . . . older and richer cities feed continuously.” He considered it evidence of “the growth in culture and the refinements of civilized life that [had] taken place” in the city in recent years in spite of the Civil War.1 A year and a half later, the art gallery of the Great North-Western Fair, held in the

spring of 1865, was deemed to be “the feature of the Fair, not alone in the extent of the collection but in its choiceness. . . . a superb representation of American Art.”2 These comments demonstrated the unalloyed pride evident in the wealth and breadth of local art collections and also the organizational acumen of the city’s art community in successfully engaging artists and collectors in support of the Sanitary Fairs, the most complex and ideologically significant cultural experiences in the young city’s history.

The Chicago branch of the United States Sanitary Commission, later known as the Northwestern branch, was established in October 1861 to provide logistical support and medical care for those serving in the Union army. In this illustration, Heroes and Heroines of the War, Thomas Nast depicts their efforts. 4 | Chicago History | Winter 2015 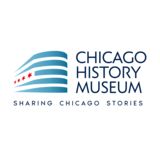