A Letter to Cyprus 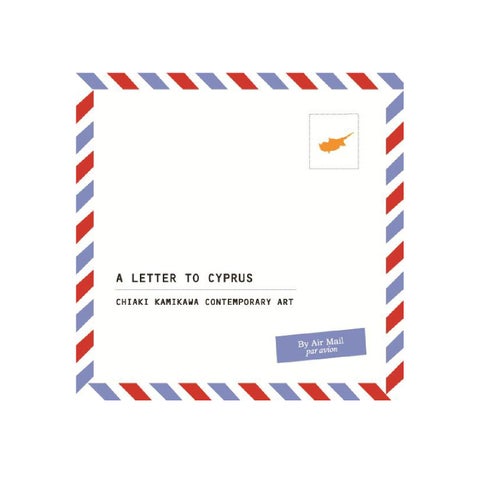 A Letter to Cyprus - An exhibition of letters -

A Letter to Cyprus was an open-call exhibition organized by Chiaki Kamikawa Contemporary Art in Paphos, Cyprus. In the proposal of the exhibition, the interpretation of â&amp;#x20AC;&amp;#x153;Cyprusâ&amp;#x20AC;? as a subject matter of the letter was open to each artist. It could be interpreted as a country, history, an imaginative place, person or anything that symbolises Cyprus for each artist. There was no limitation for the use of material and no obligation for including text. This exhibition was initiated with three main purposes. Firstly the exhibition intended to re-evaluate the role of personal communication through letters which is considered to be old-fashioned. It provided us an opportunity to experience again the humane aspect of writing, sending receiving and reading letters which is hardly explored after the introduction of the technology in this field. Secondly, this exhibition aimed to investigate art work as communication tools. It is a challenge for artists to create an art work that has a message which will be read by the audience. The letter in the exhibition could be without text, and it required even more readability of the work as purely graphic communication. Thirdly, by asking artist to address the letter to Cyprus, the exhibition attempted to raise the awareness of the country for those who may or may not be familiar with Cyprus. The exhibition proposal coincided with the sudden international awareness of the country with the recent economic issues, however, it was not solely intended to focus on this subject but reflect what Cyprus means to individuals at much deeper and personal level. There were responses from all over the world and the letters were sent from 12 different countries by 40 artists. All artistsâ&amp;#x20AC;&amp;#x2122; letters were displayed during the exhibition as it was the part of the condition of the open call.

In organizing this exhibition, we observed humane characteristics around the letters and postal services. As we asked artists to send letters by post like a normal letter, some postal accidents such as delays, returns, mistreatment of the posted works occurred. Some letters didnâ&amp;#x20AC;&amp;#x2122;t arrive on time, sent back to the artist or damaged during the postal process. On the contrary, we could see contemporary aspects of communication. Inquires about the open call, about the arrival of the letter, and tracking the possibly lost letter were all done by emailing or through internet. It is rather ironic to realise that nowadays we even have to confirm that we have sent or received the letter by email. Many of the works were sent without conventional stamps but bar-coded price stickers. The Romanticism around the choice of envelopes and stamps seemed not to be much of the artistâ&amp;#x20AC;&amp;#x2122;s interests but the aesthetic attention was given more to the content â&amp;#x20AC;&amp;#x201C; the letter itself. For the content of the letters, a variety of approaches were seen. Some letters commented on the recent history of Cyprus, some referred to the economic crisis. Some letters were nostalgic about unknown land that is far from the sender, and others reflected Greek mythology, or showed personal attachments to the island. We sincerely hope that this exhibition stimulated artists and people to rethink or beware of Cyprus, and to look at our humane aspect again through letters and postal system that we have been using for so many years.

Participating artists (In order of the arrival of letters):

Dear Cyprus, You have become my home. The home of my children, already the home of my husband. You are a country that gives to those who live here asking very little in return and tolerating a lot from those who cannot or do not want to see your rare goodness and beauty. And beautiful you are. I see this beauty in the generosity of your people who invite strangers for coffee, give bags of fruit to neighbours and who would give anything to see a child smile! From the simplicity of life in the village to the progressive undercurrent of change in the cities â&amp;#x20AC;&amp;#x201C; it is an island of varied way of life, varies people, different faces, languages. I hope you will always stay this way, evolving and yet holding on to traditions. Cyprus, may you continue to give hope and a happiness to all who visit your shores, Love, Miriam

“My letter to Cyprus is a postcard with a photocollage: “Aphrodite’s Song”. In this year 2013 it’s a blues.”

On the 23rd April 1941, the local newspaper of the city of Larnaca in Cyprus, reported that a woman’s head had disappeared while taking a walk down the pier, during a Sunday morning. The article reports that the young woman was seen casually walking alone on the pier and seemed to be expecting a meeting with a friend. She was wearing a crepe blue dress and matching gloves, and was holding a small lady’s bag with a silver chain. The reporter goes on to say that according to people who had seen her, she was a very attractive lady, although oddly enough nobody seemed to remember the colour of her hair, the shape of her eyes or any other detail concerning the face. Some people said she was wearing a hat but others were positive that she did not. According to people who were on the pier at the same time, a photographer by the name George C. who owns a photo studio at Larnaca and who is known to take pictures of families on Sunday mornings, approached the young woman and asked if he could take a picture of her. The woman accepted and even wrote on a piece of paper her address so he could send her the picture once it was printed. The photographer happily agreed and immediately started looking towards the sky, calculating the direction of the light, the position of the sun, in order to find the perfect spot for his model. He did not want any shadows to hide her features or any strange angles to do unjust to her face. George C. positioned his tripod, adjusted his camera and asked the woman to stand nearby a small wall that was coming up to her waist, about one foot off the edge of the pier. Her blue dress was in perfect harmony with the blue sea while her skin was reflecting the warmth of the luminous sky. Looking through his camera lense, he asked her to stand facing his left hand side and turn her head towards the camera. A classic triosquart position. Oddly enough George C. said that he could not see the young lady’s head and tried to focus his camera several times but with no result. At about the same time some other people observing the scene, noticed that the young woman’s head was not visible anymore but the moment of posing was so harmonious, the light so pure and her body so elegant that they did not want to cause any disturbance that might have interrupted the scene. Instead they continued to watch smiling. The photographer thinking that it would be too rude to have his model standing for a long time, proceeded in taking the picture and thought that a logical explanation could solve the whole matter. He waved a thank you gesture at the lady and started folding his tripod. He was utterly surprised to see that even

after he had packed his camera and looked at the young lady with his own eyes, he still could not see her head. The young lady waved goodbye to the photographer and continued walking slowly down the pier in a coquettish manner.

あなたとわたしが見た風景 The Scenery in the Mind of You &amp; Me

The Scenery in the Mind of You &amp; Me Like in Cyprus, in Asian countries there are also incidences that different ethnic groups argue about each other’s ‘Homeland”. In contemporary society, it is rather impossible to find a region that only has one ethnic group. In Shanghai in China, there are Shanghai people who have been living there for generations and people who came from remote villages to work in the city. Even though their ethnic origin is the same, there is an unspoken but fierce conflict between them. Why does human being try to eliminate something that is not the same as themselves? And in Tokyo, New York and London. Everyone has his own issue. So whose homeland is the land that they argue about? Is it different the scenery that children of natives and new comers have seen? No. They have been brought up with the same scenery, breathing the same air and having the same feelings deep inside their heart. Even if we talk about the different places, isn’t homeland the same for everyone? This photograph is taken with multiple exposures and it is layered images of sky and cobbled path. The nostalgic feeling is symbolized with dark tones and the black frame. The homeland that you claim is also the homeland to me. The homeland that I claim is also the homeland to you. As we share the same feelings, one day we will understand each other.

I want to see you”

Dearest C, Do you remember that summer when we first met? I was walking alone on the beach at dusk when I saw you out in the green sea. At first I didnâ&amp;#x20AC;&amp;#x2122;t know if you were alive. The way you were floating there, motionless, on the waves. But then you did move and I froze. You raised your hands over your head and began swimming to shore. Your skin was dark against the sun setting behind you but I could tell that you were naked when you had gone into the water. You moved towards a small pile of objects on the sand and began pulling on your clothes. This time it was you that froze. I couldnâ&amp;#x20AC;&amp;#x2122;t see your eyes but I know that you saw me watching you. You slowly and deliberately finished dressing yourself. Neither of us looking away. When you were done you simply turned and walked into the dunes and were gone. Later, when we met in town your feet were still bare. You called me &#39;the one on the shore&#39;. We spent the night in your room. Your skin was soft and tasteful like salt. We shared everything with each other. In the morning we made plans and I spent every moment I had left on the island with you. Do you remember those days? I carry them in my heart until we see each other again. Always, M

A Letter to Cyprus

Online catalogue of the exhibition "A Letter to Cyprus" by Chiaki Kamikawa Contemporary Art, Paphos, Cyprus. 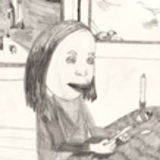