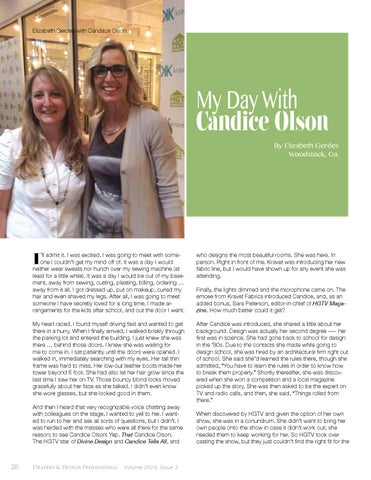 My Day With Candice Olson By Elizabeth Gerdes Woodstock, Ga.

’ll admit it. I was excited. I was going to meet with someone I couldn’t get my mind off of. It was a day I would neither wear sweats nor hunch over my sewing machine (at least for a little while). It was a day I would be out of my basement, away from sewing, cutting, pleating, billing, ordering … away from it all. I got dressed up, put on makeup, curled my hair and even shaved my legs. After all, I was going to meet someone I have secretly loved for a long time. I made arrangements for the kids after school, and out the door I went.

who designs the most beautiful rooms. She was here. In person. Right in front of me. Kravet was introducing her new fabric line, but I would have shown up for any event she was attending.

My heart raced. I found myself driving fast and wanted to get there in a hurry. When I finally arrived, I walked briskly through the parking lot and entered the building. I just knew she was there … behind those doors. I knew she was waiting for me to come in. I sat patiently until the doors were opened. I walked in, immediately searching with my eyes. Her tall thin frame was hard to miss. Her low-cut leather boots made her tower beyond 6 foot. She had also let her hair grow since the last time I saw her on TV. Those bouncy blond locks moved gracefully about her face as she talked. I didn’t even know she wore glasses, but she looked good in them.

After Candice was introduced, she shared a little about her background. Design was actually her second degree ― her first was in science. She had gone back to school for design in the ’80s. Due to the contacts she made while going to design school, she was hired by an architectural firm right out of school. She said she’d learned the rules there, though she admitted, “You have to learn the rules in order to know how to break them properly.” Shortly thereafter, she was discovered when she won a competition and a local magazine picked up the story. She was then asked to be the expert on TV and radio calls, and then, she said, “Things rolled from there.”

And then I heard that very recognizable voice chatting away with colleagues on the stage. I wanted to yell to her. I wanted to run to her and ask all sorts of questions, but I didn’t. I was herded with the masses who were all there for the same reason; to see Candice Olson! Yep. That Candice Olson. The HGTV star of Divine Design and Candice Tells All, and

Finally, the lights dimmed and the microphone came on. The emcee from Kravet Fabrics introduced Candice, and, as an added bonus, Sara Peterson, editor-in-chief of HGTV Magazine. How much better could it get?

When discovered by HGTV and given the option of her own show, she was in a conundrum. She didn’t want to bring her own people onto the show in case it didn’t work out; she needed them to keep working for her. So HGTV took over casting the show, but they just couldn’t find the right fit for the 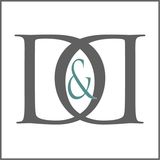