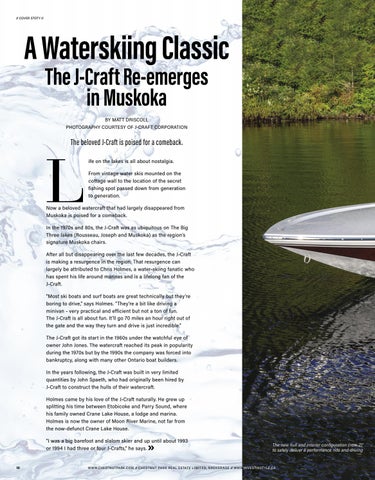 The beloved J-Craft is poised for a comeback. ife on the lakes is all about nostalgia. From vintage water skis mounted on the cottage wall to the location of the secret fishing spot passed down from generation to generation. Now a beloved watercraft that had largely disappeared from Muskoka is poised for a comeback. In the 1970s and 80s, the J-Craft was as ubiquitous on The Big Three lakes (Rousseau, Joseph and Muskoka) as the region’s signature Muskoka chairs. After all but disappearing over the last few decades, the J-Craft is making a resurgence in the region. That resurgence can largely be attributed to Chris Holmes, a water-skiing fanatic who has spent his life around marinas and is a lifelong fan of the J-Craft. “Most ski boats and surf boats are great technically but they’re boring to drive,” says Holmes. “They’re a bit like driving a minivan - very practical and efficient but not a ton of fun. The J-Craft is all about fun. It’ll go 70 miles an hour right out of the gate and the way they turn and drive is just incredible.” The J-Craft got its start in the 1960s under the watchful eye of owner John Jones. The watercraft reached its peak in popularity during the 1970s but by the 1990s the company was forced into bankruptcy, along with many other Ontario boat builders. In the years following, the J-Craft was built in very limited quantities by John Spaeth, who had originally been hired by J-Craft to construct the hulls of their watercraft. Holmes came by his love of the J-Craft naturally. He grew up splitting his time between Etobicoke and Parry Sound, where his family owned Crane Lake House, a lodge and marina. Holmes is now the owner of Moon River Marine, not far from the now-defunct Crane Lake House. “I was a big barefoot and slalom skier and up until about 1993 or 1994 I had three or four J-Crafts,” he says. &gt;&gt;