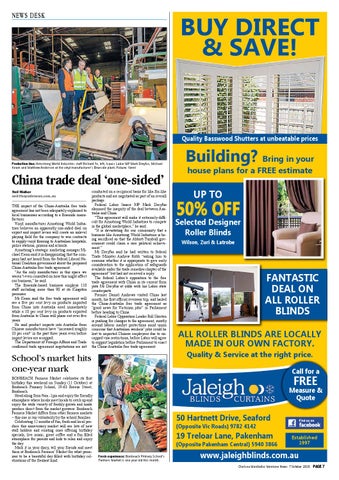 China trade deal ‘one-sided’ Neil Walker neil@baysidenews.com.au THE impact of the China-Australia free trade agreement has not been adequately explained to local businesses according to a Braeside manufacturer. Vinyl manufacturer Armstrong World Industries believes an apparently one-sided deal on export and import levies will create an unlevel playing field for the company to win contracts to supply vinyl flooring to Australian hospitals, police stations, prisons and schools. Armstrong’s strategic marketing manager Michael Keam said it is disappointing that the company had not heard from the federal Liberal National Coalition government about the proposed China-Australia free trade agreement. “As the only manufacturer in this space we weren’t even consulted on how this might affect our business,” he said. The Braeside-based business employs 110 staff including more than 90 at its Kingston premises. Mr Keam said the free trade agreement will see a five per cent levy on products imported from China into Australia axed immediately while a 10 per cent levy on products exported from Australia to China will phase out over five years. He said product imports into Australia from Chinese manufacturers have “increased roughly 33 per cent” in the past three years even before import levies are scrapped. The Department of Foreign Affairs and Trade confirmed trade agreement negotiations are not

conducted on a reciprocal basis for like-for-like products and are negotiated as part of an overall package. Federal Labor Isaacs MP Mark Dreyfus slammed the inequity of the deal between Australia and China. “This agreement will make it extremely difficult for Armstrong World Industries to compete in the global marketplace,” he said. “It is devastating for our community that a business like Armstrong World Industries is being sacrificed so that the Abbott-Turnbull government could claim a rare political achievement.” Mr Dreyfus said he had written to federal Trade Minister Andrew Robb “asking him to examine whether it is appropriate to give early consideration to the application of safeguards available under the trade remedies chapter of the agreement” but had not received a reply. The federal Labor’s opposition to the free trade agreement with China in its current form puts Mr Dreyfus at odds with his Labor state counterparts. Premier Daniel Andrews visited China last month, his first official overseas trip, and hailed the China-Australia free trade agreement as “good news for Victorian jobs” in Parliament before heading to China. Federal Labor Opposition Leader Bill Shorten is pushing for changes to the agreement, mostly around labour market protections amid union concerns that Australian workers’ jobs could be lost to imported Chinese employees due to uncapped visa restrictions, before Labor will agree to support legislation before Parliament to enact the China-Australia free trade agreement.

School’s market hits one-year mark BONBEACH Farmers Market celebrates its first birthday this weekend on Sunday (11 October) at Bonbeach Primary School, 29-63 Breeze Street, Bonbeach. Head along from 9am -1pm and enjoy the friendly atmosphere where locals meet locals to catch up and enjoy the wide variety of freshly grown and made produce direct from the market growers. Bonbeach Farmers Market differs from other farmers markets – this one is run voluntarily by the school families. Celebrating 12 months of fun, fresh and local produce this anniversary market will see lots of new stall holders and existing ones offering birthday specials, live music, great coffee and a fun filled atmosphere for parents and kids to relax and enjoy the day. Mark it in your diary, tell your friends and meet them at Bonbeach Farmers’ Market for what promises to be a beautiful day filled with birthday celebrations of the freshest kind.