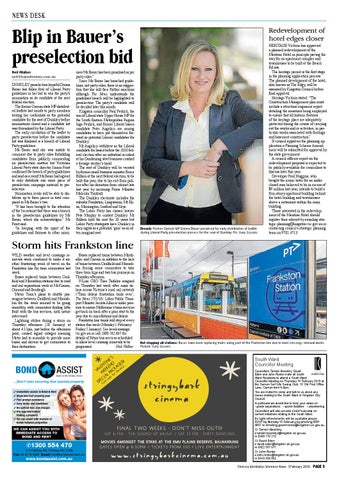 Blip in Bauer’s preselection bid Neil Walker neil@baysidenews.com.au DUNKLEY preselection hopeful Donna Bauer has fallen foul of Liberal Party guidelines in her bid to win the party’s nomination as its candidate at the next federal election. The former Carrum state MP distributed leaflets last month to party members touting her credentials as the potential candidate for the seat of Dunkley before nominations closed and a candidate list was formalised by the Liberal Party. The early circulation of the leaflet to party preselectors before the candidate list was finalised is a breach of Liberal Party guidelines. Ms Bauer said she was unable to comment due to party rules forbidding candidates from publicly commenting on preselection matters but Victorian Liberal Party state director Simon Frost confirmed the breach of party guidelines and said as a result Ms Bauer had agreed to only distribute one more piece of preselection campaign material to preselectors. Nomination rivals will be able to distribute up to three pieces in total compared to Ms Bauer’s two. “It has been brought to the attention of the Secretariat that there was a breach in the preselection guidelines by Ms Bauer, which she acknowledges,” Mr Frost said. “In keeping with the spirit of the guidelines and fairness to other nomi-

nees Ms Bauer has been penalised as per party rules.” Since Ms Bauer has breached guidelines, not party rules, there is no suggestion that she will face further sanctions although The News understands the guidelines breach will be highlighted to preselectors. The party’s candidate will be decided later this month. Kingston councillor Paul Peulich, the son of Liberal state Upper House MP for the South Eastern Metropolitan Region Inga Peulich, and former Liberal Isaacs candidate Peter Angelico are among candidates to have put themselves forward as potential Liberal candidates for Dunkley. Mr Angelico withdrew as the Liberal candidate for Isaacs before the 2010 federal election after an industrial accident at his Dandenong steel business crushed a teenage worker’s hand. The seat of Dunkley will be vacated by former small business minister Bruce Billson at the next federal election, to be held this year, due to his exit from politics after his demotion from cabinet late last year by incoming Prime Minister Malcolm Turnbull. The Dunkley electorate includes the suburbs Frankston, Langwarrin, Mt Eliza, Mornington, Seaford and Skye. The Labor Party has chosen lawyer Peta Murphy to contest Dunkley. Mr Billson held the seat for 20 years but Labor Party strategists have Dunkley in their sights as a potential ‘gain’ as an often marginal seat.

HERITAGE Victoria has approved a planned redevelopment of the Mentone Hotel in principle paving the way for an apartment complex and townhouses to be built at the Beach Rd site. The heritage permit is the first stage in the planning application process. The planned development of the hotel, also known as The Edgy, will be assessed by Kingston Council before final approval. Heritage Victoria stated: “The Construction Management plan must include a structural engineers report detailing the measures being employed to ensure that all historic features of the heritage place are adequately protected during the course of carrying out the works and or activities, in particular works associated with footings and basement construction”. If council approves the planning application a Planning Scheme Amendment will be submitted for approval by the state government. A council officers report on the redevelopment proposal is expected to be publicly available for councillors to discuss later this year. Developer Paul Huggins, who bought the iconic hotel for an undisclosed sum believed to be in excess of $9 million last year, intends to build a four-storey apartment building behind the hotel building and townhouses above a restaurant within the main building. Those interested in the redevelopment of the Mentone Hotel should register their interest by emailing strategic.planning@kingston.vic.gov.au or contacting council’s strategic planning team on 9581 4713.

Storm hits Frankston line WILD weather and level crossings removals work combined to make it another frustrating week of travel on the Frankston line for train commuters last week. Buses replaced trains between Caulfield and Moorabbin stations due to road and rail separations work at McKinnon, Ormond and Bentleigh. Metro Train’s plans to shuttle passengers between Caulfield and Moorabbin for the week seemed to be going smoothly, with commuters finding little fault with the bus services, until nature intervened. Lightning strikes during a storm on Thursday afternoon (28 January) at about 4.15pm, just before the afternoon peak, caused signal outages meaning Metro had to scramble to provide more buses and drivers to get commuters to their destination.

Buses replaced trains between Mordialloc and Carrum in addition to the lack of trains between Caulfield and Moorabbin forcing some commuters to take three train trips and two bus journeys on Thursday afternoon. V/Line CEO Theo Taifalos resigned on Thursday last week after mass delays across Victoria’s rural rail network (‘Train delays frustration boils over’, The News 27/1/16). Labor Public Transport Minister Jacinta Allan is under pressure to ensure Melbourne’s train services get back on track after a poor start to the year due to cancellations and delays. Frankston line trains will stop at every station this week (Monday 1 FebruaryFriday 5 January). See levelcrossings. vic.gov.au or call 1800 762 667 for details of future bus services scheduled to allow level crossing removals to be progressed. Neil Walker

Not stopping all stations: Buses have been replacing trains along part of the Frankston line due to level crossings removal works. Picture: Gary Sissons

You are invited to come and talk to us about any issues relating to the South Ward or Kingston City Council. In particular we would like to hear your views on: • grade separations • sports facilities • volunteering Councillors will also provide a brief overview on current initiatives relating to the South Ward. As light refreshments will be available please RSVP by Monday 15 February by phoning 9581 4907 or emailing governance@kingston.vic.gov.au