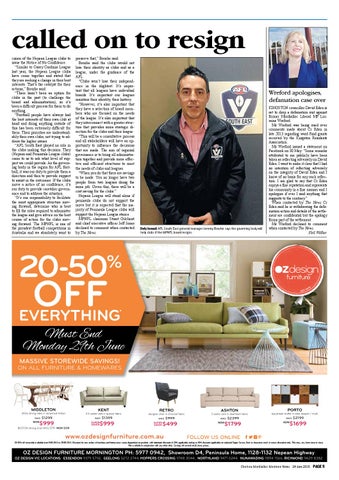 called on to resign cision of the Nepean League clubs to issue the Notice of No Confidence. “Similar to Casey Cardinia League last year, the Nepean League clubs have come together and stated that they are seeking a change in their best interests. That’s the catalyst for their actions,” Bourke said. “There hasn’t been an option for clubs in the past (to challenge the board and administration), so it’s been a difficult process for them to do anything. “Football people have always had the best interests of their own club at hand and doing anything outside of this has been extremely difficult for them. Their priorities are understandably their own clubs, not trying to address the higher issues. “AFL South East played no role in the clubs making this decision. They (Nepean and Peninsula League clubs) came to us to ask what level of support we could provide. As the governing body in the region for AFL football, it was our duty to provide them a direction and then to provide support to assist in the outcomes. If the clubs move a notice of no confidence, it’s our duty to provide caretaker governance and to address the situation. “It’s our responsibility to facilitate the most appropriate structure moving forward, determine who is best to fill the roles required to administer the league and give advice on the best course of action for the clubs moving forward. The MPNFL is one of the proudest football competitions in Australia and we absolutely want to

preserve that,” Bourke said. Bourke said the clubs would not lose their identity as clubs and as a league, under the guidance of the AFL. “Clubs won’t lose their independence in the slightest. It’s important that all leagues have individual boards. It’s important our leagues maintain their identity, their history. “However, it’s also important that they have a selection of board members who are focused on the needs of the league. It’s also important that they interconnect with a greater structure that provides some strategic direction for the clubs and their league. “This will be a consultative process and all stakeholders will have an opportunity to influence the decisions that are made. The aim of regional governance is to bring all administration together and provide more effective and efficient structures to meet the needs of clubs and leagues. “When you do that there are savings to be made. You no longer have two people from two leagues doing the same job. Given this, there will be a cost saving for the clubs.” Nepean League will stand alone if peninsula clubs do not support the move but it is expected that the majority of Peninsula League clubs will support the Nepean League stance. MPNFL chairman Stuart Gilchrist and chief executive officer Jeff Jones declined to comment when contacted by The News.

KINGSTON councillor David Eden is set to drop a defamation suit against former Mordialloc Liberal MP Lorraine Wreford. Ms Wreford was being sued over comments made about Cr Eden in late 2013 regarding ward fund grants received by the Kingston Residents Association. Ms Wreford issued a statement on Facebook on 30 May: “Some remarks attributed to me publicly have been taken as reflecting adversely on David Eden. I want to make it clear that I had no intention of reflecting adversely on the integrity of David Eden and I know of no basis for any such reflection. I am glad to say that Cr Eden enjoys a fine reputation and represents his community in a fine manner and I apologise if ever I said anything that suggests to the contrary.” When contacted by The News Cr Eden said he is withdrawing the defamation action and details of the settlement are confidential but the apology forms part of the settlement. Ms Wreford declined to comment when contacted by The News. Neil Walker

ON ALL FURNITURE &amp; HOMEWARES

2.5 seater sofa in quavos fabric WAS

3 seater sofa in downtown fabric WAS

www.ozdesignfurniture.com.au 20-50% off storewide available from 9/06/2015 to 29/06/2015. Discount for new orders of furniture and homewares varies dependant on product, with minimum discount of 20% applicable and up to 50% discount applicable on selected Super Savers, floor or clearance stock at stores discretion only. This may vary from store to store. Not available in conjunction with any other offer. Savings off normal retail stores prices.