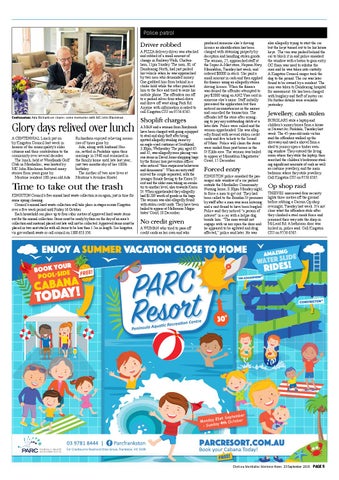 Driver robbed A PIZZA delivery driver was attacked and robbed of a small amount of change in Railway Walk, Cheltenham, 11pm Sunday. The man, 30, of Dandenong North, had just parked his vehicle when he was approached by two men who demanded money. One grabbed him from behind in a choke hold while the other punched him to the face and tried to seize his mobile phone. The offenders ran off to a parked silver four-wheel-drive and drove off west along Park Rd. Anyone with information is asked to call Kingston CIU on 9556 6565. Centenarian: Ada Richardson shares some memories with MC John Blackman.

Glory days relived over lunch A CENTENNIAL Lunch put on by Kingston Council last week in honour of the municipality’s elder citizens and their contribution to the community over several decades. The lunch, held at Woodlands Golf Club in Mordialloc, was hosted by MC John Blackman featured many stories from years gone by. Mentone resident 100-year-old Ada

Richardson enjoyed relieving memories of times gone by. Ada, along with husband Horrie, settled in Parkdale upon their marriage in 1940 and remained in the family home until late last year; just two months shy of her 100th birthday. The mother of two now lives at Mentone’s Avonlea Hostel.

Time to take out the trash KINGSTON Council’s free annual hard waste collection is on again, just in time for some spring cleaning. Council’s annual hard waste collection will take place in stages across Kingston over a five week period until Friday 16 October. Each household can place up to four cubic metres of approved hard waste items out for the annual collection. Items must be ready by 6am on the day of an area’s collection and material placed out late will not be collected. Approved items must be placed in two neat stacks with all items to be less than 1.5m in length. See kingston. vic.gov.au/hard-waste or call council on 1300 653 356.

Shoplift charges A MAN and a woman from Braybrook have been charged with going equipped to steal and shop theft after being spotted allegedly stealing items by an eagle-eyed customer at Southland, 3.30pm, Wednesday. The pair, aged 65 and 35, was allegedly seen placing various items in David Jones shopping bags by the former loss prevention officer who noticed “their suspicious behaviour and demeanour”. When security staff arrived the couple separated, with the younger female fleeing to the Karen St exit and the older man taking an escalator to another level, also towards Karen St. When apprehended they allegedly had $1289 worth of goods in the bags. The woman was also allegedly found with stolen credit cards. They have been bailed to appear at Melbourne Magistrates’ Court, 18 December.

produced someone else’s driving licence as identification has been charged with obtaining property by deception and handling stolen goods. The woman, 27, approached staff at the Super-A-Mart store, Nepean Hwy, Moorabbin, Tuesday last week, and ordered $8000 in stock. She paid a small amount in cash and then applied for finance using an allegedly stolen driving licence. When the finance was denied the offender attempted to pay $2000 using an ANZ Visa card in someone else’s name. Staff initially processed the application but then noticed inconsistencies in the names and cancelled the transaction. The offender left the store after arranging to pay any outstanding debts at a later date. Police were called and the woman apprehended. She was allegedly found with several stolen credit cards and five tickets to the Sound of Music. Police will claim the items were raided from post boxes in the St Kilda area. The woman was bailed to appear at Moorabbin Magistrates’ Court, 15 December.

Forced entry KINGSTON police smashed the passenger side window of a car parked outside the Mordialloc Community Nursing home, 8.30pm Monday night, to force a man to get out. They had been called to the Brindisi St premises by staff after a man was seen loitering and a unit found to have been burgled. Police said they noticed “a person of interest” in a car with a kelpie dog beside him. “The man would not engage with us nor open the door and he appeared to be agitated and drug affected,” police said later. He was

also allegedly trying to start the car but the keys turned out to be his house keys. The van was parked behind the car to block it in and police smashed the window with a baton to gain entry. OC foam was used to subdue the man and he was taken into custody. A Kingston Council ranger took the dog to the pound. The car was later found to be owned by a resident. The man was taken to Dandenong hospital for assessment. He has been charged with burglary and theft of motor car. No further details were available yesterday.

Jewellery, cash stolen BURGLARS stole a laptop and children’s money boxes from a house in Stewart Av, Parkdale, Tuesday last week. The 45-year-old male victim said the offenders walked up the driveway and used a shovel from a shed to jemmy open a timber awning window. They entered the living room where they stole the laptop, then searched the children’s bedrooms stealing significant amounts of cash as well as costume jewellery, and the main bedroom where they stole jewellery. Call Kingston CIU on 9556 6565.

Op shop raid THIEVES unscrewed four security lights three metres off the ground before robbing a Carrum Op shop overnight, Tuesday last week. It’s not clear what the offenders stole after they climbed a steel mesh fence and jemmied their way into the shop in McLeod Rd. A bathroom door was kicked in, police said. Call Kingston CIU on 9556 6565.