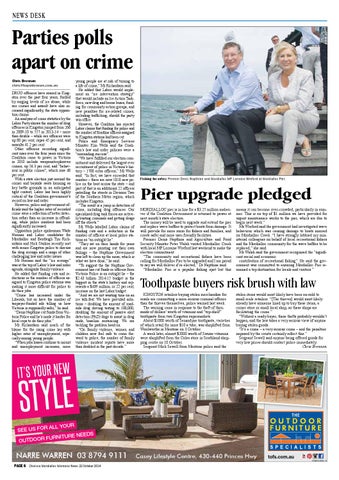 Parties polls apart on crime Chris Brennan chris@baysidenews.com.au DRUG offences have soared in Kingston over the past four years, fuelled by surging levels of ice abuse, while sex crimes and assault have also increased significantly, the state opposition claims. An analysis of crime statistics by the Labor Party shows the number of drug offences in Kingston jumped from 266 in 2009-10 to 557 in 2013-14 – more than double – while sex offences were up 80 per cent, rapes 45 per cent, and assaults 41.2 per cent. Other offences recording significant rises over the four years since the Coalition came to power in Victoria in 2010 include weapons/explosives crimes, up 56.3 per cent, and “behaviour in public crimes”, which rose 48 per cent. With a state election just around the corner and bayside seats looming as key battle grounds in an anticipated tight contest, Labor has been highly critical of the Coalition government’s record on law and order. However, police and government officials said the higher rates of recorded crime were a reflection of better detection rather than an increase in offending, while police numbers had been significantly increased. Opposition police spokesman Wade Noonan and Labor candidates for Mordialloc and Bentleigh Tim Richardson and Nick Staikos recently met with senior Kingston police to discuss the drug scourge and a range of other challenging law and order issues. Mr Noonan said the “ice scourge” was at the top of Labor’s law and order agenda, alongside family violence. He added that funding cuts and reductions in the number of officers assigned to Kingston police stations was making it more difficult for police to do their jobs. “Crime has increased under the Liberals, but so have the number of taxpayer-funded ads telling us how Victoria is supposedly safer,” he said. “Denis Napthine cut funds from Victoria Police and he’s made it harder for local cops to do their jobs.” Mr Richardson said much of the blame for the rising crime lay with higher rates of unemployment, especially among young people. “When jobs losses continue to mount and unemployment increases, more

young people are at risk of turning to a life of crime,” Mr Richardson said. He added that Labor would implement an “ice intervention strategy” that would include an Ice Action Taskforce, new drug and booze buses, funding for community action groups, and new penalties for ice-related crimes, including trafficking, should the party win office. However, the Coalition has rejected Labor claims that funding for police and the number of frontline officers assigned to Kingston stations had been cut. Police and Emergency Services Minister Kim Wells said the Coalition’s law and order policies were a “resounding success”. “We have fulfilled our election commitment and delivered the largest ever recruitment of police in Victoria’s history – 1700 extra officers,” Mr Wells said. “In fact, we have exceeded that number – there are now 1818 new police on the beat across the state – and part of that is an additional 22 officers patrolling the streets in Division Two of the Southern Metro region, which includes Kingston. “The result is a jump in detection of crime, including drug offences. Our specialised drug task forces are actively busting criminals and getting drugs off the streets.” Mr Wells labelled Labor claims of funding cuts and a reduction in the number of officers at local police stations as “an outright lie”. “They sat on their hands for years and are now pointing out their own failings – the Napthine Government was left to clean up the mess, which is what we have done,” he said. “To suggest the the Napthine Government has cut funds or officers from Victoria Police is an outright lie – the $2.43 billion 2014-15 budget is the biggest in the state’s history and represents a $439 million, or 22 per cent, increase on the last Labor budget. “And we are not wasting time on an ice talk-fest. We have provided solutions – doubling the amount of roadside drug driving testing to 100,000, doubling the amount of passive alert detection (PAD) dogs to assist in drug raids, baseline sentencing. We are tackling the problem head on. “On family violence, women and children now feel safe to come forward to police, the number of family violence incident reports have more than doubled in the past decade.”

Pier upgrade pledged MORDIALLOC pier is in line for a $3.25 million makeover if the Coalition Government is returned to power at next month’s state election. The money will be used to upgrade and extend the pier and replace wave baffles to protect boats from damage. It will provide for more room for fishers and families, and create safer and more user-friendly facilities. Premier Denis Napthine and Agriculture and Food Security Minister Peter Walsh visited Mordialloc Creek with local MP Lorraine Wreford last weekend to make the election commitment. “The community and recreational fishers have been calling for Mordialloc Pier to be upgraded and I am proud to say we will deliver if re-elected,” Dr Napthine said. “Mordialloc Pier is a popular fishing spot but this

means it can become over-crowded, particularly in summer. This is on top of $1 million we have provided for urgent maintenance works to the pier, which are due to begin next week.” Ms Wreford said the government had investigated wave behaviour which was causing damage to boats moored on Mordialloc Creek. “I have strongly lobbied my ministerial colleagues on behalf of local recreational fishers and the Mordialloc community for the wave baffles to be replaced,” she said. Mr Walsh said the government recognised the “significant social and economic contribution of recreational fishing”. He said the government was committed to ensuring Mordialloc Pier remained a top destination for locals and visitors.”

Toothpaste buyers risk brush with law KINGSTON retailers buying stolen merchandise for resale are committing a more serious criminal offence than the thieves themselves, police warned last week. The warning came in response to the theft of thousands of dollars’ worth of vitamins and “top-shelf” toothpaste from two Kingston supermarkets. About $1000 worth of Sensodyne toothpaste, varieties of which retail for more $10 a tube, was shoplifted from Woolworths in Mentone on 3 October. A week later, almost $2000 worth of Swisse vitamins were shoplifted from the Coles store in Southland shopping centre on 10 October. Sergeant Mick Sewell from Mentone police said the

stolen items would most likely have been on-sold to small scale retailers. “[The thieves] would most likely already have someone lined up to buy these items, a corner store or small local shop, so these shops are facilitating the crime.” “Without a ready buyer, these thefts probably wouldn’t happen, and the law takes a very serious view of anyone buying stolen goods. “It’s a crime – a very serious crime – and the penalties imposed by the courts certainly reflect this.” Sergeant Sewell said anyone being offered goods for very low prices should contact police immediately. Chris Brennan