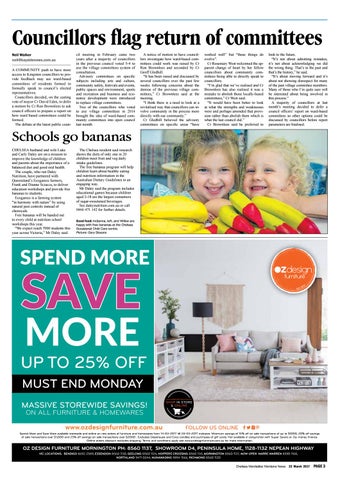 Councillors flag return of committees Neil Walker neil@baysidenews.com.au A COMMUNITY push to have more access to Kingston councillors to provide feedback may see ward-based committees of residents formed to formally speak to council’s elected representatives. Councillors decided, on the casting vote of mayor Cr David Eden, to defer a motion by Cr Ron Brownlees to ask council officers to prepare a report on how ward based committees could be formed. The debate at the latest public coun-

A notice of motion to have councillors investigate how ward-based committees could work was raised by Cr Ron Brownlees and seconded by Cr Geoff Gledhill. “It has been raised and discussed by several councillors over the past few weeks following concerns about the demise of the previous village committees,” Cr Brownlees said at the meeting. “I think there is a need to look at a revitalised way that councillors can involve community in the process more directly with our community.” Cr Gledhill believed the advisory committees on specific areas “have

worked well” but “these things do evolve”. Cr Rosemary West welcomed the apparent change of heart by her fellow councillors about community committees being able to directly speak to councillors. “I’m glad that we’ve realised and Cr Brownlees has also realised it was a mistake to abolish those locally-based committees,” Cr West said. “It would have been better to look at what the strengths and weaknesses were and perhaps amended that provision rather than abolish them which is what the last council did.” Cr Brownlees said he preferred to

look to the future. “It’s not about admitting mistakes, it’s not about acknowledging we did the wrong thing. That’s in the past and that’s the history,” he said. “It’s about moving forward and it’s about not showing disrespect for many of the past village committee members. Many of those who I’m quite sure will be interested about being involved in this process.” A majority of councillors at last month’s meeting decided to defer a council officers’ report on ward-based committees so other options could be discussed by councillors before report parameters are finalised.

Schools go bananas CHELSEA husband and wife Luke and Carly Daley are on a mission to improve the knowledge of children and parents about the importance of a balanced diet and good oral health. The couple, who run Daley Nutrition, have partnered with Queensland’s Ecoganics farmers, Frank and Dianne Sciacca, to deliver education workshops and provide free bananas to students. Ecoganics is a farming system “in harmony with nature” by using natural pest controls instead of chemicals. Free bananas will be handed out to every child at nutrition school workshops this year. “We expect reach 7000 students this year across Victoria,” Mr Daley said.

The Chelsea resident said research shows the diets of only one in 20 children meet fruit and veg daily intake guidelines. The free bananas program will help children learn about healthy eating and nutrition information in the Australian Dietary Guidelines in an engaging way. Mr Daley said the program includes educational games because children aged 2-18 are the largest consumers of sugar-sweetened beverages. See daleynutrition.com.au or call 0466 471 142 for further details. Good food: Indianna, left, and Willow are happy with free bananas at the Chelsea Occasional Child Care centre. Picture: Gary Sissons

www.ozdesignfurniture.com.au Spend More and Save More available storewide and online on new orders of furniture and homewares from 14-03-2017 till 28-03-2017 inclusive. Minimum savings of 15% off on sale transactions of up to $1000, 20% off savings of sale transactions over $1,000 and 25% off savings on sale transactions over $2000 . Excludes Glasshouse and Circa candles and purchases of gift cards. Not available in conjunction with Super Savers or Zip money finance. Online orders discount excludes shipping. Terms and conditions apply see www.ozdesignfurniture.com.au for more information.