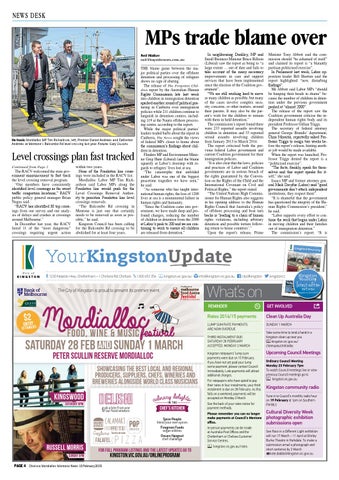 MPs trade blame over Neil Walker neil@baysidenews.com.au THE blame game between the major political parties over the offshore detention and processing of refugees shows no sign of abating. The release of The Forgotten Children report by the Australian Human Rights Commission late last week into children in immigration detention sparked another round of political posturing in Canberra over immigration policies while 211 children continue to languish in detention centres, including 119 at the Nauru offshore processing centre, according to the report. While the major political parties’ leaders traded barbs about the report in Canberra, The News sought the views of federal MPs closer to home about the commission’s findings about children in detention. Flinders MP and Environment Minister Greg Hunt (Liberal) laid the blame squarely at Labor’s doorstep with regards to refugees’ lives lost at sea. “The catastrophe that unfolded under Labor was one of the biggest peacetime tragedies we have seen,” he said. “As someone who has taught international human rights, the loss of 1200 lives at sea is a monumental failure in human rights and humanity. “Since the Coalition came into government, we have made deep and profound changes, reducing the number of children in detention from the 2000 at Labor’s peak to 200 and we are continuing to work to ensure all children are released from detention.”

In neighbouring Dunkley, MP and Small Business Minister Bruce Billson (Liberal) saw the report as being to “a large extent … out of date and fails to take account of the many necessary improvements in care and support services that have been implemented since the election of the Coalition government”. “We are still working hard to move as many children as possible, but many of the cases involve complex security concerns, or other matters, around their parents. It may also be the parent’s wish for the children to remain with them in held detention.” The commission’s report found there were 233 reported assaults involving children in detention and 33 reported sexual assaults involving children from January 2013 to March 2014. The report criticised both the previous federal Labor government and current Coalition government for their immigration policies. “It is also clear that the laws, policies and practices of Labor and Coalition governments are in serious breach of the rights guaranteed by the Convention on the Rights of the Child and the International Covenant on Civil and Political Rights,” the report stated. “The United Nations High Commissioner for Human Rights also suggests in his opening address to the Human Rights Council that Australia’s policy of offshore processing and boat turn backs is ‘leading to a chain of human rights violations, including arbitrary detention and possible torture following return to home countries’.” Upon the report&#39;s release, Prime

Minister Tony Abbott said the commission should “be ashamed of itself” and claimed its report is “a blatantly partisan politicised exercise”. In Parliament last week, Labor opposition leader Bill Shorten said the report highlighted “new, disturbing findings”. Mr Abbott said Labor MPs “should be hanging their heads in shame” because the number of children in detention under the previous government peaked at “almost 2000”. The release of the report saw the Coalition government criticise the independent human rights body and its president Professor Gillian Triggs. The secretary of federal attorney general George Brandis’ department, Chris Moraitis, reportedly asked Professor Triggs to resign two weeks before the report’s release, hinting another job would be made available. When the report was launched, Professor Triggs denied the report is a “politicised exercise”. “The facts, frankly, speak for themselves and this report speaks for itself,” she said. Isaacs MP and former attorney general Mark Dreyfus (Labor) said “good governments don’t attack independent institutions, they respect them”. “It is shameful that the government has questioned the integrity of the Human Rights Commission’s president,” he said. “Labor supports every effort to continue the work that began under Labor in moving children and their families out of immigration detention.” The commission’s report: “It is

Official Journal of the City of Kingston • Februar y / March 2015

Back to YourCity school safety Kingston Your City

The City of Kingston is proud to present its premier event

For full program listings and the latest updates go to

grab a bite from one of our food vendors

THIRD INSTALMENT DUE: SATURDAY 28 FEBRUARY ACCEPTED: MONDAY 2 MARCH Kingston ratepayers’ lump sum payments were due on 15 February. If you have not yet paid your lump some payment, please contact Council immediately. Late payments will attract additional charges. For ratepayers who have opted to pay their rates in four instalments, your third instalment is due on 28 February. As this falls on a weekend, payments will be accepted on Monday 2 March. See the back of your rates notice for payment methods. Please remember you can no longer make payments at Council&#39;s Mentone office. In-person payments can be made at Australia Post Offices and the Cheltenham or Chelsea Customer Service Centres. kingston.vic.gov.au/rates

Spotlight on business in Kingston

Take some time to lend a hand in a Kingston clean up near you kingston.vic.gov.au/ cleanupaustraliaday