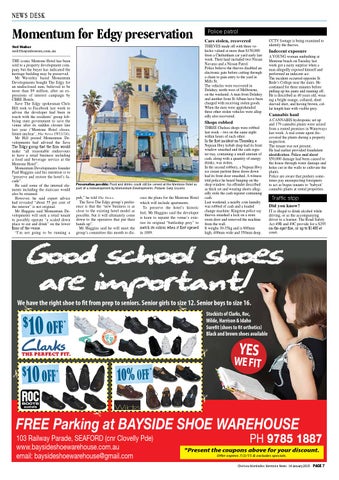 Momentum for Edgy preservation Neil Walker neil@baysidenews.com.au THE iconic Mentone Hotel has been sold to a property development company but the buyer has indicated the heritage building may be preserved. Mt Waverley based Momentum Developments bought The Edgy for an undisclosed sum, believed to be more than $9 million, after an expressions of interest campaign by CBRE Hotels. Save The Edgy spokesman Chris Hill took to Facebook last week to advise the developer had been in touch with the residents’ group lobbying state government to save the venue after its sudden closure late last year (‘Mentone Hotel closes, future unclear’, The News 19/11/14). Mr Hill posted Momentum Developments had advised the Save The Edgy group that the firm would make “all reasonable endeavours to have a retail business including a food and beverage service at the Mentone Hotel”. Momentum Developments founder Paul Huggins said his intention is to “preserve and restore the hotel’s facade”. He said some of the internal elements including the staircase would also be retained. However, he said expert advice had revealed “about 55 per cent of the interior” is not original. Mr Huggins said Momentum Developments will seek a retail tenant to possibly operate “a scaled down place to eat and drink” on the lower floor of the venue. “I’m not going to be running a

Police patrol Cars stolen, recovered THIEVES made off with three vehicles valued at more than $150,000 from a Cheltenham car yard early last week. Their haul included two Nissan Navaras and a Nissan Patrol. Police believe the thieves disabled an electronic gate before cutting through a chain to gain entry to the yard in Mills St. The vehicles were recovered in Delahey, north-west of Melbourne, on the weekend. A man from Delahey and another from St Albans have been charged with receiving stolen goods. When the men were apprehended three other stolen vehicles were allegedly also recovered.

Preservation possible: Food and drinks could still be served at the Mentone Hotel as part of a redevelopment by Momentum Developments. Picture: Gary Sissons

pub,” he told The News. The Save The Edgy group’s preference is that the “new business is as close to the existing hotel model as possible, but it will ultimately come down to the operators that put their hands up”. Mr Huggins said he will meet the group’s committee this month to dis-

cuss the plans for the Mentone Hotel which will include apartments. To preserve the hotel’s historic feel, Mr Huggins said the developer is keen to repaint the venue’s exterior its original “battleship grey” to match its colour when it first opened in 1889.

THREE Chelsea shops were robbed last week – two on the same night within hours of each other. In the first incident on Thursday, a Nepean Hwy kebab shop had its front window smashed and the cash register tray, containing a small amount of cash, along with a quantity of energy drinks, was stolen. In the second robbery, a Nepean Hwy ice cream parlour three doors down had its front door smashed. A witness told police he heard banging on the shop window. An offender described as thick set and wearing shorts allegedly stole the cash register containing cash. Last weekend, a nearby coin laundry was robbed of cash and a loaded change machine. Kingston police say thieves smashed a lock on a store room door and removed the machine from the wall. It weighs 30-35kg and is 600mm high, 400mm wide and 350mm deep.

CCTV footage is being examined to identify the thieves.

Indecent exposure A YOUNG woman sunbathing at Mentone beach on Tuesday last week got a nasty surprise when a man allegedly exposed himself and performed an indecent act. The incident occurred opposite St Bede’s College near the stairs. He continued for three minutes before pulling up his pants and running off. He is described as 40 years old, wearing a bright orange, collared, short sleeved shirt, and having brown, collar length hair with visible grey.

Cannabis haul A CANNABIS hydroponic set up and 179 cannabis plants were seized from a rented premises in Waterways last week. A real estate agent discovered the plants during a property inspection. The tenant was not present. He had earlier provided fraudulent identification. Police said about $50,000 damage had been caused to the house through water damage and holes cut in the walls to cultivate the plants. Police are aware that pushers sometimes pay unsuspecting foreigners to act as bogus tenants to ‘babysit’ cannabis plants at rental properties.

Traffic stop Did you know? IT is illegal to drink alcohol while driving, or as the accompanying driver to a learner. The Road Safety Act 49B and 49C provide for a $295 on-the-spot fine, or up to $1400 at court.

We have the right shoe to fit from prep to seniors. Senior girls to size 12. Senior boys to size 16.