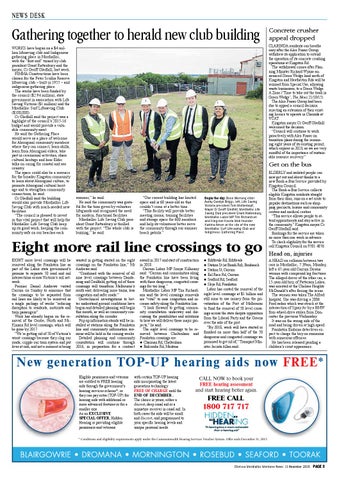 Gathering together to herald new club building WORKS have begun on a $4 million lifesaving club and Indigenous gathering place in Mordialloc, with the “first sod” turned by club president Grant Rattenbury and the mayor, Cr Geoff Gledhill, last week. FIMMA Constructions have been chosen for the Peter Scullin Reserve lifesaving club – built in 1955 – and indigenous gathering place. The works have been funded by the council ($2.94 million), state government in association with Life Saving Victoria ($1 million) and the Mordialloc Surf Lifesaving Club ($100,000). Cr Gledhill said the project was a highlight of the council’s 2015-16 budget and would provide a valuable community asset. He said the Gathering Place would serve as a place of welcome for Aboriginal community members where they can connect, learn skills, learn from Aboriginal elders, take part in ceremonial activities, share cultural heritage and hear Elder talks on caring for coastal and sea country. The space could also be a resource for the broader Kingston community to learn about Aboriginal culture, to promote Aboriginal cultural heritage and to strengthen community connections, he said. Cr Gledhill said the building would also provide Mordialloc Life Saving Club with much-needed new facilities. “The council is pleased to invest in this vital project that will help the Mordialloc Life Saving Club keep up its good work, keeping the community safe on our beaches each

CLARINDA residents can breathe easy after the Alex Fraser Group withdrew its application to extend the operation of its concrete crushing operations at Kingston Rd. The withdrawal comes after Planning Minister Richard Wynne announced Green Wedge land north of Kingston and Heatherton Rds will be rezoned from Special Use, allowing waste businesses, to a Green Wedge A Zone (‘Time to take out the trash in Green Wedge’, The News 21/10/15). The Alex Fraser Group had been due to appeal a council decision rejecting an extension of their existing licence to operate in Clarinda at VCAT. Kingston mayor Cr Geoff Gledhill welcomed the decision. “Council will continue to work proactively with Alex Fraser on transition plans during the remaining eight years of its existing permit, which expires in 2023, as we are very mindful of the importance of sustainable resource recovery.”

Get on the bus

summer,” he said. He said the community was grateful for the time given by volunteer lifeguards and recognised the need for modern, functional facilities. Mordialloc Life Saving Club president Grant Rattenbury is thrilled with the project. “The whole club is buzzing,” he said.

“Our current building has limited space and is 60 years old so this couldn’t come at a better time. “This facility will provide better meeting rooms, training facilities and storage space for 600 members and help its volunteers better serve the community through our summer beach patrols.”

Eight more rail line crossings to go EIGHT more level crossings will be removed along the Frankston line as part of the Labor state government’s promise to separate 50 road and rail intersections across Victoria’s rail network. Premier Daniel Andrews visited Carrum on Sunday to announce that the crossings to be separated from rail lines are likely to be removed as a single package of works “reducing disruption to residents, motorists and train passengers”. Work has already begun on the removal of the Centre, North and McKinnon Rd level crossings, which will be gone by 2017. “We’re getting rid of 50 of Victoria’s worst crossings because they clog our roads, cripple our train system and put lives at risk, and not a moment is being

wasted in getting started on the eight crossings on the Frankston line,” Mr Andrews said. “Combined with the removal of all nine level crossings between Dandenong and Caulfield, getting rid of these crossings will transform Melbourne’s south east, delivering more trains, less congestion and safer roads.” Geotechnical investigations to better understand ground conditions have begun and detailed planning will begin this month, as well as community consultation along the corridor. Pop up information stands will be installed at stations along the Frankston line and community information sessions will be held in the coming weeks. Detailed planning and community consultation will continue through 2016, in preparation for a contract

award in 2017 and start of construction in 2018. Carrum Labor MP Sonya Kilkenny said: “Carrum and communities along the Frankston line have been living with these dangerous, congested crossings for too long.” Mordialloc Labor MP Tim Richardson said the level crossings removals are “vital” to ease congestion and increase safety along the Frankston line. “I look forward to getting community consultation underway and discussing the possibilities and solutions to how we will deliver these major projects,” he said. The eight level crossings to be removed between Cheltenham and Frankston crossings are: n Charman Rd, Cheltenham n Balcombe Rd, Mentone

Edithvale Rd, Edithvale n Station St (at Bondi Rd), Bonbeach n Station St, Carrum n Eel Race Rd, Carrum n Seaford Rd, Seaford n Skye Rd, Frankston Labor has costed the removal of the eight level crossings at $1 billion and still aims to use money from the privatisation of the Port of Melbourne to fund the removal of 50 level crossings across the state despite opposition from the Liberal Party and the Greens over the sale of the port. “By 2018, work will have started or finished on more than half of the 50 dangerous and congested crossings we promised to get rid of,” Transport Minister Jacinta Allan said. n

ELDERLY and isolated people can now get out and about thanks to a new Book-a-Bus Service provided by Kingston Council. The Book-a-Bus Service collects eligible Kingston residents straight from their door, runs on a set route to popular destinations such as shopping precincts, leisure and community centres and medical centres. “This service allows people to attend appointments and stay active in the community,” Kingston mayor Cr Geoff Gledhill said. Bookings for the service are taken no more than one week in advance. To check eligibility for the service call Kingston Council on 9581 4876.

Head on, injuries A HEAD on collision between two cars in Mordialloc, 7.39am, Monday, left a 47-year-old Carrum Downs woman with compound leg fractures. The alleged driver of the other car, a 15-year-old boy, of Patterson Lakes, was arrested at the Chelsea Heights McDonald’s after fleeing the scene. The woman was taken The Alfred hospital. She was driving a 2006 Ford sedan which was struck at the intersection of Spray Av by a BMW four-wheel-drive stolen from Doncaster the previous Wednesday. It was on the wrong side of the road and being driven at high speed. Frankston Embona detectives expect to charge the boy on summons with numerous offences. He has been released pending a children’s court appearance.

with certain hearing needs to beTOP-UP experienced to be aids incorporating the islatest appreciated, which why we’re generation offering atechnology FREE TRIAL to the FREE OFpeople CHARGE until theto rst 50 who respond DECEMBER END OF SEPTEMBER. this offer. Hear and enjoy the The choice isfor yours, eitherYou a will difference yourself. discreet, discrete deep canal aid or a be impressed. miniature receiver in canal aid. In As an EXCLUSIVE short term both cases theOFFER, aids will Hidden be small SPECIAL discreet, andHearing discrete, programmed is and providing eligibleto your specific hearing levels pensioners and veterans and unique personal needs.