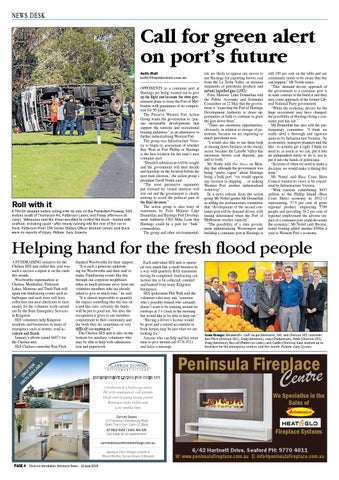 A TRUCK skidded before rolling onto its side on the Frankston Freeway, 500 metres south of Thompson Rd, Patterson Lakes, last Friday afternoon (5 June). Witnesses said the driver wrestled to control the truck - loaded with seafood, including squid - after nearly running into the rear of the car in front. Patterson River CFA Senior Station Officer Michael James said there were no reports of injury. Picture: Gary Sissons

OPPONENTS to a container port at Hastings are being warned not to give up the fight just because the state government plans to lease the Port of Melbourne with guarantees of no competition for 50 years. The Preserve Western Port Action Group wants the government to “pursue sustainable developments that support the tourism and recreational boating industries” as an alternative to further industrialising Western Port. The group was Infrastructure Victoria to begin its assessment of whether Bay West in Port Phillip or Hastings is the best location for the state’s next container port. “Detailed submissions will be sought and the government will then decide and legislate on the location before the next state election,” the action group’s president Geoff Nottle said. “The most persuasive arguments put forward by vested interests will win out and the government is clearly seeking to avoid the political pain of the final decision.” The action group is also wary of statements by Ports Minister Luke Donnellan and Hastings Port Development Authority CEO Mike Lean that Hastings could be a port for “bulk” commodities. The group and other environmental-

ists are likely to oppose any moves to use Hastings for exporting brown coal from the La Trobe Valley or increase shipments of petroleum products and natural liquefied gas (LNG). Ports Minister Luke Donnellan told the Public Accounts and Estimates Committee on 22 May that the government is “expecting the Port of Hastings Development Authority to chase opportunities in bulk to continue to grow the port down there”. “There are enormous opportunities, obviously, in relation to storage of petroleum, because we are importing so much petroleum now. “I would also like to see them look at chasing down business in the energy sector, because the Latrobe Valley has enormous brown coal deposits, gas and so forth.” Mr Nottle told The News on Monday that although the government was being “pretty vague” about Hastings being a bulk port, “we would oppose any increase in shipping … or making Western Port another industrialised waterway”. In a news release from the action group Mr Nottel quotes Mr Donnellan as telling the parliamentary committee that “development of the second container port will be demand driven, with timing determined when the Port of Melbourne reaches capacity”. “The possibility of a state government industrialising Westernport and building a container port at Hastings is

still 100 per cent on the table and our community needs to be aware that this can happen,” Mr Nottle states. “This ‘demand driven’ approach of the government to a container port is in stark contrast to the build it and they may come approach of the former Liberal National Party government. “While the economic drivers for the huge investment may have changed, the possibility of Hastings being a container port has not.” Mr Donnellan has also told the parliamentary committee: “I think we really need a thorough and rigorous analysis by Infrastructure Victoria - by economists, transport planners and the like - to actually get it right. I think we need to, as much as we can, put it into an independent entity to do it, not to put it into the hands of politicians. “In terms of when we need to make a decision, we would make it during this term.” Mr Nottel said Bass Coast Shire Council wanted its views to be considered by Infrastructure Victoria. “With tourism contributing $653 million to the Phillip Island (Bass Coast Shire) economy in 2012-13 representing, 37.9 per cent of gross regional product, employing 5700 people and providing 38.2 per cent of regional employment the adverse impact of a container port could devastate the economy,” Mr Nottel said. Recreational boating added another $500m a year to Western Port’s economy.

Helping hand for the fresh flood people thanked Woolworths for their support. “It is such a generous undertaking for Woolworths and their staff to make. Fundraising events like this through our corporate neighbours takes so much pressure away from our volunteer members who are already asked to give so much time,” he said. “It is almost impossible to quantify the impact something like this has on a unit like ours, certainly the funds will be put to good use, but also, the recognition it gives to our members commitment to their community and the work they do, sometimes in very difficult circumstances.” The Chelsea SES unit is also on the lookout for auxiliary volunteers who may be able to help with administration and paperwork.

Each individual SES unit is operated very much like a small business in a way with quarterly BAS statements having be completed, fundraising collection tins to be collected, counted and banked from many Kingston businesses. SES spokesman Phil Wall said the volunteer roles may suit “someone who’s possibly retired who certainly doesn’t want to be running around on rooftops at 3 o’clock in the morning but would like to be able to help out.” “Having a driver’s license would be great and a retired accountant or book keeper may be just what we are looking for.” Anyone who can help and has some time to give should call 9776 0721 and leave a message.

A FUNDRAISING initiative for the Chelsea SES unit earlier this year was such a success a repeat is on the cards this month. Woolworths supermarkets at Chelsea, Mordialloc, Patterson Lakes, Mentone and Thrift Park will again run fundraising events such as barbeques and each store will have collection tins near checkouts to raise money for the volunteer work carried out by the State Emergency Services in Kingston. SES volunteers help Kingston residents and businesses in times of emergency such as storms, road accidents and floods. January’s efforts raised $4871 for the Chelsea unit. SES Chelsea controller Ron Fitch

We Specialise in the Sales of