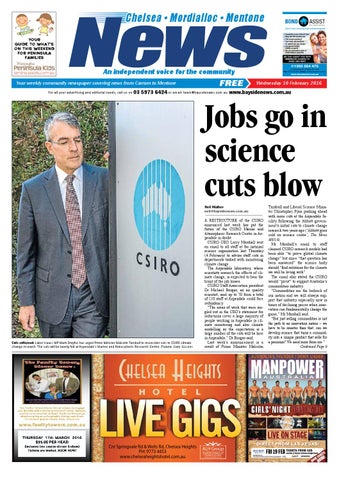 Chelsea • Mordialloc • Mentone ...Don’t miss securing that wanted property ✓ Immediate access to Bond & Rent ✓ Move into that property now ✓ Fast prompt assistance ✓ Easy terms and conditions ✓ No upfront fees and charges ✓ Pre approval before finding a property ✓ We can assist with transfer of bonds between properties

A RESTRUCTURE of the CSIRO announced last week has put the future of the CSIRO Marine and Atmospheric Research Centre in Aspendale in doubt. CSIRO CEO Larry Marshall sent an email to all staff at the national science organisation last Thursday (4 February) to advise staff cuts in departments tasked with monitoring climate change. The Aspendale laboratory, where scientists research the effects of climate change, is expected to bear the brunt of the job losses. CSIRO Staff Association president Dr Michael Borgas, an air quality scientist, said up to 70 from a total of 110 staff at Aspendale could face redundancy. “The areas of work that were singled out in the CEO’s statement for reductions cover a large majority of people working in Aspendale in climate monitoring and also climate modelling so the expectation is a large number of the cuts will be here in Aspendale,” Dr Borgas said. Last week’s announcement is a result of Prime Minister Malcolm

Turnbull and Liberal Science Minister Christopher Pyne pushing ahead with more cuts at the Aspendale facility following the Abbott government’s initial cuts to climate change research two years ago (‘Abbott goes cold on science centre’, The News 4/6/14). Mr Marshall’s email to staff claimed CSIRO research models had been able “to prove global climate change” but since “that question has been answered” the science body should “find solutions for the climate we will be living with”. The email also stated the CSIRO would “pivot” to support Australia’s commodities industry. “Commodities are the bedrock of our nation and we will always support that industry especially now in times of declining prices when innovation can fundamentally change the game,” Mr Marshall said. “But just selling commodities is not the path to an innovation nation – we have to be smarter than that: can we develop science that turns a commodity into a unique product that sells for a premium? We need more from ore.” Continued Page 6