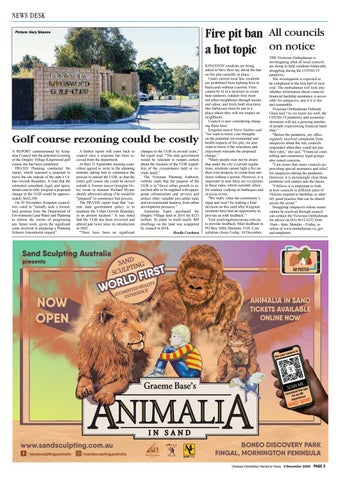 Fire pit ban All councils a hot topic on notice

Golf course rezoning could be costly A REPORT commissioned by Kingston Council into the potential rezoning of the Dingley Village Kingswood golf course site has been completed. PRAXIS Planning conducted the report, which assessed a proposal to move the site outside of the state’s Urban Growth Boundary. It read that the estimated consultant, legal, and operational costs to fully progress a proposed change to the UGB would be approximately $442,500. On 30 November, Kingston councillors voted to “initially seek a formalised position from the Department of Environment Land Water and Planning to inform the merits of progressing any future work, given the significant costs involved in preparing a Planning Scheme Amendment request”.

A further report will come back to council once a response has been received from the department. At their 21 September meeting councillors agreed to write to the planning minister asking him to commence the process to amend the UGB, so that the entire golf course site could be moved outside it. Former mayor Georgina Oxley wrote to minister Richard Wynne shortly afterward asking if he would be “prepared” to commence that process. The PRAXIS report read that “current state government policy is to maintain the Urban Growth Boundary in its present location.” It was noted that the UGB has been reviewed and altered just twice since its introduction in 2002. “There have been no significant

changes to the UGB in several years,” the report read. “The state government would be reluctant to reopen contest about the location of the UGB regardless of the circumstance (add or exclude land).” The Victorian Planning Authority website reads that the purpose of the UGB is to “direct urban growth to areas best able to be supplied with appropriate infrastructure and services and protect other valuable peri-urban land, and environmental features, from urban development pressures.” Australian Super purchased the Dingley Village land in 2014 for $125 million. Its plans to build nearly 800 dwellings on the land was scuppered by council in 2018. Brodie Cowburn

KINGSTON residents are being asked to have their say about the ban on fire pits currently in place. Under current local law, residents are prohibited from lighting fires in backyards without a permit. Fires cannot be lit in a structure to create heat outdoors, outdoor fires must not affect neighbours through smoke and odour, and brick-built structures like barbecues must be put in a place where they will not impact on neighbours. Council is now considering changing these laws. Kingston mayor Steve Staikos said “we want to know your thoughts on the potential environmental and health impacts of fire pits, we also want to know if the relaxation and enjoyment warrants the proposed change.” “Many people may not be aware that under the city’s current regulations, residents cannot light a fire on their own property to create heat outdoors without a permit. However, it is important to note there are exceptions to these rules, which currently allow for outdoor cooking on barbeques and in pizza ovens. “We really value the community’s input and won’t be making a final decision on this until after Kingston residents have had an opportunity to provide us with feedback.” Visit yourkingstonyoursay.com.au to provide feedback. Mail feedback to PO Box 1000, Mentone 3194. Consultation closes Friday, 18 December.

THE Victorian Ombudsman is investigating what all local councils are doing to help residents financially struggling during the COVID-19 pandemic. The investigation is expected to be completed in the first half of next year. The ombudsman will look into whether information about councils’ financial hardship assistance is accessible for ratepayers, and if it is fair and reasonable. Victorian Ombudsman Deborah Glass said “As we know too well, the COVID-19 pandemic and economic downturn will see a growing number of people experiencing financial hardship.” “Before the pandemic, my office regularly received complaints from ratepayers about the way councils responded when they could not pay their rates,” she said. “Financial counselling and community legal groups also raised concerns. “I am aware that many councils are providing special assistance and relief for ratepayers during the pandemic. However, it is increasingly clear these problems will endure into the future. “I believe it is important to look at how councils in different parts of Victoria respond to hardship, to identify good practice that can be shared across the sector.” Struggling ratepayers whose issues cannot be resolved through council can contact the Victorian Ombudsman for advice on (03) 9613 6222 from 10am - 4pm, Monday - Friday, or online at www.ombudsman.vic.gov. au/complaints