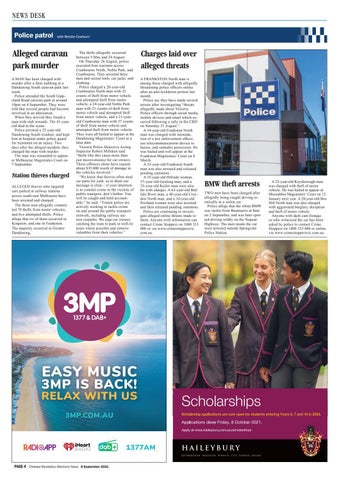 Alleged caravan park murder A MAN has been charged with murder after a fatal stabbing at a Dandenong South caravan park last week. Police attended the South Gippsland Road caravan park at around 10pm on 4 September. They were told that several people had become involved in an altercation. When they arrived they found a man with stab wounds. The 41-yearold died at the scene. Police arrested a 25-year-old Dandenong South resident, and kept him at hospital under police guard for treatment on an injury. Two days after the alleged incident, they charged the man with murder. The man was remanded to appear at Melbourne Magistrates Court on 7 September.

Station thieves charged ALLEGED thieves who targeted cars parked at railway stations across south-east Melbourne have been arrested and charged. The three men allegedly committed 70 thefts from motor vehicles, and five attempted thefts. Police allege that six of them occurred in Kingston, and one in Frankston. The majority occurred in Greater Dandenong.

Charges laid over alleged threats A FRANKSTON North man is among those charged with allegedly threatening police officers online after an anti-lockdown protest last month. Police say they have made several arrests after investigating “threats allegedly made about Victoria Police officers through social media, mobile devices and email which occurred following a rally in the CBD on Saturday 21 August.” A 34-year-old Frankston North man was charged with intimidation of a law enforcement officer, use telecommunications device to harass, and cannabis possession. He was bailed and will appear at the Frankston Magistrates’ Court on 8 March. A 33-year-old Frankston South man was also arrested and released pending summons. A 35-year-old Hillside woman, 37-year-old Geelong man, and a 33-year-old Keilor man were also hit with charges. A 63-year-old Buffalo River man, a 40-year-old Croydon North man, and a 34-year-old Portland woman were also arrested and then released pending summons. Police are continuing to investigate alleged online threats made to them. Anyone with information can contact Crime Stoppers on 1800 333 000 or via www.crimestoppersvic. com.au.

BMW theft arrests TWO men have been charged after allegedly being caught driving erratically in a stolen car. Police allege that the white BMW was stolen from Beamauris at 8am on 2 September, and was later spotted driving wildly on the Nepean Highway. The men inside the car were arrested outside Springvale Police Station.

A 22-year-old Keysborough man was charged with theft of motor vehicle. He was bailed to appear at Moorabbin Magistrates’ Court on 12 January next year. A 20-year-old Box Hill North man was also charged with aggravated burglary, deception and theft of motor vehicle. Anyone with dash cam footage or who witnessed the car has been asked by police to contact Crime Stoppers on 1800 333 000 or online via www.crimestoppersvic.com.au.