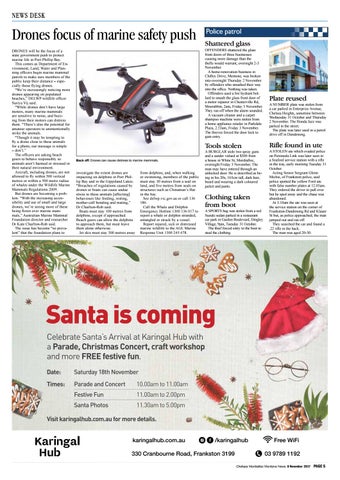 Drones focus of marine safety push DRONES will be the focus of a state government push to protect marine life in Port Phillip Bay. This comes as Department of Environment, Land, Water and Planning officers begin marine mammal patrols to make sure members of the public keep their distance – especially those flying drones. “We’re increasingly noticing more drones appearing on populated beaches,” DELWP wildlife officer Suriya Vij said. “While drones don’t have large motors, many marine mammals are sensitive to noise, and buzzing from their motors can distress them. “There’s also the potential for amateur operators to unintentionally strike the animals. “Though it may be tempting to fly a drone close to these animals for a photo, our message is simple – don’t.” The officers are asking beach goers to behave responsibly so animals aren’t harmed or stressed in their natural environment. Aircraft, including drones, are not allowed to fly within 500 vertical metres or within a 500 metre radius of whales under the Wildlife Marine Mammals Regulations 2009. But drones are becoming a problem. “With the increasing accessibility and use of small and large drones, we’re seeing more of these being flown over marine mammals,” Australian Marine Mammal Foundation director and researcher Dr Kate Charlton-Rob said. The issue has become “so prevalent” that the foundation plans to

Police patrol Shattered glass OFFENDERS shattered the glass front doors of three businesses causing more damage than the thefts would warrant, overnight 2-3 November. A home-renovation business in Chifley Drive, Mentone, was broken into overnight Thursday 2 November by offenders who smashed their way into the office. Nothing was taken. Offenders used a fire hydrant bollard to smash the glass front door of a motor repairer in Chesterville Rd, Moorabbin, 2am, Friday 3 November. They ran off when the alarm sounded. A vacuum cleaner and a carpet shampoo machine were stolen from a home appliance retailer in Parkdale Plaza, 2.53am, Friday 3 November. The thieves forced the door lock to gain entry.

Tools stolen Back off: Drones can cause distress to marine mammals.

investigate the extent drones are impacting on dolphins in Port Phillip Bay and in the Gippsland Lakes. “Breaches of regulations caused by drones or boats can cause undue stress to these animals [affecting] behaviours like feeding, resting, mother-calf bonding and mating,” Dr Charlton-Rob said. Boats must stay 100 metres from dolphins, except if approached. Beach goers can allow the dolphins to approach them, but must leave them alone otherwise. Jet skis must stay 300 metres away

from dolphins, and, when walking or swimming, members of the public must stay 30 metres from a seal on land, and five metres from seals on structures such as Chinaman’s Hat in the bay. See delwp.vic.gov.au or call 136 186. Call the Whale and Dolphin Emergency Hotline 1300 136 017 to report a whale or dolphin stranded, entangled or struck by a vessel. Report injured, sick or distressed marine wildlife to the AGL Marine Response Unit 1300 245 678.

A BURGLAR stole two spray guns and a sander valued at $300 from a house in White St, Mordialloc, overnight Friday 3 November. The man may have entered through an unlocked door. He is described as being in his 20s, 165cm tall, dark hair, beard and wearing a dark coloured jacket and pants.

A SPORTS bag was stolen from a red Suzuki sedan parked in a restaurant car park in Garden Boulevard, Dingley Village, 9pm, Tuesday 31 October. The thief forced entry to the boot to steal the clothing.

A NUMBER plate was stolen from a car parked in Enterprize Avenue, Chelsea Heights, sometime between Wednesday 31 October and Thursday 2 November. The Honda Jazz was parked in the street. The plate was later used in a petrol drive off in Dandenong.

A STOLEN ute which evaded police on Peninsula Link was later seen in a Seaford service station with a rifle in the tray, early morning Tuesday 31 October. Acting Senior Sergeant Glenn Michie, of Frankston police, said police spotted the yellow Ford ute with false number plates at 12.05am. They ordered the driver to pull over but he sped away and the chase was abandoned. At 3.10am the ute was seen at the service station on the corner of Frankston-Dandenong Rd and Klauer St but, as police approached, the man jumped out and ran off. They searched the car and found a .22 rifle in the back. The man was aged 20-30.