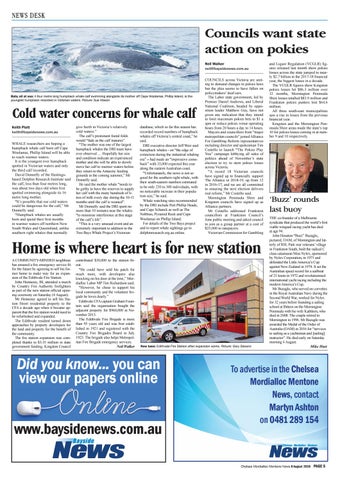 Cold water concerns for whale calf Keith Platt keith@baysidenews.com.au WHALE researchers are hoping a humpback whale calf born off Cape Woolamai, Phillip Island will be able to reach warmer waters. It is the youngest ever humpback spotted in Victorian waters and only the third calf recorded. David Donnelly of the Hastingsbased Dolphin Research Institute said the calf, less than four metres long, was about two days old when first spotted swimming alongside its 16 metre long mother. “It’s possible that our cold waters could be dangerous for the calf,” Mr Donnelly said. “Humpback whales are usually born and spend their first months in warmer waters off northern New South Wales and Queensland, unlike southern right whales that normally

give berth in Victoria’s relatively cold waters.” The calf’s prominent foetal folds would “fade as the calf matures”. “The mother was one of the largest humpback whales the DRI team have ever observed … Hopefully her size and condition indicate an experienced mother and she will be able to slowly move her calf to warmer waters before they return to the Antarctic feeding grounds in the coming summer,” Mr Donnelly said. He said the mother whale “needs to be girthy to have the reserves to supply her calf with the many hundreds of litres of milk every day during the 10-11 months until the calf is weaned”. Mr Donnelly said the DRI spent no more than 10 minutes near the whales “to minimise interference at this stage of the calf’s life”. “This is a very unusual event and an extremely important to addition to the Two Bays Whale Project’s Victorian

database, which so far this season has recorded record numbers of humpback whales off Victoria’s central coast,” he said. DRI executive director Jeff Weir said humpback whales - on “the edge of extinction during the industrial whaling era” – had made an “impressive comeback” with 33,000 expected this year along the eastern Australian coast. “Unfortunately, the news is not so good for the southern right whale, with their south-eastern numbers estimated to be only 250 to 300 individuals, with no noticeable increase in their population size,” he said. Whale watching sites recommended by the DRI include Port Phillip Heads, and Cape Schanck as well as The Nobbies, Pyramid Rock and Cape Woolamai on Phillip Island. For details of the Two Bays project and to report whale sightings go to dolphinresearch.org.au online.

COUNCILS across Victoria are uniting to demand changes to pokies laws but the plea seems to have fallen on policymakers’ deaf ears. The Labor state government, led by Premier Daniel Andrews, and Liberal National Coalition, headed by opposition leader Matthew Guy, have not given any indication that they intend to limit maximum pokies bets to $1 a spin or reduce pokies venue operating hours from 20 hours a day to 14 hours. Mayors and councillors from “major metropolitan councils” joined Alliance For Gambling Reform representatives including director and spokesman Tim Costello to launch “The Pokies Play You” campaign lobbying all sides of politics ahead of November’s state election to try to stem pokies losses across Victoria. “A record 18 Victorian councils have signed up to financially support The Alliance in 2018-19, up from 12 in 2016-17, and we are all committed to ensuring the next election delivers real reform,” Mr Costello said. Mornington Peninsula Shire and Kingston councils have signed up as Alliance partners. Mr Costello addressed Frankston councillors at Frankston Council’s June public meeting and asked council to join as a group partner at a cost of $25,000 to ratepayers. Victorian Commission for Gambling

Home is where heart is for new station A COMMUNITY-MINDED neighbour has ensured a fire emergency service fit for the future by agreeing to sell his former home to make way for an expansion of the Edithvale Fire Station. John Hennessy, 88, attended a march by Country Fire Authority firefighters as part of the new station official opening ceremony on Saturday (4 August). Mr Hennessy agreed to sell his Station Street residential property to the CFA a decade ago when it became apparent that the fire station would need to be refurbished and expanded. The Edithvale resident turned down approaches by property developers for the land and property for the benefit of the community. The fire station expansion was completed thanks to $3.35 million in state government funding. Kingston Council

contributed $30,000 to the station fitout. “He could have sold his patch for much more, with developers also knocking on his door at the time,” Mordialloc Labor MP Tim Richardson said. “However, he chose to support his local community and the volunteer brigade he loves dearly.” Edithvale CFA captain Graham Fountain said the organisation bought the adjacent property for $960,000 in November 2013. The Edithvale Fire Brigade is more than 95 years old and was first established in 1921 and registered with the Country Fire Brigades Board in July 1925. The brigade also helps Metropolitan Fire Brigade emergency services. Neil Walker

Did you know... you can view our papers online www.baysidenews.com.au Bayside

‘Buzz’ rounds last buoy THE co-founder of a Melbourne syndicate that produced the world’s first viable wingsail racing yacht has died at age 94. John Houston “Buzz” Buzaglo, pictured, OAM, of Mornington and latterly of RSL Park war veterans’ village in Frankston South, built the radical C class catamaran Miss Nylex, sponsored by Nylex Corporation, in 1971 and defended the Little America’s Cup against New Zealand in 1974. It set the Australian speed record for a sailboat of 21 knots in 1972 and revolutionised international yacht racing including the modern America’s Cup. Mr Buzaglo, who served on corvettes in the Royal Australian Navy during the Second World War, worked for Nylex for 32 years before founding a sailing school at Bittern on the Mornington Peninsula with his wife Kathleen, who died in 2008. The couple retired to Mornington in 1996. Mr Buzaglo was awarded the Medal of the Order of Australia (OAM) in 2016 for “services to sailing as a yachtsman and [sailing] instructor”. He died early on Saturday morning 4 August. Mike Hast