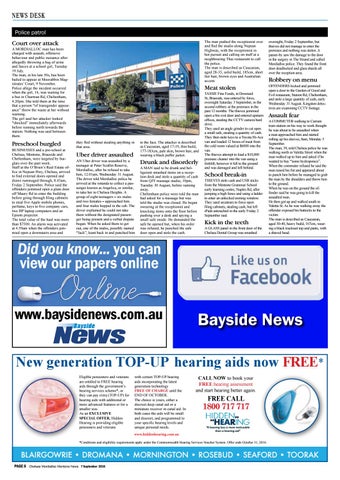 A MORDIALLOC man has been charged with assault, offensive behaviour and public nuisance after allegedly throwing a bag of urine and faeces at a school girl, Tuesday 19 July. The man, in his late 50s, has been bailed to appear at Moorabbin Magistrates’ Court, 9 November. Police allege the incident occurred when the girl, 14, was waiting for a bus in Charman Rd, Cheltenham, 4.20pm. She told them at the time that a person “of transgender appearance” threw the waste at her without warning. The girl said her attacker looked “shocked” immediately afterwards before running north towards the station. Nothing was said between them.

Preschool burgled BUSINESSES and a pre-school at Chelsea, Mentone, Braeside and Cheltenham, were targeted by burglars over the past week. Staff at the O’Brien’s Real Estate office in Nepean Hwy, Chelsea, arrived to find external doors opened and draws rummaged through, 8.45am, Friday 2 September. Police said the offenders jemmied open a glass door off Maury Rd to enter the building before going through filing cabinets to steal five Apple mobile phones, perfume, keys to five company cars, two HP laptop computers and an Epsom projector. The total value of the haul was more than $7500. An alarm was activated at 4.59am when the offenders jemmied open a downstairs area and

they fled without stealing anything in that area.

AN Uber driver was assaulted by a teenager at Peter Scullin Reserve, Mordialloc, after he refused to take him, 12.01am, Wednesday 31 August. The driver told Mordialloc police he arrived at the rotunda to collect a passenger known as Angelica, or similar, to take her to Chelsea Heights. A group of eight teenagers – six males and two females – approached him and four males hopped in the cab. The driver explained he could not take them without the designated passenger being present and a verbal dispute began. When he asked them to get out, one of the males, possibly named “Jack”, leant back in and punched him

to the face. The attacker is described as Caucasian, aged 17-19, thin build, 177-183cm, pale skin, brown hair, and wearing a black puffer jacket.

A MAN said to be drunk and belligerent smashed items on a reception desk and stole a quantity of cash from QJY massage studio, 10pm, Tuesday 30 August, before running away. Cheltenham police were told the man had asked for a massage but was told the studio was closed. He began swearing at the receptionist and knocking items onto the floor before pushing over a desk and spying a small safe inside. He demanded the safe be opened but, when his order was refused, he punched the safe door open and stole the cash.

The man pushed the receptionist over and fled the studio along Nepean Highway, with the receptionist in hot pursuit and calling on staff at a neighbouring Thai restaurant to call the police. The man is described as Caucasian, aged 28-35, solid build, 185cm, short fair hair, brown eyes and Australian accent.

overnight, Friday 2 September, but thieves did not manage to enter the premises and nothing was stolen. A passer-by saw the damage to the door in the surgery in The Strand and called Mordialloc police. They found the front door deadlocked and glass shards all over the reception area.

TASSIE Fine Foods, in Downard St, Braeside, was entered by force, overnight Saturday 3 September, in the second robbery at the premises in the past 12 months. The thieves jemmied open a fire exit door and entered upstairs offices, stealing the CCTV camera hard drive. They used an angle grinder to cut open a small safe, stealing a quantity of cash. They then stole keys to a Toyota Hi-Ace van and loaded 12 boxes of meat from the cold room valued at $6000 into the van. The thieves attempt to load a $10,000 pressure cleaner into the van using a forklift, however it fell to the ground and was damaged and left behind.

Kick in the teeth

A COMMUTER walking to Carrum train station on his way to work thought he was about to be assaulted when a man approached him and started rolling up his sleeves, 8am, Monday 5 September. The man, 39, told Chelsea police he was walking north in Valetta Street when the man walked up to him and asked if he wanted to buy “some hydroponics”. When the commuter refused he said the man raised his fist and appeared about to punch him before he managed to grab the man by the shoulders and throw him to the ground. When he was on the ground the offender said he was going to kill the assualted man. He then got up and walked south in Valetta St. As he was walking away the offender exposed his buttocks to the victim. The man is described as Caucasian, aged 30-40, heavy build, 167cm, wearing a black tracksuit top and pants, with a shaved head.

Did you know... you can view our papers online www.baysidenews.com.au Bayside

with certain TOP-UP hearing aids incorporating the latest generation technology FREE OF CHARGE until the END OF OCTOBER. The choice is yours, either a discreet deep canal aid or a miniature receiver in canal aid. In both cases the aids will be small and discreet, and programmed to your specific hearing levels and unique personal needs. www.hiddenhearing.com.au