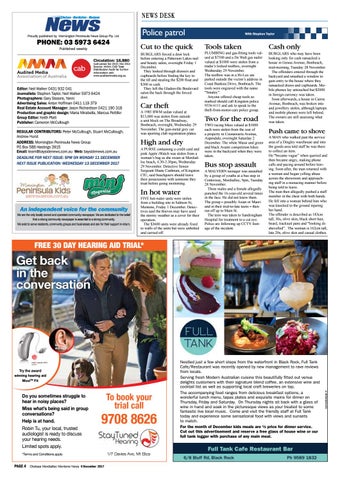 Police patrol Cut to the quick BURGLARS forced a door lock before entering a Patterson Lakes nail and beauty salon, overnight Friday 1 December. They looked through drawers and cupboards before finding the key to the till and stealing the $200 float and $300 in cash. They left the Gladesville Boulevard salon the back through the forced door.

A 1985 BWM sedan valued at $15,000 was stolen from outside a unit block on The Broadway, Bonbeach, overnight, Wednesday 29 November. The gun-metal grey car was sporting club registration plates.

High and dry A PURSE containing a credit card and pink Apple iWatch was stolen from a woman’s bag as she swam at Mordialloc beach, 4.30-5.30pm, Wednesday 29 November. Detective Senior Sergeant Shane Cashman, of Kingston CIU, said beachgoers should leave their possessions with someone they trust before going swimming.

In hot water An independent voice for the community

FIVE hot-water units were stolen from a building site in Salmon St, Mentone, Friday 1 December. Detectives said the thieves may have used the stormy weather as a cover for their operation. The $3600 units were already fixed to walls of the units but were unbolted and carried off.

Two for the road

BURGLARS who may have been looking only for cash ransacked a house in Genoa Avenue, Bonbeach, mid-morning, Tuesday 28 November. The offenders entered through the backyard and smashed a window to gain entry to the house where they ransacked draws and cupboards. Mobile phones lay untouched but $2000 in foreign currency was taken. Soon afterwards, a house in Cairns Avenue, Bonbeach, was broken into and jewellery stolen, although laptops and mobile phones were left behind. The owners are still assessing what was taken.

PLUMBING and gas-fitting tools valued at $7500 and a De Walt gas nailer valued at $1000 were stolen from a tradie’s locked toolbox, overnight Wednesday 29 November. The toolbox was in a Hi-Lux ute parked outside the victim’s address in Coast Banksia Drive, Bonbeach. The tools were engraved with the name “Smaley”. Anyone offered cheap tools so marked should call Kingston police 9556 6111 and ask to speak to the theft-from-motor-cars police group.

TWO racing bikes valued at $1000 each were stolen from the rear of a property in Coonawarra Avenue, Aspendale, overnight Saturday 2 December. The white Massi and green and black Avanti competition bikes were in the backyard when they were taken.

A MALVERN teenager was assaulted by a group of youths at a bus stop in Centreway, Mordialloc, 9pm, Tuesday 28 November. Three males and a female allegedly punched the 16-year-old several times in the face. He did not know them. The group – possibly Asian or Maori and in their mid-to-late teens – then ran off up to Main St. The teen was taken to Sandringham Hospital for treatment to a cut eye. Police are following up CCTV footage of the incident.

A MAN who walked past the service area of a Dingley warehouse and into the goods area told staff he was there to collect an item. He “became vague” when queried and then became angry, making phone calls and pacing around before leaving. Soon after, the man returned with a woman and began yelling abuse across the showroom and approaching staff in a menacing manner before being told to leave. The man then allegedly pushed a staff member in the chest with both hands. He fell into a woman behind him who was knocked to the ground injuring her hand. The offender is described as 183cm tall, 30s, olive skin, black short hair, beard, tracksuit pans and “looking dishevelled”. The woman is 162cm tall, late 20s, olive skin and casual clothes.

Get back in the conversation

Do you sometimes struggle to hear in noisy places? Miss what’s being said in group conversations? Help is at hand. Robin Tu, your local, trusted audiologist is ready to discuss your hearing needs. Limited spots apply.

Nestled just a few short steps from the waterfront in Black Rock, Full Tank Cafe/Restaurant was recently opened by new management to rave reviews from locals. Serving fresh Modern Australian cuisine this beautifully fitted out venue delights customers with their signature blend coffee, an extensive wine and cocktail list as well as supporting local craft breweries on tap. The accompanying food ranges from delicious breakfast options, a wonderful lunch menu, tapas plates and exquisite mains for dinner on Thursday, Friday and Saturday. On Thursday nights sit back with a glass of wine in hand and soak in the picturesque views as your treated to some fantastic live local music. Come and visit the friendly staff at Full Tank today and experience some sensational food with views and sunsets to match. For the month of December kids meals are ½ price for dinner service. Cut out this advertisement and reserve a free glass of house wine or our full tank logger with purchase of any main meal.