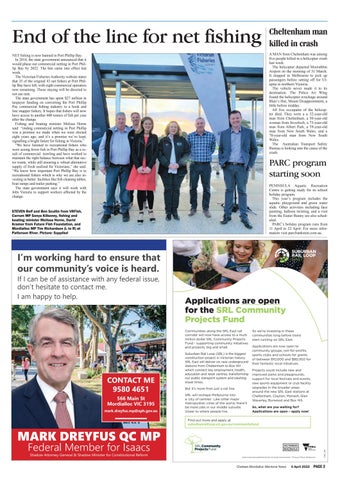 End of the line for net fishing

NET fishing is now banned in Port Phillip Bay. In 2014, the state government announced that it would phase out commercial netting in Port Phillip Bay by 2022. The ban came into effect last week. The Victorian Fisheries Authority website states that 35 of the original 43 net fishers at Port Phillip Bay have left, with eight commercial operators now remaining. Those staying will be directed to not use nets. The state government has spent $27 million in taxpayer funding on converting the Port Phillip Pay commercial fishing industry to a hook and line snapper fishery. It hopes that fishers will now have access to another 600 tonnes of fish per year after the change. Fishing and boating minister Melissa Horne said “ending commercial netting in Port Phillip was a promise we made when we were elected eight years ago, and it’s a promise we’ve kept, signalling a bright future for fishing in Victoria.” “We have listened to recreational fishers who were seeing fewer fish in Port Phillip Bay as a result of commercial trawling and have worked to maintain the right balance between what that sector wants, while still ensuring a robust alternative supply of fresh seafood for Victorians,” she said. “We know how important Port Phillip Bay is to recreational fishers which is why we are also investing in better facilities like fish cleaning tables, boat ramps and trailer parking.” The state government says it will work with Jobs Victoria to support workers affected by the change.

I’m working hard to ensure that our community’s voice is heard. If I can be of assistance with any federal issue, don’t hesitate to contact me. I am happy to help.

Applications are open for the SRL Community Projects Fund Communities along the SRL East rail corridor will now have access to a multi million dollar SRL Community Projects Fund - supporting community initiatives and projects, big and small. Suburban Rail Loop (SRL) is the biggest construction project in Victorian history. SRL East will deliver six new underground stations from Cheltenham to Box Hill which connect key employment, health, education and retail centres, transforming our public transport system and slashing travel times. But it’s more than just a rail line. SRL will reshape Melbourne into a ‘city of centres’. Like other major metropolitan cities of the world, there’ll be more jobs in our middle suburbs closer to where people live.

So we’re investing in these communities long before trains start running on SRL East. Applications are now open to community groups, not-for-profits, sports clubs and schools for grants of between $10,000 and $80,000 for their fantastic local initiatives. Projects could include new and improved parks and playgrounds, support for local festivals and events, new sports equipment or club facility upgrades in the broader areas around the new SRL East stations at Cheltenham, Clayton, Monash, Glen Waverley, Burwood and Box Hill. So, what are you waiting for? Applications are open – apply now!

Find out more and apply at suburbanrailloop.vic.gov.au/communityfund

Authorised and published by the Victorian Government, 1 Treasury Place, Melbourne.