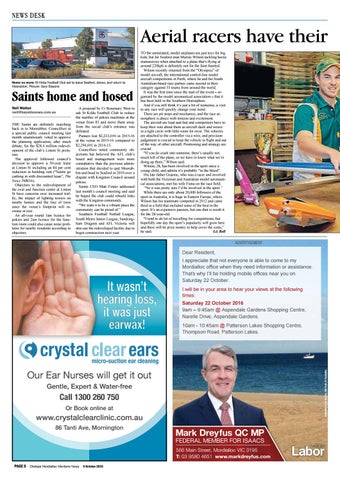 Aerial racers have their Home no more: St Kilda Football Club set to leave Seaford, above, and return to Moorabbin. Picture: Gary Sissons

Saints home and hosed Neil Walker neil@baysidenews.com.au THE Saints are definitely marching back in to Moorabbin. Councillors at a special public council meeting last month unanimously voted to approve the planning application, after much debate, for the $28.4 million redevelopment of the club’s Linton St premises. The approval followed council’s decision to approve a 50-year lease at Linton St including an 84 per cent reduction in building rent (“Saints go cashing in with discounted lease”, The News 29/8/16). Objectors to the redevelopment of the oval and function centre at Linton St have concerns over increased traffic, the impact of lighting towers on nearby homes and the loss of trees since the venue’s footprint will increase in size. An all-year round 1am licence for pokies and 2am licence for the function room could also cause noise problems for nearby residents according to objectors.

A proposal by Cr Rosemary West to ask St Kilda Football Club to reduce the number of pokies machines at the venue from 83 and move them away from the social club’s entrance was defeated. Punters lost $2,223,654 in 2015-16 at the venue in 2015-16 compared to $2,294,691 in 2014-15. Councillors noted community objections but believed the AFL club’s board and management were more consultative than the previous administration that decided to quit Moorabbin and head to Seaford in 2010 over a dispute with Kingston Council around pokies. Saints CEO Matt Finnis addressed last month’s council meeting and said he hoped the club could rebuild links with the Kingston community. “We want it to be a vibrant place the community can be proud of.” Southern Football Netball League, South Metro Junior League, Sandringham Dragons and AFL Victoria will also use the redeveloped facility due to begin construction next year.

TO the uninitiated, model airplanes are just toys for big kids, but for Seaford man Murray Wilson tackling hectic manoeuvres when attached to a plane that’s flying at around 220kph is definitely not for the faint hearted. Wilson recently returned from the “Olympics” of model aircraft, the international control-line model aircraft competitions in Perth, where he and his South Australian-based race partner came second in their category against 35 teams from around the world. It was the first time since the start of the event – organised by the model aeronautical association – that it has been held in the Southern Hemisphere. And if you still think it’s just a bit of nonsense, a visit to any race will quickly change your mind. There are pit stops and mechanics, and the race atmosphere is abuzz with tension and excitement. The aircraft are loud and fast and competitors have to keep their wits about them as aircraft duck and weave in a tight circle with little room for error. The vehicles are attached to the controller via a wire, and precision judgement is crucial to keep the vehicle in flight and out of the way of other aircraft. Positioning and strategy are crucial. “If you do crash into someone, there’s usually not much left of the plane, so we have to know what we’re doing up there,” Wilson said. Wilson, 28, has been involved in the sport since a young child, and admits it’s probably “in the blood”. His late father Graeme, who was a racer and involved with both the Victorian and Australian model aeronautical associations, met his wife Fiona on the race field. “So it was pretty sure I’d be involved in the sport.” While there are only about 20,000 followers of the sport in Australia, it is huge in Eastern Europe, where Wilson has his teammate competed in 2012 and came third in a field that included some of the best in the sport. It’s an expensive passion, but one that is worth it for the 28-year-old. “I tend to do lot of travelling for competitions, but hopefully one day the sport’s popularity will grow here and there will be prize money to help cover the costs,” he said. Liz Bell

It wasn’t hearing loss, it was just earwax!

I appreciate that not everyone is able to come to my Mordialloc office when they need information or assistance. That’s why I’ll be holding mobile offices near you on Saturday 22 October. I will be in your area to hear your views at the following times: Saturday 22 October 2016 9am – 9:45am @ Aspendale Gardens Shopping Centre, Narelle Drive, Aspendale Gardens. 10am - 10:45am @ Patterson Lakes Shopping Centre, Thompson Road, Patterson Lakes.

Our Ear Nurses will get it out Gentle, Expert &amp; Water-free