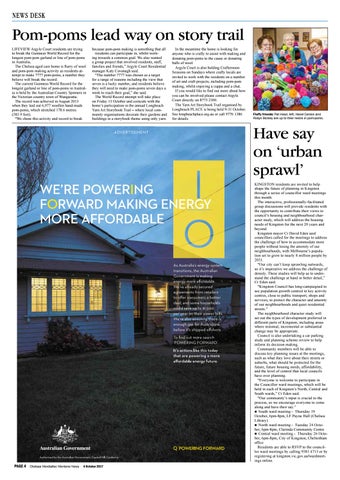 Pom-poms lead way on story trail LIFEVIEW Argyle Court residents are trying to break the Guinness World Record for the longest pom-pom garland or line of pom-poms in Australia. The Chelsea aged care home is flurry of wool and pom-pom making activity as residents attempt to make 7777 pom-poms, a number they believe will break the record. The current Guinness World Record for the longest garland or line of pom-poms in Australia is held by the Australian Country Spinners in the Victorian country town of Wangaratta. The record was achieved in August 2013 when they laid out 6,977 woollen hand-made pom-poms, which stretched 178.6 metres (585.9 feet). “We chose this activity and record to break

because pom-pom making is something that all residents can participate in, whilst working towards a common goal. We also wanted a group project that involved residents, staff, families and friends,” Argyle Court Residential manager Katy Cavanagh said. “The number 7777 was chosen as a target for a range of reasons including the view that seven is a lucky number, and residents believe they will need to make pom-poms seven days a week to reach their goal,” she said. The World Record attempt will take place on Friday 13 October and coincide with the home’s participation in the annual Longbeach Yarn Art Storybook Trail – where local community organisations decorate their gardens and buildings in a storybook theme using only yarn.

In the meantime the home is looking for anyone who is crafty to assist with making and donating pom-poms to the cause or donating balls of wool. Argyle Court is also holding Crafternoon Sessions on Sundays where crafty locals are invited to work with the residents on a number of art and craft projects, including pom-pom making, whilst enjoying a cuppa and a chat. If you would like to find out more about how you can be involved please contact Argyle Court directly on 8773 2300. The Yarn Art Storybook Trail organised by Longbeach PLACE is being held 9-31 October. See longbeachplace.org.au or call 9776 1386 for details.

Fluffy friends: Pat Hood, left, Hazel Cordon and Robyn Bickley are up to their necks in pom-poms.

Have say on ‘urban sprawl’ KINGSTON residents are invited to help shape the future of planning in Kingston through a series of councillor ward meetings this month. The interactive, professionally-facilitated group discussions will provide residents with the opportunity to contribute their views to council’s housing and neighbourhood character study, which will address the housing needs of Kingston for the next 20 years and beyond. Kingston mayor Cr David Eden said councillors called for the meetings to address the challenge of how to accommodate more people without losing the amenity of our neighbourhoods, with Melbourne’s population set to grow to nearly 8 million people by 2051. “Our city can’t keep sprawling outwards, so it’s imperative we address the challenge of density. These studies will help us to understand the challenge at hand in better detail,” Cr Eden said. “Kingston Council has long-campaigned to see population growth centred in key activity centres, close to public transport, shops and services, to protect the character and amenity of our neighbourhoods and quiet residential streets.” The neighbourhood character study will set out the types of development preferred in different parts of Kingston, including areas where minimal, incremental or substantial change may be appropriate. Council is also undertaking a car parking study and planning scheme review to help inform its decision making. Community members will be able to discuss key planning issues at the meetings, such as what they love about their streets or suburbs, what should be protected for the future, future housing needs, affordability, and the level of control that local councils have over planning. “Everyone is welcome to participate in the Councillor ward meetings, which will be held in each of Kingston’s North, Central and South wards,” Cr Eden said. “Our community’s input is crucial to the process, so we encourage everyone to come along and have their say.” n South ward meeting - Thursday 19 October, 6pm-8pm, LF Payne Hall (Chelsea Library) n North ward meeting - Tuesday 24 October, 6pm-8pm, Clarinda Community Centre n Central ward meeting - Thursday 26 October, 6pm-8pm, City of Kingston, Cheltenham office Residents are able to RSVP to the councillor ward meetings by calling 9581 4713 or by registering at kingston.vic.gov.au/wardmeetings online.