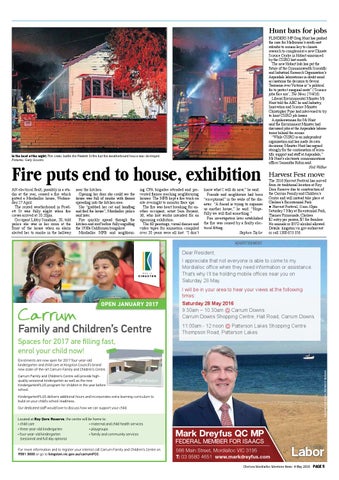 In the heat of the night: Fire crews battle the Powlett St fire but the weatherboard house was destroyed. Pictures: Gary Sissons

Fire puts end to house, exhibition AN electrical fault, possibly in a studio at the rear, caused a fire which gutted a Mordialloc house, Wednesday 27 April. The rented weatherboard in Powlett St was fully alight when fire crews arrived at 10.20pm. Occupant Libby Sunshine, 20, told police she was in her room at the front of the house when an alarm alerted her to smoke in the hallway

near the kitchen. Opening her door she could see the house was full of smoke with flames spreading into the kitchen area. She “grabbed her cat and handbag and fled the house”, Mordialloc police said later. Fire quickly spread through the kitchen and roof before fully engulfing the 1930s Californian bungalow. Mordialloc MFB and neighbour-

ing CFA brigades attended and prevented flames reaching neighbouring houses. The MFB kept a fire truck on site overnight to monitor flare ups. The fire was heart breaking for another occupant, artist Sam Boyant, 36, who lost works intended for an upcoming exhibition. The 60 paintings, visual diaries and video tapes for animation compiled over 20 years were all lost. “I don’t

know what I will do now,” he said. Friends and neighbours had been “exceptional” in the wake of the disaster: “A friend is trying to organise us another house,” he said. “Hopefully we will find something.” Fire investigators later established the fire was caused by a faulty electrical fitting. Stephen Taylor

FLINDERS MP Greg Hunt has pushed the case for Melbourne’s south east suburbs to remain key to climate research to complement a new Climate Science Centre in Hobart announced by the CSIRO last month. The new Hobart hub has put the future of the Commonwealth Scientific and Industrial Research Organisation’s Aspendale laboratories in doubt amid accusations the decision to favour Tasmania over Victoria is “a political fix to protect marginal seats” (‘Science jobs face axe’, The News 27/4/16). Liberal Environmental Minister Mr Hunt told the ABC he and Industry, Innovation and Science Minister Christopher Pyne had intervened to try to limit CSIRO job losses. A spokeswoman for Mr Hunt said the Environment Minister had discussed jobs at the Aspendale laboratories behind the scenes. “While CSIRO is an independent organisation and has made its own decisions, Minister Hunt has argued strongly for the continuation of scientific support and staff at Aspendale,” Mr Hunt’s electorate communications officer Samantha Robin said. Neil Walker

The 2016 Harvest Festival has moved from its traditional location at Roy Dore Reserve due to construction of the Carrum Family and Children’s Centre and will instead take place at Chelsea’s Bicentennial Park. n Harvest Festival, 11am-10pm Saturday 7 May at Bicentennial Park, Thames Promenade, Chelsea. $2 entry per person, $5 for families. No animals or BYO alcohol allowed. Details: kingston.vic.gov.au/harvest or call 1300 653 356.

Dear Resident, I appreciate that not everyone is able to come to my Mordialloc office when they need information or assistance. That’s why I’ll be holding mobile offices near you on Saturday 28 May. I will be in your area to hear your views at the following times:

Spaces for 2017 are filling fast, enrol your child now! Carrum Family and Children’s Centre will provide highquality sessional kindergarten as well as the new KindergartenPLUS program for children in the year before school.

KindergartenPLUS delivers additional hours and incorporates extra learning curriculum to build on your child’s school readiness. Our dedicated staff would love to discuss how we can support your child. Located at Roy Dore Reserve, the centre will be home to: • maternal and child health services • child care • playgroups • three-year-old kindergarten • family and community services • four-year-old kindergarten (sessional and full day options) For more information and to register your interest call Carrum Family and Children’s Centre on 9581 3000 or go to kingston.vic.gov.au/carrumFCC