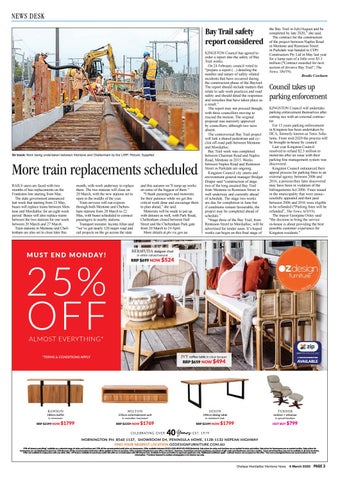 On track: Work being undertaken between Mentone and Cheltenham by the LXRP. Picture: Supplied

More train replacements scheduled RAILS users are faced with two months of bus replacements on the Frankston line starting from May. The state government announced last week that starting from 23 May, buses will replace trains between Mentone and Mordialloc for an eight week period. Buses will also replace trains between the two stations for one week between 20 March and 27 March. Train stations in Mentone and Cheltenham are also set to close later this

and this autumn we’ll ramp up works on some of the biggest of them.” “I thank passengers and motorists for their patience while we get this critical work done and encourage them to plan ahead,” she said. Motorists will be made to put up with detours as well, with Park Road, Cheltenham closed between Hall Street and the Cheltenham Park gate from 20 March to 24 April. More details at ptv.vic.gov.au

month, with work underway to replace them. The two stations will close on 20 March, with the new stations set to open in the middle of the year. Train services will run express through both Mentone and Cheltenham stations from 28 March to 22 May, with buses scheduled to connect passengers to nearby stations. Transport minister Jacinta Allan said “we’ve got nearly 120 major road and rail projects on the go across the state

KINGSTON Council has agreed to order a report into the safety of Bay Trail works. On 24 February council voted to “prepare a report (...) detailing the number and nature of safety related incidents that have occurred during the construction phase of the Baytrail. The report should include matters that relate to safe work practices and road safety and should detail the responses and remedies that have taken place as a result.” The report may not proceed though, with three councillors moving to rescind the motion. The original proposal was narrowly approved by councillors, although two were absent. The controversial Bay Trail project will link a shared pedestrian and cyclist off-road path between Mentone and Mordialloc. Bay Trail work was completed between Charman Road and Naples Road, Mentone in 2015. Works between Naples Road and Rennison Street in Parkdale are ongoing. Kingston Council city assets and environment general manager Bridget Draper said “construction of stage two of the long awaited Bay Trail from Mentone to Rennison Street is well underway and currently ahead of schedule. The stage two works are due for completion in June but if conditions remain favourable, the project may be completed ahead of schedule.” “Stage three of the Bay Trail, from Rennison Street to Mordialloc, will be advertised for tender soon. It’s hoped works can begin on this final stage of

the Bay Trail in July/August and be completed by late 2020,” she said. The contract for the construction of the project between Naples Road in Mentone and Rennison Street in Parkdale was handed to CDN Constructors Pty Ltd in May last year for a lump sum of a little over $5.1 million (“Contract awarded for next section of divisive Bay Trail”, The News, 5/6/19). Brodie Cowburn

Council takes up parking enforcement KINGSTON Council will undertake parking enforcement themselves after cutting ties with an external contractor. For 15 years parking enforcement in Kingston has been undertaken by DCA, formerly known as Tenix Solutions. From mid-2020 the process will be brought in-house by council. Last year Kingston Council resolved to refund $2.3 million to motorists after an issue with their parking fine management system was discovered. Kingston Council outsourced their appeal process for parking fines to an external agency between 2006 and 2016, a process they later discovered may have been in violation of the Infringements Act 2006. Fines issued in the municipality that were unsuccessfully appealed and then paid between 2006 and 2016 were eligible to be refunded (“Parking fines will be refunded”, The News, 6/3/19). The mayor Georgina Oxley said “the decision to bring the service in-house is about providing the best possible customer experience for Kingston residents.”

MORNINGTON PH: 8560 1137, SHOWROOM D4, PENINSULA HOME, 1128-1132 NEPEAN HIGHWAY FIND YOUR NEAREST LOCATION OZDESIGNFURNITURE.COM.AU 25% off almost everything* available on a selected range of sofas and furniture and 25% off the recommended retail price on homewares. Offer available between 03-03-2020 till 09-03-2020 (inclusive). Sale prices for sofas and furniture are as marked in-store and online. Sale prices for homewares are as marked on-line. Sales prices for homewares are not displayed in-store but 25% discount off the recommended retail price will be applied at time of purchase. Offer excludes Introductory new offers, Hot Buys*, clearance, Guardsman warranty purchases, purchases of gift cards and Glasshouse and Circa candles. Some advertised lines may not be available at all store locations. Offer not available in conjunction with any other offer. ZIP finance available for purchases under this offer on 6 month plans with 0% interest free. Available in-store and online to approved applicants only. Additional conditions apply*. Latitude finance not accepted on this offer. *See www.ozdesignfurniture.com.au/promotions for more information. *Furniture featured in outdoor photography is for interior use only.