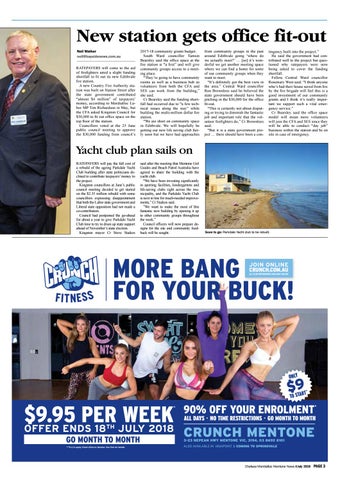 New station gets office fit-out Neil Walker neil@baysidenews.com.au RATEPAYERS will come to the aid of firefighters amid a slight funding shortfall to fit out its new Edithvale fire station. A new Country Fire Authority station was built on Station Street after the state government contributed “almost $4 million” of taxpayers’ money, according to Mordialloc Labor MP Tim Richardson in May, but the CFA asked Kingston Council for $30,000 to fit out office space on the top floor of the station. Councillors voted at the 25 June public council meeting to approve the $30,000 funding from council’s

2017-18 community grants budget. South Ward councillor Tamsin Bearsley said the office space at the fire station is “a first” and will give community groups access to a meeting place. “They’re going to have community rooms as well as a business hub so volunteers from both the CFA and SES can work from the building,” she said. Cr Bearsley said the funding shortfall had occurred due to “a few technical issues along the way” while building the multi-million dollar fire station. “We are short on community space in Edithvale. We will hopefully be getting our new life saving club fairly soon but we have had approaches

from community groups in the past around Edithvale going ‘where do we actually meet?’ … [so] it’s wonderful we get another meeting space where we can find a home for some of our community groups when they want to meet. “It’s definitely got the best view in the area.” Central Ward councillor Ron Brownlees said he believed the state government should have been pitching in the $30,000 for the office fit-out. “This is certainly not about disputing or trying to diminish the fantastic job and important role that the volunteer firefighters do,” Cr Brownlees said. “But it is a state government project … there should have been a con-

tingency built into the project.” He said the government had contributed well to the project but questioned why ratepayers were now being asked to cover the funding shortfall. Fellow Central Ward councillor Rosemary West said: “I think anyone who’s had their house saved from fire by the fire brigade will feel this is a good investment of our community grants and I think it’s really important we support such a vital emergency service.” Cr Bearsley said the office space model will mean more volunteers will join the CFA and SES since they will be able to conduct “day job” business within the station and be on site in case of emergency.

Yacht club plan sails on RATEPAYERS will pay the full cost of a rebuild of the ageing Parkdale Yacht Club building after state politicians declined to contribute taxpayers’ money to the project. Kingston councillors at June’s public council meeting decided to get started on the $2.35 million rebuild with some councillors expressing disappointment that both the Labor state government and Liberal state opposition had not made a co-contribution. Council had postponed the go-ahead for about a year to give Parkdale Yacht Club time to try to drum up state support ahead of November’s state election. Kingston mayor Cr Steve Staikos

said after the meeting that Mentone Girl Guides and Beach Patrol Australia have agreed to share the building with the yacht club. “We have been investing significantly in sporting facilities, kindergartens and life-saving clubs right across the municipality, and the Parkdale Yacht Club is next in line for much-needed improvements,” Cr Staikos said. ”We want to make the most of this fantastic new building by opening it up to other community groups throughout the week.” Council officers will now prepare designs for the site and community feedback will be sought.

Soon to go: Parkdale Yacht club to be rebuilt.

ALL DAYS • NO TIME RESTRICTIONS • GO MONTH TO MONTH