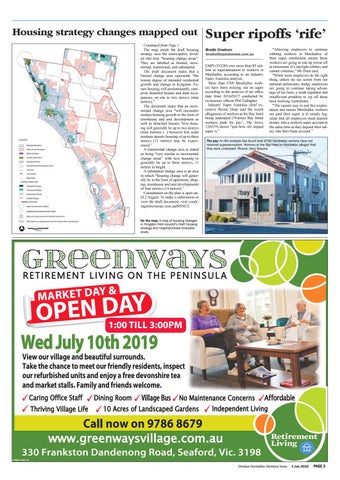 Housing strategy changes mapped out Continued from Page 1 The map inside the draft housing strategy sees the municipality divided into four “housing change areas”. They are labelled as limited, incremental, transitional, and substantial. The draft document states that a limited change area represents “the lowest degree of intended residential growth and change in Kingston. Future housing will predominantly comprise detached houses and dual occupancies, on one to two storeys (nine metres).” The document states that an incremental change area “will encounter modest housing growth in the form of townhouse and unit development as well as detached houses. New housing will generally be up to two storeys (nine metres) (...) however low scale medium density housing of up to three storeys (11 metres) may be experienced.” A transitional change area is stated as being “very similar to incremental change areas” with new housing to generally be up to three storeys, 11 metres in height. A substantial change area is an area in which “housing change will generally be in the form of apartment, shoptop, townhouse and unit developments of four storeys (14 metres).” Consultation on the plan is open until 2 August. To make a submission or view the draft document, visit yourkingstonyoursay.com.au/HSNCS.

Super ripoffs ‘rife’ Brodie Cowburn brodie@baysidenews.com.au EMPLOYERS owe more than $9 million in superannuation to workers in Mordialloc according to an Industry Super Australia analysis. More than 4700 Mordialloc workers have been missing out on super according to the analysis of tax office date from 2016/2017 conducted by ex-treasury official Phil Gallagher. Industry Super Australia chief executive Bernie Dean said the recent allegations of workers at the Bay hotel being underpaid (“Former Bay Hotel workers push for pay”, The News, 12/6/19) shows “just how rife unpaid super is.”

“Allowing employers to continue robbing workers in Mordialloc of their super entitlement means these workers are going to end up worse off at retirement. It’s daylight robbery and cannot continue,” Mr Dean said. “While most employers do the right thing, unless we see action from our national politicians, dodgy employers are going to continue taking advantage of lax laws, a weak regulator and insufficient penalties to rip off these hard working Australians. “The easiest way to end this exploitation and ensure Mordialloc workers are paid their super is to simply legislate that all employers must deposit money into a workers super account at the same time as they deposit their salary into their bank account.”

The pay: An ISA analysis has found over 4700 Mordialloc workers have not received superannuation. Workers at the Bay Hotel in Mordialloc alleged that they were underpaid. Picture: Gary Sissons

On the map: A map of housing changes in Kingston from council’s draft housing strategy and neighbourhood character study.

View our village and beautiful surrounds. Take the chance to meet our friendly residents, inspect our refurbished units and enjoy a free devonshire tea and market stalls. Family and friends welcome. Village Bus