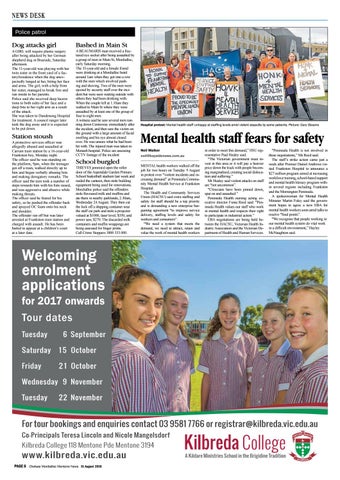 Dog attacks girl A GIRL will require plastic surgery after being attacked by her German shepherd dog in Braeside, Saturday afternoon. The 11-year-old was playing with her twin sister in the front yard of a factory/residence when the dog unexpectedly lunged at her, biting her face and arms. The girl, with a help from her sister, managed to break free and run inside to her parents. Police said she received deep lacerations to both sides of her face and a deep bite to her right arm as a result of the attack. She was taken to Dandenong Hospital for treatment. A council ranger later took the dog away and it is expected to be put down.

A protective services officer was allegedly abused and assaulted at Carrum train station by a 16-year-old Frankston boy, Monday night. The officer said he was standing on the platform, 9pm, when the teenager got off a train, walked directly up to him and began verbally abusing him and making derogatory remarks. The officer said the teen took a number of steps towards him with his fists raised, and was aggressive and abusive while making threats. The officer said he feared for his safety, so he pushed the offender back and sprayed OC foam onto his neck and shoulder. The offender ran off but was later arrested at Frankston train station and charged with assault. He has been bailed to appear at a children’s court at a later date.

A BEAUMARIS man received a fractured eye socket after being assaulted by a group of men in Main St, Mordialloc, early Saturday morning. The 35-year-old and a female friend were drinking at a Mordialloc hotel around 1am when they got into a row with the men which involved pushing and shoving. Two of the men were ejected by security staff over the incident but were seen waiting outside with others they had been drinking with. When the couple left at 1.10am they walked to Main St where they were assaulted by at least one of the group of four to eight men. A witness said he saw several men running down Centreway immediately after the incident, and then saw the victim on the ground with a large amount of facial swelling and his eye almost closed over. He was unsure what he had been hit with. The injured man was taken to Monash hospital. Police are assessing CCTV footage of the incident

THIEVES jemmied open the roller door of the Aspendale Garden Primary School basketball stadium last week and raided the canteen, then stole building equipment being used for renovations. Mordialloc police said the offenders stole flavoured milk and muffins and ate them in nearby parklands, 2.30am, Wednesday 24 August. They then cut the lock off a shipping container near the staff car park and stole a projector valued at $1000, laser level, $350, and power saw, $270. The discarded milk containers and muffin wrappings are being assessed for finger prints. Call Crime Stoppers 1800 333 000.

Mental health staff fears for safety Neil Walker neil@baysidenews.com.au MENTAL health workers walked off the job for two hours on Tuesday 9 August in protest over “violent incidents and increasing demand” at Peninsula Community Mental Health Service at Frankston Hospital. The Health and Community Services Union (HACSU) said extra staffing and safety for staff should be a top priority and is demanding a new enterprise bargaining agreement “to improve service delivery, staffing levels and safety for workers and consumers”. “We need a system that meets the demand, we need to attract, retain and value the work of mental health workers

in order to meet this demand,” HSU representative Paul Healey said. “The Victorian government must invest in this area or it will pay a heavier price down the track with people becoming marginalised, creating social dislocation and suffering.” Mr Healey said violent attacks on staff are “not uncommon”. “Clinicians have been pinned down, spat on and assaulted.” Peninsula Health nursing acting executive director Fiona Reed said: “Peninsula Health values our staff who work in mental health and respects their right to participate in industrial action.” EBA negotiations are being held between the HACSU, Victorian Health Industry Association and the Victorian Department of Health and Human Services.

“Peninsula Health is not involved in these negotiations,” Ms Reed said. The staff’s strike action came just a week after Premier Daniel Andrews visited Frankston Hospital to announce a $27 million program aimed at increasing workforce training, school-based support and mental health literacy program within several regions including Frankston and the Mornington Peninsula. A spokeswoman for Mental Health Minister Martin Foley said the government hopes to agree a new EBA for mental health workers soon amid talks to resolve “final points”. “We recognise that people working in our mental health system do vital work in a difficult environment,” Hayley McNaughton said.