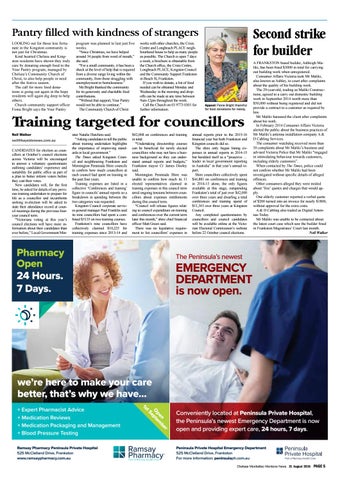 Pantry filled with kindness of strangers LOOKING out for those less fortunate in the Kingston community is not just for Christmas. Kind hearted Chelsea and Kingston residents have shown they truly care by donating enough food to the Your Pantry program, managed by Chelsea’s Community Church of Christ, to also help people in need after the festive season. The call for more food donations is going out again in the hope residents will again dig deep to help others. Church community support officer Fiona Bright says the Your Pantry

program was planned to last just five weeks. “Since Christmas, we have helped around 34 people from word of mouth,” she said. “For a small community, it has been a shock at the level of help that is required from a diverse range living within the community, from those struggling with unemployment to homelessness.” Ms Bright thanked the community for its generosity and charitable food contributions. “Without that support, Your Pantry would not be able to continue.” The Community Church of Christ

works with other churches, the Crisis Centre and Longbeach PLACE neighbourhood house to help as many people as possible. The Church is open 7 days a week; a brochure is obtainable from the Church office, the Crisis Centre, Longbeach PLACE, Kingston Council and the Community Support Frankston in Beach St, Frankston. If you wish to donate, a list of food needed can be obtained Monday and Wednesday in the morning and dropoffs can be made at any time between 9am-12pm throughout the week. Call the Church on 03 9773 0301 for further information.

Training targeted for councillors Neil Walker neil@baysidenews.com.au CANDIDATES for election as councillors at October’s council elections across Victoria will be encouraged to answer a voluntary questionnaire outlining candidates’ experience and suitability for public office as part of a plan to better inform voters before they cast their votes. New candidates will, for the first time, be asked for details of any previous training undertaken to prepare for life as a councillor and incumbents seeking re-election will be asked to state their attendance record at council meetings during the previous fouryear council term. “Victorians voting at this year’s council elections will have more information about their candidates than ever before,” Local Government Min-

ister Natalie Hutchins said. “Asking candidates to tell the public about training undertaken highlights the importance of improving standards in local government.” The Times asked Kingston Council and neighbouring Frankston and Mornington Peninsula Shire councils to confirm how much councillors at each council had spent on training in the past four years. Training expenses are listed in a collective ‘Conferences and training’ figure in councils’ annual reports so a breakdown in spending between the two categories was requested. Kingston Council corporate services general manager Paul Franklin said its nine councillors had spent a combined $5135 on two training courses. Frankston’s nine councillors have collectively claimed $10,225 for training expenses since 2013-14 and

$42,068 on conferences and training in total. “Undertaking directorship courses can be beneficial for newly elected councillors who may not have a business background so they can understand annual reports and budgets,” Frankston mayor Cr James Dooley said. Mornington Peninsula Shire was unable to confirm how much its 11 elected representatives claimed in training expenses in this council term amid ongoing tensions between councillors about expenses entitlements during this council term. “Council will release figures relating to council expenditure on training and conferences over the current term later this month,” shire chief financial officer Matt Green said. There was no legislative requirement to list councillors’ expenses in

annual reports prior to the 2015-16 financial year but both Frankston and Kingston councils did so. The shire only began listing expenses in annual reports in 2014-15 but heralded itself as a “proactive … leader in local government reporting in Australia” in that year’s annual report. Shire councillors collectively spent $44,881 on conferences and training in 2014-15 alone, the only figures available at this stage, outspending Frankston’s total of just over $42,000 over three years and dwarfing a total conferences and training spend of $11,343 over three years at Kingston Council. Any completed questionnaires by councillors and council candidates will be available online at the Victorian Electoral Commission’s website before 22 October council elections.

A FRANKSTON based builder, Ashleigh Maliki, has been fined $3000 in total for carrying out building work when unregistered. Consumer Affairs Victoria took Mr Maliki, also known as Ashley, to court after complaints about the quality of his building work. The 29-year-old, trading as Maliki Constructions, agreed to a carry out domestic building work in September 2014 worth more than $50,000 without being registered and did not provide a contract to a customer as required by law. Mr Maliki harassed the client after complaints about his work. In February 2014 Consumer Affairs Victoria alerted the public about the business practices of Mr Maliki’s antenna installation company A & D Cabling Services. The consumer watchdog received more than 50 complaints about Mr Maliki’s business and advised Victoria Police that Mr Maliki “engaged in intimidating behaviour towards customers, including elderly customers”. When contacted by The Times, police could not confirm whether Mr Maliki had been investigated without specific details of alleged offences. Other consumers alleged they were misled about ‘free’ quotes and charges that would apply. One elderly customer reported a verbal quote of $200 turned into an invoice for nearly $1800, without approval for the extra costs. A & D Cabling also traded as Digital Antennas Today. Mr Maliki was unable to be contacted about the latest court case which saw the builder fined in Frankston Magistrates’ Court last month. Neil Walker

we’re here to make your care better, that’s why we have...