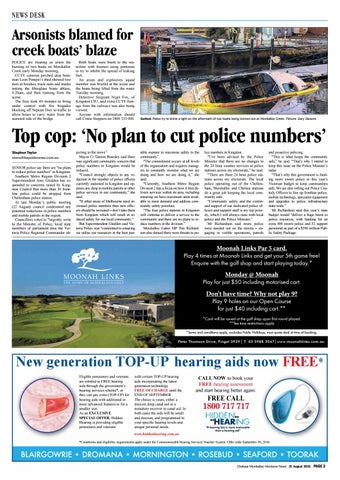 Arsonists blamed for creek boats’ blaze POLICE are treating as arson the burning of two boats on Mordialloc Creek early Monday morning. CCTV cameras perched atop boatman Leon Pompei’s shed showed two men in hoodies, track suits and masks setting the fibreglass boats ablaze, 4.20am, and then running from the scene. The fires took 40 minutes to bring under control with fire brigades blocking off Nepean Hwy to traffic to allow hoses to carry water from the seaward side of the bridge.

Both boats were burnt to the waterline with firemen using pontoons to try to inhibit the spread of leaking fuel. An arson and explosives squad member was briefed at the scene and the boats being lifted from the water Tuesday morning. Detective Sergeant Nigel Fox, of Kingston CIU, said extra CCTV footage from the railways was also being viewed. Anyone with information should call Crime Stoppers on 1800 333 000.

Gutted: Police try to shine a light on the aftermath of two boats being burned out at Mordialloc Creek. Picture: Gary Sissons

Top cop: ‘No plan to cut police numbers’ Stephen Taylor steve@baysidenews.com.au SENIOR police say there are “no plans to reduce police numbers” in Kingston. Southern Metro Region Division 2 Superintendent Amy Gledden has responded to concerns raised by Kingston Council that more than 30 frontline police could be stripped from Cheltenham police station. At last Monday’s public meeting (22 August) council condemned any potential reductions in police numbers and mobile patrols in the region. Councillors voted to “urgently write to the Minister of Police, local state members of parliament plus the Victoria Police Regional Commander ob-

jecting to the move”. Mayor Cr Tamsin Bearsley said there was significant community concern that police numbers in Kingston would be reduced. “Council strongly objects to any reduction in the number of police officers currently stationed in Kingston and opposes any drop in mobile patrols or other police services in our community,” she said. “If other areas of Melbourne need increased police numbers then new officers should be recruited – don’t take them from Kingston which will result in reduced safety for our local community.” But Superintendent Gledden said Victoria Police was “committed to ensuring we utilise our resources in the best pos-

sible manner to maximise safety to the community”. “The commitment occurs at all levels of the organisation and requires managers to constantly monitor what we are doing and how we are doing it,” she said. “Currently, Southern Metro Region Division 2 has a focus on how it best delivers services within its area, including ensuring we have maximum units available to meet demand and address community safety priorities. “The four police stations in Kingston will continue to deliver a service to the community and there are no plans to reduce numbers in the division.” Mordialloc Labor MP Tim Richardson also denied there were threats to po-

lice numbers in Kingston. “I’ve been advised by the Police Minister that there are no changes to the 24 hour counter services at police stations across my electorate,” he said. “There are three 24 hour police stations across my electorate. The local police operating out of the Cheltenham, Mordialloc and Chelsea stations do a great job keeping the local community safe. “Community safety and the continued support of our dedicated police officers and support staff is my top priority, which I will always raise with local police and the Police Minister.” Mr Richardson said more police were needed out on the streets – engaging in visible operations, patrols

and proactive policing. “This is what keeps the community safe,” he said. “That’s why I intend to keep this issue on the Police Minister’s radar. “That’s why this government is funding more sworn police in this year’s Victorian budget to keep communities safe. We are also rolling out Police Custody Officers to free up frontline police, mobile technology, specialist equipment and upgrades to police infrastructure state-wide.” Mr Richardson said this year’s state budget would “deliver a huge boost to police resources, with funding for an extra 406 sworn police and 52 support personnel as part of a $596 million Public Safety Package.

Play 4 times at Moonah Links and get your 5th game free! Enquire with the golf shop and start playing today.*

Play for just $50 including motorised cart.

with certain TOP-UP hearing aids incorporating the latest generation technology FREE OF CHARGE until the END OF SEPTEMBER The choice is yours, either a discreet deep canal aid or a miniature receiver in canal aid. In both cases the aids will be small and discreet, and programmed to your specific hearing levels and unique personal needs. www.hiddenhearing.com.au