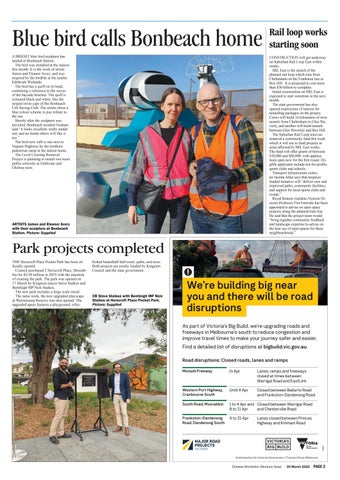 A BRIGHT blue bird sculpture has landed at Bonbeach Station. The bird was installed at the station this month. It is the work of artists James and Eleanor Avery, and was inspired by the birdlife at the nearby Edithvale Wetlands. The bird has a quiff on its head, containing a reference to the waves of the bayside beaches. The quiff is coloured black and white, like the striped swim caps of the Bonbeach Life Saving Club. The artists chose a blue colour scheme to pay tribute to the sea. Shortly after the sculpture was unveiled, Bonbeach resident Graham said “it looks excellent, really stands out, and no doubt others will like it too.” The bird now calls a site next to Nepean Highway by the northern pedestrian ramp at the station home. The Level Crossing Removal Project is planning to install two more public artworks at Edithvale and Chelsea soon.

CONSTRUCTION will get underway on Suburban Rail Loop East within weeks. SRL East is the stretch of the planned rail loop which runs from Cheltenham on the Frankston line to Box Hill. It is projected to cost more than $30 billion to complete. Initial construction on SRL East is expected to start sometime in the next month. The state government has also opened expressions of interest for tunnelling packages on the project. Crews will build 16 kilometers of twin tunnels from Cheltenham to Glen Waverly, and another will build tunnels between Glen Waverley and Box Hill. The Suburban Rail Loop team announced a community fund this week which it will use to fund projects in areas affected by SRL East works. The fund will offer grants of between $10,000 and $80,000, with applications open now for the first round. Eligible applicants include not-for-profits, sports clubs and schools. Transport infrastructure minister Jacinta Allan says that taxpayer funded initiative will “deliver new and improved parks, community facilities, and support for local sports clubs and events.” Royal Botanic Gardens Victoria Director Professor Tim Entwisle has been appointed to advise on open space projects along the planned train line. He said that the project team would “bring together community feedback and landscape expertise to advise on the best use of open spaces for these neighbourhoods.”

ARTISTS James and Eleanor Avery with their sculpture at Bonbeach Station. Picture: Supplied

We’re building big near you and there will be road disruptions As part of Victoria’s Big Build, we’re upgrading roads and freeways in Melbourne’s south to reduce congestion and improve travel times to make your journey safer and easier. Find a detailed list of disruptions at bigbuild.vic.gov.au Road disruptions: Closed roads, lanes and ramps Monash Freeway

Lanes, ramps and freeways closed at times between Warrigal Road and EastLink

THE Horscroft Place Pocket Park has been officially opened. Council purchased 2 Horscroft Place, Moorabbin for $2.49 million in 2019 with the intention of creating the park. The park was opened on 17 March by Kingston mayor Steve Staikos and Bentleigh MP Nick Staikos. The new park includes a large scale mural. The same week, the new upgraded playscape at Warraweena Reserve was also opened. The upgraded space features a playground, refur-