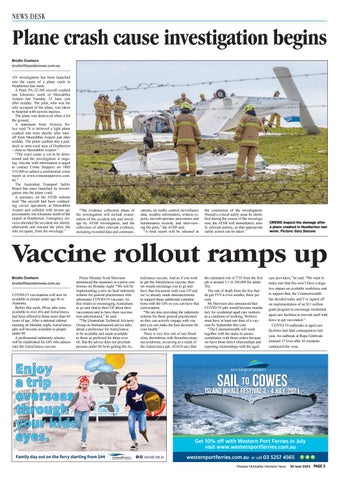 Plane crash cause investigation begins Brodie Cowburn brodie@baysidenews.com.au AN investigation has been launched into the cause of a plane crash in Heatherton last week. A Piper PA-32-300 aircraft crashed one kilometer north of Moorabbin Airport last Tuesday, 22 June, just after midday. The pilot, who was the sole occupant of the plane, was taken to hospital with serious injuries. The plane was destroyed when it hit the ground. A statement from Victoria Police read “it is believed a light plane crashed into trees shortly after takeoff from Moorabbin Airport just after midday. The plane crashed into a paddock in semi-rural area of Heatherton - close to Moorabbin Airport.” “The exact cause is yet to be determined and the investigation is ongoing. Anyone with information is urged to contact Crime Stoppers on 1800 333 000 or submit a confidential crime report at www.crimestoppersvic.com. au.” The Australian Transport Safety Board has since launched its investigation into the plane crash. A summary on the ATSB website read “the aircraft had been conducting circuit operations at Moorabbin Airport and collided with terrain approximately one kilometer north of the airport at Heatherton. Emergency services attended the accident site shortly afterwards and rescued the pilot, the sole occupant, from the wreckage.”

“The evidence collection phase of the investigation will include examination of the accident site and wreckage by ATSB investigators, and the collection of other relevant evidence, including recorded data and communi-

Prime Minister Scott Morrison announced the measures in a press conference on Monday night. “We will be implementing a new no fault indemnity scheme for general practitioners who administer COVID-19 vaccines. So this relates to encouraging Australians to go and chat to their GP about their vaccination and to have their vaccination administered,” he said. “The [Australian Technical Advisory Group on Immunisation] advice talks about a preference for AstraZeneca to be available and made available to those as preferred for those over 60. But the advice does not preclude persons under 60 from getting the As-

traZeneca vaccine. And so if you wish to get the AstraZeneca vaccine, then we would encourage you to go and have that discussion with your GP and we’ve already made announcements to support those additional consultations with the GPs so you can have that conversation. “We are also providing the indemnity scheme for those general practitioners so they can actively engage with you and you can make the best decision for your health.” There is very low risk of rare blood clots, thrombosis with thrombocytopenia syndrome, occurring as a result of the AstraZeneca jab. ATAGI says that

the estimated risk of TTS from the first jab is around 3.1 in 100,000 for under 50s. The rate of death from the few that do get TTS is even smaller, three per cent. Mr Morrison also announced that COVID-19 jabs would become mandatory for residential aged care workers as a condition of working. Workers must have at least one dose of a vaccine by September this year. “The Commonwealth will work together with the states to ensure compliance with those orders because we have those direct relationships and reporting relationships with the aged

care providers,” he said. “We want to make sure that this won’t have a negative impact on available workforce and to support that, the Commonwealth has decided today and I’ve signed off on implementation of an $11 million grant program to encourage residential aged care facilities to provide staff with leave to get vaccinated.” COVID-19 outbreaks at aged care facilities had fatal consequences last year. An outbreak at Bupa Edithvale claimed 17 lives after 44 residents contracted the virus.

Get 10% off with Western Port Ferries in July visit www.westernportferries.com.au Family day out on the ferry starting from $44