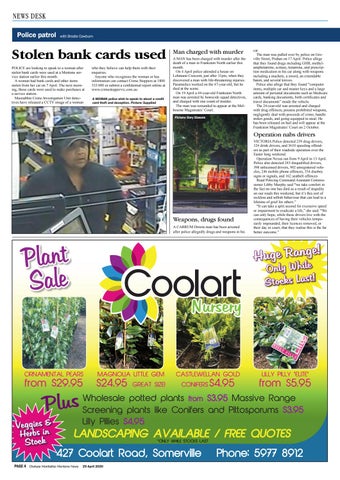 who they believe can help them with their enquiries. Anyone who recognises the woman or has information can contact Crime Stoppers at 1800 333 000 or submit a confidential report online at www.crimestoppervic.com.au A WOMAN police wish to speak to about a credit card theft and deception. Picture: Supplied

Man charged with murder A MAN has been charged with murder after the death of a man in Frankston North earlier this month. On 4 April police attended a house on Lehmann Crescent, just after 11pm, when they discovered a man with life-threatening injuries. Paramedics worked on the 47-year-old, but he died at the scene. On 19 April a 44-year-old Frankston North man was arrested by homicide squad detectives, and charged with one count of murder. The man was remanded to appear at the Melbourne Magistrates’ Court. Picture: Gary Sissons

car. The man was pulled over by police on Greville Street, Prahan on 17 April. Police allege that they found drugs including GHB, methylamphetamine, ecstasy, ketamine, and prescription medication in his car along with weapons including a machete, a sword, an extendable baton, and several knives. Police also allege that they found “computer items, multiple car and master keys and a large amount of personal documents such as Medicare cards, banking documents, birth certificates and travel documents” inside the vehicle. The 24-year-old was arrested and charged with drug offences, possess prohibited weapons, negligently deal with proceeds of crime, handle stolen goods, and going equipped to steal. He has been released on bail and will appear at the Frankston Magistrates’ Court on 2 October.

Weapons, drugs found A CARRUM Downs man has been arrested after police allegedly drugs and weapons in his

VICTORIA Police detected 259 drug drivers, 124 drink drivers, and 3610 speeding offenders as part of their roadside operation over the Easter long weekend. Operation Nexus ran from 9 April to 13 April. Police also detected 243 disqualified drivers, 398 unlicensed drivers, 902 unregistered vehicles, 246 mobile phone offences, 354 disobey signs or signals, and 162 seatbelt offences Road Policing Command Assistant Commissioner Libby Murphy said “we take comfort in the fact no one has died as a result of stupidity on our roads this weekend, but it’s this sort of reckless and selfish behaviour that can lead to a lifetime of grief for others.” “It can take a split second for excessive speed or impairment to eradicate a life,” she said. “We can only hope, while these drivers live with the consequences of having their vehicles temporarily impounded, their licences removed, or their day in court, that they realise this is the far better outcome.”