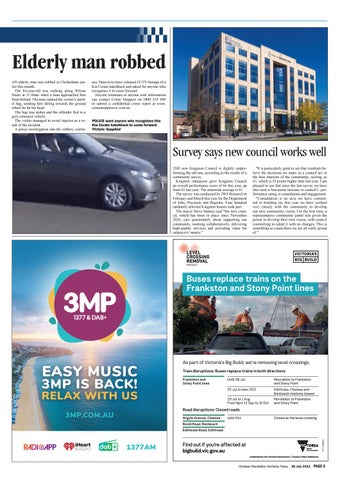 Elderly man robbed ues. Detectives have released CCTV footage of a Kia Cerato hatchback and asked for anyone who recognises it to come forward. Anyone witnesses or anyone with information can contact Crime Stoppers on 1800 333 000 or submit a confidential crime report at www. crimestoppersvic.com.au POLICE want anyone who recognises this Kia Cerato hatchback to come forward. Picture: Supplied

Survey says new council works well THE new Kingston Council is slightly outperforming the old one, according to the results of a community survey. Kingston ratepayers gave Kingston Council an overall performance score of 66 this year, up from 62 last year. The statewide average is 61. The survey was conducted by JWS Research in February and March this year for the Department of Jobs, Precincts and Regions. Four hundred randomly selected Kingston houses took part. The mayor Steve Staikos said “the new council, which has been in place since November 2020, care passionately about supporting our community, working collaboratively, delivering high-quality services and providing value for ratepayers’ money.”

“It is particularly great to see that residents believe the decisions we make as a council are in the best interests of the community, scoring us 65, which is 10 points higher than last year. I am pleased to see that since the last survey we have also seen a four-point increase in council’s performance rating in consultation and engagement. “Consultation is an area we have committed to building on, this year we have worked very closely with the community to develop our new community vision. For the first time, a representative community panel was given the power to develop their own vision, with council committing to adopt it with no changes. This is something as councillors we are all really proud of.”

Buses replace trains on the Frankston and Stony Point lines

Moorabbin to Frankston and Stony Point

Mordialloc to Frankston and Stony Point

Closed at the level crossing

AN elderly man was robbed in Cheltenham earlier this month. The 84-year-old was walking along Wilson Street at 11.30am when a man approached him from behind. The man yanked the victim’s satchel bag, sending him falling towards the ground where he hit his head. The bag was stolen and the offender fled in a grey-coloured vehicle. The victim managed to avoid injuries as a result of the incident. A police investigation into the robbery contin-

Find out if you’re affected at bigbuild.vic.gov.au Authorised by the Victorian Government, 1 Treasury Place, Melbourne