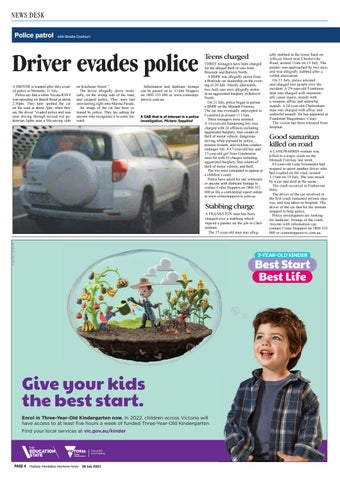 Driver evades police A DRIVER is wanted after they evaded police in Mentone, 11 July. Police say that a white Toyota RAV4 was speeding on Beach Road at about 2.30pm. They later spotted the car on the road at about 3pm, when they say the driver “evaded police and was seen driving through several red pedestrian lights near a life-saving club

on Kitchener Street.” The driver allegedly drove erratically, on the wrong side of the road, and escaped police, They were last seen turning right onto Marina Parade. An image of the car has been released by police. They are asking for anyone who recognises it to come forward.

Information and dashcam footage can be passed on to Crime Stoppers on 1800 333 000 or www.crimestoppersvic.com.au

A CAR that is of interest in a police investigation. Picture: Supplied

Teens charged THREE teenagers have been charged for the alleged theft of cars from Braeside and Balwyn North. A BMW was allegedly stolen from a Braeside car dealership on the evening of 20 July. Shortly afterwards, two Audi cars were allegedly stolen in an aggravated burglary in Balwyn North. On 21 July, police began to pursue a BMW on the Monash Freeway. The car was eventually intercepted in Fyansford at around 11.15am. Three teenagers were arrested. A 14-year-old Dandenong boy was charged with 24 offences including aggravated burglary, four counts of theft of motor vehicle, dangerous driving while pursued by police, possess firearm, and reckless conduct endanger life. A 17-year-old boy and 17-year-old girl from Cranbourne were hit with 16 charges including aggravated burglary, four counts of theft of motor vehicle, and theft. The trio were remanded to appear at a children’s court. Police have asked for any witnesses or anyone with dashcam footage to contact Crime Stoppers on 1800 333 000 or file a confidential report online at www.crimestoppersvic.com.au

A FRANKSTON man has been charged over a stabbing which injured a painter on the job in Cheltenham. The 57-year-old man was alleg-

edly stabbed in the lower back on Jellicoe Street near Chesterville Road, around 11am on 13 July. The painter was approached by two men, and was allegedly stabbed after a verbal altercation. On 21 July, police arrested and charged two people over the incident. A 29-year-old Frankston man was charged with intentionally cause injury, assault with a weapon, affray and unlawful assault. A 24-year-old Cheltenham man was charged with affray and unlawful assault. He has appeared at Frankston Magistrates’ Court. The victim has been released from hospital.

Good samaritan killed on road A LANGWARRIN woman was killed in a tragic crash on the Monash Freeway last week. 63-year-old Luda Sezonenka had stopped to assist another driver who had crashed on the road, around 3.15am on 19 July. She was struck by a car and died at the scene. The crash occurred in Endeavour Hills. The driver of the car involved in the first crash sustained serious injuries, and was taken to hospital. The driver of the car that hit the woman stopped to help police. Police investigators are looking for dashcam footage of the crash. Anyone with information can contact Crime Stoppers on 1800 333 000 or crimestoppersvic.com.au.