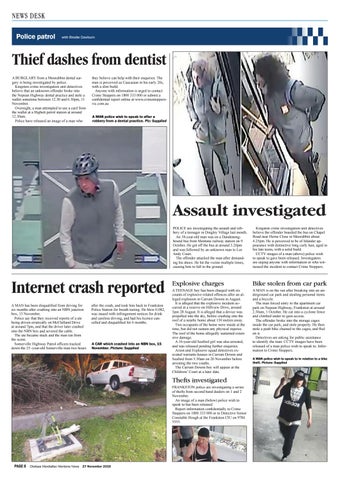 Thief dashes from dentist A BURGLARY from a Moorabbin dental surgery is being investigated by police. Kingston crime investigation unit detectives believe that an unknown offender broke into the Nepean Highway dental practice and stole a wallet sometime between 12.30 and 6.30pm, 11 November. Overnight, a man attempted to use a card from the wallet at a Highett petrol station at around 12.30am. Police have released an image of a man who

they believe can help with their enquiries. The man is perceived as Caucasian in his early 20s, with a slim build. Anyone with information is urged to contact Crime Stoppers on 1800 333 000 or submit a confidential report online at www.crimestoppersvic.com.au A MAN police wish to speak to after a robbery from a dental practice. Pic: Supplied

Internet crash reported A MAN has been disqualified from driving for six months after crashing into an NBN junction box, 15 November. Police say that they received reports of a ute being driven erratically on McClelland Drive at around 7pm, and that the driver later crashed into the NBN box and severed the cable. The ute became stuck and the man ran from the scene. Somerville Highway Patrol officers tracked down the 25 -year-old Somerville man two hours

after the crash, and took him back to Frankston Police Station for breath testing. He blew 0.082, was issued with infringement notices for drink and careless driving, and had his licence cancelled and disqualified for 6 months.

A CAR which crashed into an NBN box, 15 November. Picture: Supplied

POLICE are investigating the assault and robbery of a teenager in Dingley Village last month. An 18-year-old man was on a Dandenongbound bus from Mentone railway station on 9 October. He got off the bus at around 5.20pm and was followed by an unknown man to Lee Andy Court. The offender attacked the man after demanding his shoes. He hit the victim multiple times, causing him to fall to the ground.

Kingston crime investigation unit detectives believe the offender boarded the bus on Chapel Road near Herne Close in Moorabbin about 4.25pm. He is perceived to be of Islander appearance with distinctive long curly hair, aged in his late teens, with a solid build. CCTV images of a man (above) police wish to speak to gave been released. Investigators are urging anyone with information or who witnessed the incident to contact Crime Stoppers.

A TEENAGE boy has been charged with six counts of explosive related offences after an alleged explosion in Carrum Downs in August. It is alleged that the explosive incident occurred at a reserve on Hillview Drive, around 5pm 28 August. It is alleged that a device was propelled into the sky, before crashing into the roof of a nearby home about 150 metres away. Two occupants of the home were inside at the time, but did not sustain any physical injuries. The roof of the home allegedly sustained extensive damage. A 16-year-old Seaford girl was also arrested, and was released pending further enquiries. Arson and Explosive squad detectives executed warrants houses in Carrum Downs and Seaford from 5.30am on 20 November before arresting the two youths. The Carrum Downs boy will appear at the Childrensâ&#x20AC;&#x2122; Court at a later date.

A MAN is on the run after breaking into an underground car park and stealing personal items and a bicycle. The man forced entry to the apartment car park on Nepean Highway, Frankston at around 2.50am, 1 October. He cut into a cyclone fence and climbed under to gain access. The offender broke into the storage cages inside the car park, and stole property. He then stole a push bike chained to the cages, and fled on it. Detectives are asking for public assistance to identify the man. CCTV images have been released of a man police wish to speak to. Information to Crime Stoppers.

Thefts investigated FRANKSTON police are investigating a series of thefts from second hand dealers on 1 and 2 November. An image of a man (below) police wish to speak to has been released. Report information confidentially to Crime Stoppers on 1800 333 000 or to Detective Senior Constable Hough at the Frankston CIU on 9784 5555.

A MAN police wish to speak to in relation to a bike theft. Picture: Supplied