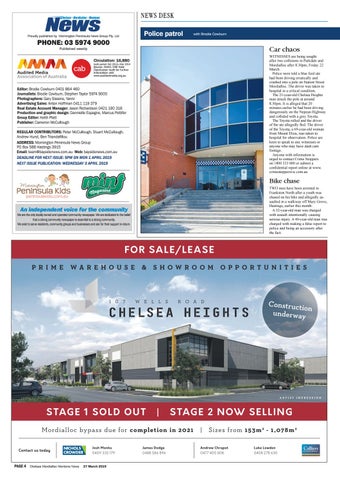 Car chaos WITNESSES are being sought after two collisions in Parkdale and Mordialloc after 8.30pm, Friday 22 March. Police were told a blue ford ute had been driving erratically and crashed into a pole on Station Street Mordialloc. The driver was taken to hospital in a critical condition. The 21-year-old Chelsea Heights man struck the pole at around 8.50pm. It is alleged that 20 minutes earlier he had been driving dangerously on the Nepean Highway and collided with a grey Toyota. The Toyota rolled and the driver of the ute allegedly fled. The driver of the Toyota, a 69-year-old woman from Mount Eliza, was taken to hospital for observation. Police are keen to speak to any witnesses or anyone who may have dash cam footage. Anyone with information is urged to contact Crime Stoppers on 1800 333 000 or submit a confidential report online at www. crimestoppersvic.com.au

TWO men have been arrested in Frankston North after a youth was chased on his bike and allegedly assaulted in a walkway off Mary Grove, Hastings, earlier this month. A 32-year-old man was charged with assault intentionally causing serious injury. A 40-year-old man was charged with making a false report to police and being an accessory after the fact.