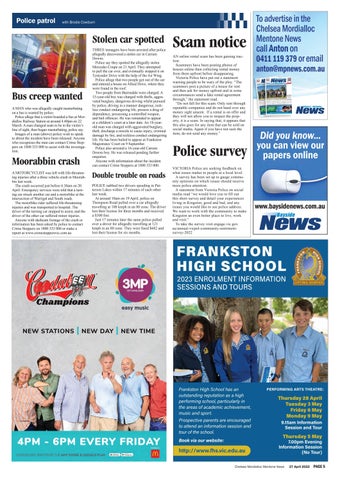 Moorabbin crash A MOTORCYCLIST was left with life-threatening injuries after a three vehicle crash in Moorabbin last week. The crash occurred just before 6.30am on 20 April. Emergency services were told that a turning car struck another car and a motorbike at the intersection of Warrigal and South roads. The motorbike rider suffered life-threatening injuries and was transported to hospital. The driver of the turning car stopped to assist, and the driver of the other car suffered minor injuries. Anyone with dashcam footage of the crash or information has been asked by police to contact Crime Stoppers on 1800 333 000 or make a report at www.crimestoppersvic.com.au

THREE teenagers have been arrested after police allegedly discovered a stolen car in Carrum Downs. Police say they spotted the allegedly stolen Mercedes Coupe on 21 April. They attempted to pull the car over, and eventually stopped it on Tyntynder Drive with the help of the Air Wing. Police allege that two people got out of the car and entered a house on Allied Drive, where they were found in the roof. Two people from Bairnsdale were charged. A 15-year-old boy was charged with thefts, aggravated burglary, dangerous driving whilst pursued by police, driving in a manner dangerous, reckless conduct endangering life, possess a drug of dependence, possessing a controlled weapon, and bail offences. He was remanded to appear at a children’s court at a later date. An 18-yearold man was charged with aggravated burglary, theft, discharge a missile to cause injury, criminal damage by fire, and reckless conduct endangering life. He has been bailed to appear at Frankston Magistrates’ Court on 9 September. Police also arrested a 16-year-old Carrum Downs boy. He was released pending further enquiries. Anyone with information about the incident can contact Crime Stoppers at 1800 333 000.

Double trouble on roads POLICE nabbed two drivers speeding in Patterson Lakes within 17 minutes of each other last week. At around 10am on 19 April, police on Thompson Road pulled over a car allegedly travelling at 108 kmph in an 80 zone. The driver lost their license for three months and received a $500 fine. Just 17 minutes later the same police pulled over a driver for allegedly travelling at 121 kmph in an 80 zone. They were fined $682 and lost their license for six months.

Scam notice AN online rental scam has been gaining traction. Scammers have been posting photos of houses online then collecting rental money from them upfront before disappearing. Victoria Police have put out a statement warning people to be wary of the ploy. “The scammers post a picture of a house for rent and then ask for money upfront and in some circumstances send a fake rental agreement through,” the statement read. “Do not fall for this scam. Only rent through reputable companies and do not hand over any money sight unseen. If a rental is on offer and they will not allow you to inspect the property, it is a scam. In saying that, it appears that this also goes for any item that can be sold on social media. Again if you have not seen the item, do not send any money.”

Police survey VICTORIA Police are seeking feedback on what issues matter to people at a local level. A survey has been set up to gauge community opinions on which issues should receive more police attention. A statement from Victoria Police on social media read “we would love you to fill out this short survey and detail your experiences living in Kingston, good and bad, and any issues you would like to see police address. We want to work with the community to make Kingston an even better place to live, work and visit.” To take the survey visit engage.vic.gov. au/annual-vicpol-community-sentimentsurvey-2022

anton@mpnews.com.au Chelsea • Mord YOUR GUIDE TO WHAT’S ON THIS WEEKEND FOR PENINSULA FAMILIES

YOUR GUIDE ON THIS TO WHAT’S FOR WEEKEND FAMILIES PENINSULA

community For all your

team@bayside 9000Fororallemail: your advertising and editorial needs, call us on 03

investigation site Ombudsman lowed. An decisions made at the for governsite.govern- Kingston and the state approved plans Ombudsman investigation at the to into planning lowed. AnCouncil statestatement, council ar- ceed until 1999, aand the some ofthat to the in council ceed until councilnecessary the development preventchanges a In changes planning decisions made at the site application Cr found BrodieofCowburn to aninto developmentintroduce some arnecessary stointroduce planCove site. aDevelopment three-storey in inment eastoatthethearea,” it has made 2003, a fivecontrols says in ment development that council approved plans for controls found“interim Cr for to the area,” brodie@baysidenews.com.au until prevent the permits the planning subdivision Development approved the planning areas where council in 1999, a the area development 2005, a four-storey planning minister a three-storey Cove site. is by 40-lot can eas at the council approved permits Staikos said. years. in Staikos two precinct five-storey ning controls to protect subdivision development will be halted for in 2018 two said. Cove 40-lot changes in 2003, a five stoThe rey is by planning in 2009,The u Endeavour 2012,Cove precinct Brodie Cowburn areas where be halted for two years. The Endeavour to pay $60,000 has agreed marina and cover theRiver Council rezoning in three denews.com.a more permanent KINGSTON ratepayers will de- development and The rey development in 2005, a four-storey 2011, athe in dePatterson River marina Patterson in 2018 will agreed to pay $60,000incurred the brodie@baysi of the site’s funding towards in ratepayer made.” five-storey in 2013, and 2018 feesde- the by a develbethe in 2009, cost of legalthe The saga when buildings site’s de- development page building saga of 5 two Hotel. for Council has Cove Hotel.inThe towards Staikos said to 1988 Cove legal fees. Cr the veloper’s a six-storey back into plansspans funding hearing a VCATsaid in 2011, a rezoning in 2012, oper at Staikos Continued will cover In 1994 spans back to 1988 when buildings velopment in ratepayer “avoid a po-developments fees will velopment ratepayers for council’s paying the fees. Cr that formed. multi-storey in Patterfirst and three po- precinct Endeavour balmed plans KINGSTON fees incurred by a devel- veloper’s legal thewill developwere first formed. In 1994 a six-storey building in 2013, “avoid aCove plans were tentially and uncertaine initial 20/10/21). costly(“Incompetenc lengthy, the fees plans for The News son Lakes. uncertain initial multi-storey developments in 2018 Chelsea approved cost of legal City ofsays that paying hearing into which changed Cove decisions” the City of Chelsea approved developtheStaikos costly and legal site, hearing”. (“Incompetence balmed for council’s oper at a VCATCove precinct in Patter- tentially lengthy, Kingston mayor Stevement that folplans for the “This hold will ensure that ment plans for the site, which changed years two-year the developer have in the The News 20/10/21). andthat hearing”. that council ensure the Endeavour considerably in the years that fol- Cove decisions” hold will says legal two-year come which will the planned development does not propro- considerably a legal todoes not settlement son Lakes. “This Steve Staikos Kingston mayor the developer have the planned development and which will that council legal settlement come to a

ON ON ies onboard activit of a ferry ticket. the purchase ys for FREE* with FREE* onboard activities for are included school holidays aboard these Jumpholida school times. Activities dates and are on select

are included with *Activities are on select sailing dates and times. Activities

the purchase of a ferry ticket.

Frankston High School has an outstanding reputation as a high performing school, particularly in the areas of academic achievement, music and sport.

Prospective parents are encouraged to attend an information session and tour of the school. Book via our website:

Thursday 28 April Tuesday 3 May Friday 6 May Monday 9 May 9.15am Information Session and Tour