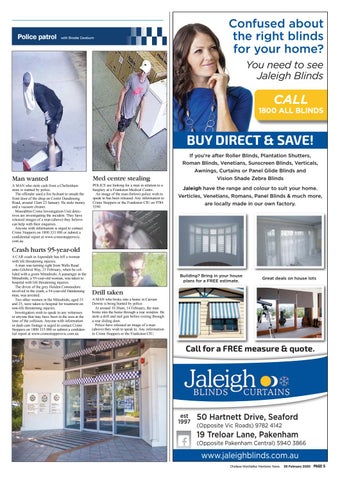 A MAN who stole cash from a Cheltenham store is wanted by police. The offender used a fire hydrant to smash the front door of the shop on Centre Dandenong Road, around 12am 23 January. He stole money and a vacuum cleaner. Moorabbin Crime Investigation Unit detectives are investigating the incident. They have released images of a man (above) they believe can help with their enquiries. Anyone with information is urged to contact Crime Stoppers on 1800 333 000 or submit a confidential report at www.crimestoppersvic. com.au

POLICE are looking for a man in relation to a burglary at a Frankston Medical Centre. An image of the man (below) police wish to speak to has been released. Any information to Crime Stoppers or the Frankston CIU on 9784 5590.

Vision Shade Zebra Blinds Jaleigh have the range and colour to suit your home. Verticles, Venetians, Romans, Panel Blinds &amp; much more, are locally made in our own factory.

Crash hurts 95-year-old A CAR crash in Aspendale has left a woman with life threatening injuries. A man was turning right from Wells Road onto Gilchrist Way, 21 February, when he collided with a green Mitsubishi. A passenger in the Mitsubishi, a 95-year-old woman, was taken to hospital with life threatening injuries. The driver of the grey Holden Commodore involved in the crash, a 54-year-old Dandenong man, was arrested. Two other women in the Mitsubishi, aged 55 and 25, were taken to hospital for treatment on non-life threatening injuries. Investigators wish to speak to any witnesses or anyone that may have been in the area at the time of the collision. Anyone with information or dash cam footage is urged to contact Crime Stoppers on 1800 333 000 or submit a confidential report at www.crimestoppersvic.com.au

Drill taken A MAN who broke into a home in Carrum Downs is being hunted by police. At around 10.30am, 14 February, the man broke into the home through a rear window. He stole a drill and nail gun before exiting through a rear sliding door. Police have released an image of a man (above) they wish to speak to. Any information to Crime Stoppers or the Frankston CIU.