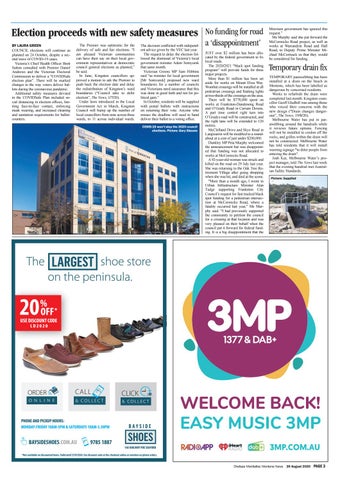 The Premier was optimistic for the delivery of safe and fair elections. “I am pleased Victorian communities can have their say on their local government representatives at democratic council general elections as planned,” he said. In June, Kingston councillors approved a motion to ask the Premier to push back the election date and delay the redistribution of Kingston’s ward boundaries (“Council asks to defer election”, The News, 1/7/20). Under laws introduced in the Local Government Act in March, Kingston Council will bump up the number of local councillors from nine across three wards, to 11 across individual wards.

The decision conflicted with independent advice given by the VEC last year. The request to delay the election followed the dismissal of Victoria’s local government minister Adem Somyurek that same month. Victorian Greens MP Sam Hibbins said “as minister for local government [Mr Somyurek] proposed new ward boundaries for a number of councils and Victorians need assurance that this was done in good faith and not for political gain.” In October, residents will be supplied with postal ballots with instructions on returning their vote. Anyone who misses the deadline will need to hand deliver their ballot to a voting office. COVID-19 won’t stop the 2020 council elections. Picture: Gary Sissons

No funding for road a ‘disappointment’ JUST over $2 million has been allocated by the federal government to fix local roads. The 2020/2021 “black spot funding program” will provide funds for three major projects. More than $1 million has been set aside for works on Mount Eliza Way. Wombat crossings will be installed at all pedestrian crossings and flashing lights at two-thirds of the crossings on the area. There will be $778,000 spent on works at Frankston-Dandenong Road and O’Grady Road in Carrum Downs. A part time control right turn into O’Gradys road will be constructed, and the right lane will be extended to 120 metres. McClelland Drive and Skye Road in Langwarrin will be modified to a roundabout at a cost of just under $200,000. Dunkley MP Peta Murphy welcomed the announcement but was disappointed that funding was not allocated to works at McCormicks Road. A 92-year-old woman was struck and killed on the road on 29 July last year. She was returning to the Oak Tree Retirement Village after going shopping when she was hit, and died at the scene. “More than a month ago, I wrote to Urban Infrastructure Minister Alan Tudge supporting Frankston City Council’s request for fast tracked black spot funding for a pedestrian intersection at McCormicks Road, where a fatality occurred last year,” Ms Murphy said. “I had previously supported the community to petition the council for a crossing at that location and was very pleased on their behalf when the council put it forward for federal funding. It is a big disappointment that the

Morrison government has ignored this request.” Ms Murphy said she put forward the McCormicks Road project, as well as works at Warrandyte Road and Hall Road, to Deputy Prime Minister Michael McCormack so that they would be considered for funding.

Temporary drain fix TEMPORARY parawebbing has been installed at a drain on the beach in Mentone, which has been labelled as dangerous by concerned residents. Works to refurbish the drain were completed last month. Kingston councillor Geoff Gledhill was among those who voiced their concerns with the new design (“Drain changes dangerous”, The News, 19/8/20). Melbourne Water has put in parawebbing around the handrails while it reviews future options. Fencing will not be installed to cordon off the rocks, and grilles within the drain will not be constructed. Melbourne Water has told residents that it will install warning signage “to deter people from entering the drain”. Josh Kar, Melbourne Water’s project manager, told The News last week that the existing handrail met Australian Safety Standards. Picture: Supplied

The LARGEST shoe store on the peninsula.

*Not available on discounted items. Valid until 25/9/2020. Use discount code at the checkout online or mention on phone orders.