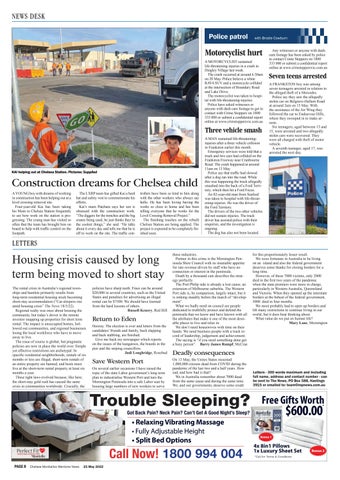 Motorcyclist hurt A MOTORCYCLIST sustained life-threatening injuries in a crash in Dingley Village last week. The crash occurred at around 6.30am on 20 May. Police believe a white RAV4 SUV and a motorcycle collided at the intersection of Boundary Road and Lake Drive. The motorcyclist was taken to hospital with life-threatening-injuries. Police have asked witnesses or anyone with dash cam footage to get in contact with Crime Stoppers on 1800 333 000 or submit a confidential report online at www.crimstoppersvic.com.au

Construction dreams for Chelsea child A YOUNG boy with dreams of working in construction has been helping out at a level crossing removal site. Four-year-old Kai has been taking his Mum to Chelsea Station frequently to see how work on the station is progressing. The young man has visited so often that the team has brought him on board to help with traffic control on the footpath.

The LXRP team has gifted Kai a hard hat and safety vest to commemorate his efforts. Kai’s mum Patchara says her son is obsessed with the construction work. “The diggers for the trenches and the big cranes being used, he just thinks they’re the coolest things,” she said. “He talks about it every day and tells me that he is off to work on the site. The traffic con-

trollers have been so kind to him along with the other workers who always say hello. He has been loving having the works so close to home and has been telling everyone that he works for the Level Crossing Removal Project.” The finishing touches on the rebuilt Chelsea Station are being applied. The project is expected to be completely finished soon.

A MAN sustained life-threateninginjuries after a three vehicle collision in Frankston earlier this month. Emergency services were told that a truck and two cars had collided on the Frankston Freeway near Cranbourne Road. The crash happened at around 11am on 13 May. Police say that traffic had slowed after a dog ran into the road. While this was happening the truck allegedly smashed into the back of a Ford Territory, which then hit a Ford Focus. An 82-year-old man from Seaford was taken to hospital with life-threatening-injuries. He was the driver of the Ford Territory. The drivers of the two other vehicles did not sustain injuries. The truck driver has assisted police with their enquiries, and the investigation is ongoing. The dog has also not been located.

Any witnesses or anyone with dashcam footage has been asked by police to contact Crime Stoppers on 1800 333 000 or submit a confidential report online at www.crimstoppersvic.com.au

Seven teens arrested A FRANKSTON boy was among seven teenagers arrested in relation to the alleged theft of a Mercedes. Police say they saw the allegedly stolen car on Belgrave-Hallam Road at around 2am on 15 May. With the assistance of the Air Wing they followed the car to Endeavour Hills, where they swooped in to make arrests. Six teenagers, aged between 13 and 15, were arrested and two allegedly stolen cars were recovered. They were all charged with theft of motor vehicle. A seventh teenager, aged 17, was arrested the next day.

Housing crisis caused by long term being moved to short stay The rental crisis in Australia’s regional townships and hamlets primarily results from long-term residential housing stock becoming short-stay accommodation (“Car-sleepers rise amid housing crisis” The News 18/5/22). Regional realty was once about housing the community, but today’s driver is the remote investor snapping up properties for short term rental. The impact is unoccupied homes, hollowed out communities, and regional businesses losing the local workforce who have to move away to live. The issue of course is global, but pragmatic policies are now in place the world over. Simple yet effective restrictions are archetypal. In specific residential neighborhoods, rentals of six months or less are illegal, short-term rentals of an entire property are banned, and hosts must live at the short-term rental property at least six months a year. These tight laws evolved because, like here, the short-stay gold rush has caused the same crisis in communities worldwide. Crucially, the

policies have sharp teeth. Fines can be around $20,000 in several countries, such as the United States and penalties for advertising an illegal rental can be $7500. We should have learned from the hard lessons of others. Russell Kenery, Red Hill

Return to Eden Hooray. The election is over and letters from the candidates’ friends and family, back slapping and back stabbing, are finished. Give me back my newspaper which reports on the issues of the kangaroos, the boards in the pier and the sniping councillors. Judi Loughridge, Rosebud

these industries. Partner in this crime is the Mornington Peninsula Shire Council with its insatiable appetite for rate revenue driven by staff who have no connection or interest in the peninsula. Death by a thousand cuts describes the strategy perfectly. The Port Philip side is already a lost cause; an extension of Melbourne suburbia. The Western Port side is, by comparison, largely intact, but it is sinking steadily before the march of “development”. What we badly need on council are people dedicated to truthfully protect and defend the peninsula that we know and have known with all the attributes that make it one of the most desirable places to live and relax in. We don’t need housewives with time on their hands. We need business people with a track record of leadership, judgement and achievement. The saying is “if you need something done get a busy person”. Barry James Rumpf, McCrae

for this proportionately lesser result. We were fortunate in Australia to be living on an island and also the federal government deserves some thanks for closing borders for a long time. However, of these 7000 victims, only 2000 died in the first two years of the pandemic when the state premiers were more in charge, particularly in Western Australia, Queensland and Victoria. When they opened up the interstate borders at the behest of the federal government, 5000 died in four months. We most probably had to open up borders and lift many restrictions to continue living in our world, but it does bear thinking about. What value do we put on human life? Mary Lane, Mornington

Deadly consequences On 13 May, the Unites States mourned 1,000,000 citizens dead from COVID during the pandemic of the last two and a half years. How sad, and how bad is that? We in Australia remember about 7000 dead from the same cause and during the same time. We, and our governments, deserve some credit