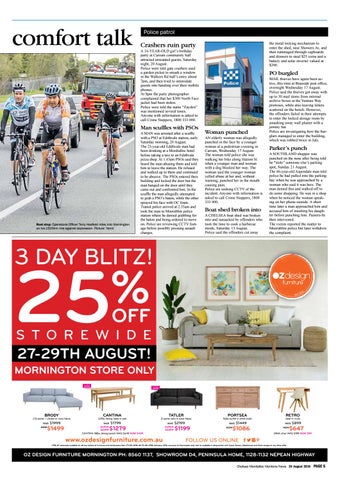 Police patrol A 14-YEAR-OLD girl’s birthday party at Carrum community hall attracted unwanted guests, Saturday night, 20 August. Police were told gate crashers used a garden picket to smash a window in the Walkers Rd hall’s entry about 7pm, and then tried to intimidate guests into handing over their mobile phones. At 8pm the party photographer complained that her $300 North Face jacket had been stolen. Police were told the name “Zayden” was mentioned several times. Anyone with information is asked to call Crime Stoppers, 1800 333 000.

the metal locking mechanism to enter the shed, near Showers Av, and then rummaged through cupboards and drawers to steal $25 coins and a battery and solar inverter valued at $390.

A MAN was arrested after a scuffle with a PSO at Edithvale station, early Saturday morning, 20 August. The 23-year-old Edithvale man had been drinking at a Mordialloc hotel before taking a taxi to an Edithvale pizza shop. At 1.45am PSOs said they heard the man abusing them and told him to leave the station. He refused and walked up to them and continued to be abusive. The PSOs entered their building and locked the door but the man banged on the door until they came out and confronted him. In the scuffle the man allegedly attempted to grab a PSO’s baton, while the other sprayed his face with OC foam. Transit police arrived at 2.35am and took the man to Moorabbin police station where he denied grabbing for the baton and being ordered to move on. Police are reviewing CCTV footage before possibly pressing assault charges.

AN elderly woman was allegedly punched in the face by a younger woman at a pedestrian crossing in Carrum, Wednesday 17 August. The woman told police she was walking her bike along Station St when a younger man and woman with a dog blocked her way. The woman said the younger woman yelled abuse at her and, without warning, punched her in the mouth causing pain. Police are seeking CCTV of the incident. Anyone with information is asked to call Crime Stoppers, 1800 333 000.

A CHELSEA boat shed was broken into and ransacked by offenders who took the time to cook a barbecue inside, Saturday 13 August. Police said the offenders cut away

MAIL thieves have again been active, this time at Braeside post office, overnight Wednesday 17 August. Police said the thieves got away with up to 30 mail items from internal archive boxes at the Venture Way premises, while also leaving letters scattered on the bench. However, the offenders failed in their attempts to enter the locked storage room by smashing away wall plaster with a jemmy bar. Police are investigating how the burglars managed to enter the building, which was robbed twice in July.

A SOUTHLAND shopper was punched on the nose after being told he “stole” someone else’s parking spot, Sunday 21 August. The 46-year-old Aspendale man told police he had pulled into the parking bay when he was approached by a woman who said it was hers. The man denied this and walked off to do some shopping. He was in a shop when he noticed the woman speaking on her phone outside. A short time later a man approached him and accused him of insulting his daughter before punching him. Passers-by then intervened. The victim reported the matter to Moorabbin police but later withdrew the complaint.

165w buffet in white wash WAS

desk in multi WAS

www.ozdesignfurniture.com.au 25% off storewide available on all new orders of furniture and homewares from 27-08-2016 till 29-08-2016 inclusive. Offer excusive to Mornington only. Not to available in conjunction with Super Savers, Glasshouse and Circa ranges or any other offer.