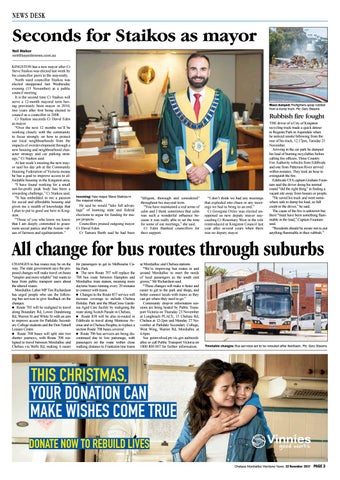 Seconds for Staikos as mayor Neil Walker neil@baysidenews.com.au KINGSTON has a new mayor after Cr Steve Staikos was elected last week by his councillor peers to the mayoralty. North ward councillor Staikos was elected unopposed last Wednesday evening (15 November) at a public council meeting. It is the second time Cr Staikos will serve a 12-month mayoral term having previously been mayor in 2010, two years after first being elected to council as a councillor in 2008. Cr Staikos succeeds Cr David Eden as mayor. “Over the next 12 months we’ll be working closely with the community to focus strongly on how to protect our local neighbourhoods from the impacts of overdevelopment through a new housing and neighbourhood character strategy and car parking strategy,” Cr Staikos said. At last week’s meeting the new mayor said his day job at the Community Housing Federation of Victoria means he has a goal to improve access to affordable housing in the Kingston area. “I have found working for a small not-for-profit peak body has been a rewarding challenge,” Cr Staikos said. “It has embedded in me a passion for social and affordable housing and given me a wealth of knowledge that I plan to put to good use here in Kingston. “Those of you who know me know that I am deeply committed to grassroots social justice and the Aussie values of fairness and egalitarianism.”

He said he would “take full advantage” of looming state and federal elections to argue for funding for major projects. Councillors praised outgoing mayor Cr David Eden. Cr Tamara Barth said he had been

“diligent, thorough and considered” throughout his mayoral term. “You have maintained a real sense of calm and I think sometimes that calm was such a wonderful influence because it was really able to set the tone for some of our meetings,” she said. Cr Eden thanked councillors for their support.

“I don’t think we had any meetings that exploded into chaos or any meetings we had to bring to an end.” Cr Georgina Oxley was elected unopposed as new deputy mayor succeeding Cr Rosemary West in the role reintroduced at Kingston Council last year after several years when there was no deputy mayor.

THE driver of a City of Kingston recycling truck made a quick detour to Regents Park in Aspendale when he noticed smoke billowing from the rear of his truck, 12.17pm, Tuesday 21 November. Arriving in the car park he dumped his load of burning recyclables before calling fire officers. Three Country Fire Authority vehicles from Edithvale and one from Patterson River arrived within minutes. They took an hour to extinguish the fire. Edithvale CFA captain Graham Fountain said the driver doing his normal round “did the right thing” in finding a vacant site away from houses or people. “He saved his truck and went somewhere safe to dump his load, so full credit to the driver,” he said. The cause of the fire is unknown but there “must have been something flammable in the load,” Captain Fountain said. “Residents should be aware not to put anything flammable in their rubbish.”

All change for bus routes through suburbs CHANGES to bus routes may be on the way. The state government says the proposed changes will make travel on buses “simpler and more reliable” but wants to hear from public transport users about the altered routes. Mordialloc Labor MP Tim Richardson has urged people who use the following bus services to give feedback on the changes. n Route 705 will be realigned to travel along Boundary Rd, Lower Dandenong Rd, Warren St and White St with an aim to improve access for Parkdale Secondary College students and the Don Tatnell Leisure Centre n Route 708 buses will split into two shorter journeys, with Route 708 realigned to travel between Mordialloc and Chelsea via Wells Rd, making it easier

for passengers to get to Melbourne Cable Park n The new Route 707 will replace the 708 bus route between Hampton and Mordialloc train station, meaning more daytime buses running every 20 minutes to connect with trains n Changes to the Route 857 service will increase coverage to include Chelsea Holiday Park and the BlueCross Gardenia Aged Care facility by realigning the route along Scotch Parade in Chelsea. n Route 858 will be also re-routed in Edithvale to travel along Montrose Avenue and in Chelsea Heights, to replace a section Route 708 buses covered n Route 706 bus services are being discontinued due to low patronage, with passengers on the route within close walking distance to Frankston line trains

at Mordialloc and Chelsea stations “We’re improving bus routes in and around Mordialloc to meet the needs of local passengers as the south east grows,” Mr Richardson said. “These changes will make it faster and easier to get to the park and shops, and better connect locals with trains so they can get where they need to go.” Community drop-in information sessions are being hosted by Public Transport Victoria on Thursday 23 November at Longbeach PLACE, 15 Chelsea Rd, Chelsea at 12-2pm and Monday 27 November at Parkdale Secondary College, West Wing, Warren Rd, Mordialloc at 4-6pm. See getinvolved.ptv.vic.gov.au/mordialloc or call Public Transport Victoria on 1800 800 007 for further information.