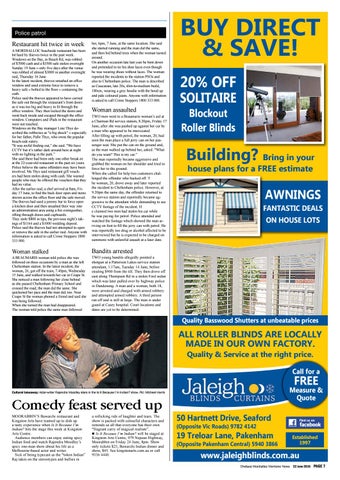 A MORDIALLOC beachside restaurant has been hit hard by thieves twice in the past week. Windows on the Bay, in Beach Rd, was robbed of $7000 cash and a $3500 safe stolen overnight Sunday 19 June – only five days after the venue was robbed of almost $3000 in another overnight raid, Thursday 16 June. In the latest incident, thieves smashed an office window and used extreme force to remove a heavy safe – bolted to the floor – containing the cash. Police said the thieves appeared to have carried the safe out through the restaurant’s front doors as it was too big and heavy to fit through the office window. They then locked the doors and went back inside and escaped through the office window. Computers and iPads in the restaurant were not touched. Windows on the Bay manager Line Thye described the robberies as “a big shock” – especially for her father, Palle Thye, who owns the popular beach-side eatery. “It was awful finding out,” she said. “We have CCTV but it’s rather dark around here at night with no lighting in the park.” She said there had been only one other break-in at the 22-year-old restaurant in the past six years. Police believe the same offenders may have been involved. Ms Thye said restaurant gift vouchers had been stolen along with cash. She warned people who may be offered the vouchers that they had no value. After the earlier raid, a chef arrived at 8am, Friday 17 June, to find the back door open and items strewn across the office floor and the safe moved. The thieves had used a jemmy bar to force open a kitchen door and then smashed their way into an administration area using a fire extinguisher, rifling through draws and cupboards. They stole $800 in tips, the previous night’s takings of $1164 and a $1000 wedding deposit. Police said the thieves had not attempted to open or remove the safe in the earlier raid. Anyone with information is asked to call Crime Stoppers 1800 333 000.

A BEAUMARIS woman told police she was followed on three occasions by a man as she left Cheltenham station. In the latest incident, the woman, 26, got off the train, 7.40pm, Wednesday 15 June, and walked towards her car in Coape St. She noticed a man following her close behind as she passed Cheltenham Primary School and crossed the road; the man did the same. She quickened her pace and the man did, too. Near Coape St the woman phoned a friend and said she was being followed. When she turned the man had disappeared. The woman told police the same man followed

her, 6pm, 7 June, at the same location. She said she started running and the man did the same, and then hid behind trees when the woman turned around. On another occasion late last year he bent down and pretended to tie his shoe laces even though he was wearing shoes without laces. The woman reported the incidents to the station PSOs and also to Cheltenham police. The man is described as Caucasian, late 20s, slim-to-medium build, 180cm, wearing a grey hoodie with the hood up and pale coloured jeans. Anyone with information is asked to call Crime Stoppers 1800 333 000.

Woman assaulted TWO men went to a Beaumaris woman’s aid at a Charman Rd service station, 8.20pm, Friday 17 June, after she was pushed up against her car by a man who appeared to be intoxicated. After filling up with petrol, the woman, 20, had seen the man place a full jerry can on her passenger seat. She put the can on the ground and, as the man walked up behind her, asked: “What do you want? This is my car.” The man reportedly became aggressive and grabbed the woman on her shoulder and tried to force her to the ground. When she called for help two customers challenged the offender who backed off. T he woman, 20, drove away and later reported the incident to Cheltenham police. However, at 9.20pm the same day, the offender returned to the service station and reportedly became aggressive to the attendant while demanding to see CCTV footage of the incident. H e claimed two men had stolen his car while he was paying for petrol. Police attended and watched the footage which showed the man arriving on foot to fill the jerry can with petrol. He was reportedly too drug or alcohol affected to be interviewed but he is expected to be charged on summons with unlawful assault at a later date.

TWO young bandits allegedly pointed a shotgun at a Patterson Lakes service station attendant, 1.17am, Tuesday 14 June, before stealing $900 from the till. They then drove off east along Thompson Rd in a stolen Ford sedan which was later pulled over by highway police in Dandenong. A man and a woman, both 18, were arrested and charged with armed robbery and attempted armed robbery. A third person ran off and is still at large. The man is under guard at Casey hospital. Court locations and dates are yet to be determined.

ALL ROLLER BLINDS ARE LOCALLY MADE IN OUR OWN FACTORY. Quality &amp; Service at the right price.

Comedy feast served up MOORABBIN’S Bawarchi restaurant and Kingston Arts have teamed up to dish up a tasty experience when Is It Because I’m Indian? hits the stage this week at Kingston Arts Centre. Audience members can enjoy eating spicy Indian food and watch Rajendra Moodley’s spicy one-man show about his life as a Melbourne-based actor and writer. Sick of being typecast as the “token Indian” Raj takes on the stereotypes and bullies in

a rollicking ride of laughter and tears. The show is packed with colourful characters and reminds us all that everyone has their own “fragrant curry of magical realism”. n Is It Because I’m Indian? will be staged at Kingston Arts Centre, 979 Nepean Highway, Moorabbin on Friday 24 June, 8pm. Show only tickets $25, Bawarchi Indian dinner and show, $45. See kingstonarts.com.au or call 9556 4440.