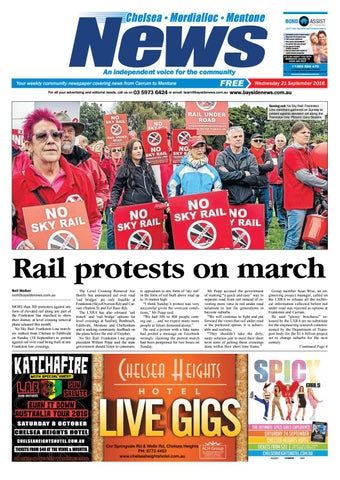 Rail protests on march Neil Walker neil@baysidenews.com.au MORE than 300 protesters against any form of elevated rail along any part of the Frankston line marched to show their dismay at level crossing removal plans released this month. No Sky Rail: Frankston Line marchers walked from Chelsea to Edithvale on Sunday (18 September) to protest against rail over road being built at any Frankston line crossings.

The Level Crossing Removal Authority has announced rail over road ‘rail bridges’ are only feasible at Frankston (Skye/Overton Rd) and Carrum (Station St and Eel Race Rd). The LXRA has also released ‘rail trench’ and ‘rail bridge’ options for level crossings at Seaford, Bonbeach, Edithvale, Mentone and Cheltenham and is seeking community feedback on the plans before the end of October. No Sky Rail: Frankston Line group president Willem Popp said the state government should listen to communi-

ty opposition to any form of ‘sky rail’ in the form of rail built above road up to 16 metres high. “I think Sunday’s protest was very successful given the overcast conditions,” Mr Popp said. “We had 300 to 400 people coming out … and we expect many more people at future demonstrations.” He said a person with a fake name had posted a message on Facebook wrongly claiming the protest march had been postponed for two hours on Sunday.

Mr Popp accused the government of wanting “a quick and easy” way to separate road from rail instead of investing more time in rail under road solutions to last for generations in bayside suburbs. “We will continue to fight and put forward the views that rail under road is the preferred option. It is achievable and realistic. “They shouldn’t take the dirty, nasty solution just to meet their short term aims of getting these crossings done within their short time frame.”

Group member Sean Wise, an engineering project manager, called on the LXRA to release all the technical information collected before rail under road was rejected as options at Frankston and Carrum. He said “glossy brochures” released by the LXRA are no substitute for the engineering research commissioned by the Department of Transport body for the $1.6 billion project set to change suburbs for the next century. Continued Page 6