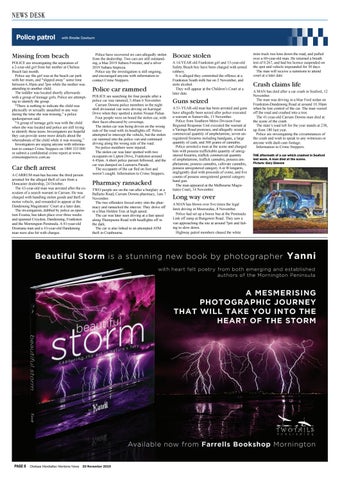 Missing from beach POLICE are investigating the separation of a 2-year-old girl from her mother at Chelsea Beach last month. Police say the girl was at the beach car park with her mum, and “slipped away” some time between 6.30pm and 7pm while the mother was attending to another child. The toddler was located shortly afterwards with a group of teenage girls. Police are attempting to identify the group. “There is nothing to indicate the child was physically or sexually assaulted in any way during the time she was missing,” a police spokesperson said. “A group of teenage girls was with the child when she was located and police are still trying to identify these teens. Investigators are hopeful they can provide some more details about the whereabouts of the child while it was missing.” Investigators are urging anyone with information to contact Crime Stoppers on 1800 333 000 or submit a confidential crime report at www. crimestoppersvic.com.au

Car theft arrest A CARRUM man has become the third person arrested for the alleged theft of cars from a Doncaster dealership, 24 October. The 43-year-old man was arrested after the execution of a search warrant in Carrum. He was charged with handling stolen goods and theft of motor vehicle, and remanded to appear at the Dandenong Magistrates’ Court at a later date. The investigation, dubbed by police as operation Exuma, has taken place over three weeks and spanned Croydon, Dandenong, Frankston and the Mornington Peninsula. A 41-year-old Dromana man and a 43-year-old Dandenong man were also hit with charges.

Police have recovered six cars allegedly stolen from the dealership. Two cars are still outstanding, a blue 2019 Subaru Forester, and a silver 2019 Subaru Impreza. Police say the investigation is still ongoing, and encouraged anyone with information to contact Crime Stoppers.

Police car rammed POLICE are searching for four people after a police car was rammed, 5.40am 6 November. Carrum Downs police members in the night shift divisional van were driving on Karingal Drive when they spotted a stolen Nissan Pulsar. Four people were on board the stolen car, with their faces obscured by coverings. The stolen car was being driven on the wrong side of the road with its headlights off. Police attempted to intercept the vehicle, but the stolen car rammed into the police van and continued driving along the wrong side of the road. No police members were injured. The stolen car was later spotted with two occupants on Lipton Drive, Frankston around 4.45pm. A short police pursuit followed, and the car was dumped on Leawarra Parade. The occupants of the car fled on foot and weren’t caught. Information to Crime Stoppers.

Pharmacy ransacked TWO people are on the run after a burglary at a Ballarto Road, Carrum Downs pharmacy, 1am 7 November. The two offenders forced entry into the pharmacy and ransacked the interior. They drove off in a blue Holden Trax at high speed. The car was later seen driving at a fast speed along Thompsons Road with headlights off in the dark. The car is also linked to an attempted ATM theft in Cranbourne.

Booze stolen A 14-YEAR old Frankston girl and 15-year-old Safety Beach boy have been charged with armed robbery. It is alleged they committed the offence at a Frankston South milk bar on 2 November, and stole alcohol. They will appear at the Children’s Court at a later date.

Guns seized A 51-YEAR-old man has been arrested and guns have allegedly been seized after police executed a warrant in Somerville, 13 November. Police from Southern Metro Division Four Regional Response Unit executed the warrant at a Yaringa Road premises, and allegedly seized a commercial quantity of amphetamine, seven unregistered firearms including handguns, a large quantity of cash, and 500 grams of cannabis. Police arrested a man at the scene and charged him with possess traffickable quantity of unregistered firearms, traffick commercial quantity of amphetamine, traffick cannabis, possess amphetamine, possess cannabis, cultivate cannabis, possess unregistered category A or B longarm, negligently deal with proceeds of crime, and five counts of possess unregistered general category hand gun. The man appeared at the Melbourne Magistrates Court, 14 November.

Long way over A MAN has blown over five times the legal limit driving in Moorooduc, 8 November. Police had set up a booze bus at the Peninsula Link off ramp at Bungower Road. They saw a van approaching the site at around 7pm and failing to slow down. Highway patrol members chased the white

mini truck two kms down the road, and pulled over a 60-year-old man. He returned a breath test of 0.267, and had his licence suspended on the spot and vehicle impounded for 30 days. The man will receive a summons to attend court at a later date.

Crash claims life A MAN has died after a car crash in Seaford, 12 November. The man was driving in a blue Ford sedan on Frankston-Dandenong Road at around 10.30pm when he lost control of the car. The man veered off the road and crashed into a tree. The 41-year-old Carrum Downs man died at the scene of the crash. The state’s road toll for the year stands at 238, up from 180 last year. Police are investigating the circumstances of the crash and wish to speak to any witnesses or anyone with dash cam footage. Information to Crime Stoppers. THE aftermath of a car which crashed in Seaford last week. A man died at the scene. Picture: Gary Sissons