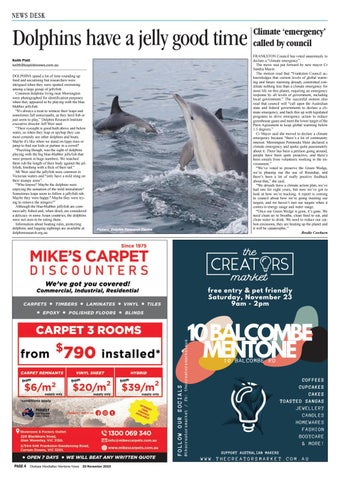 Dolphins have a jelly good time

FRANKSTON Council has voted unanimusly to declare a “climate emergency”. The move was put forward by new mayor Cr Sandra Mayer. The motion read that “Frankston Council acknowledges that current levels of global warming and future warming already committed constitute nothing less than a climate emergency for most life on this planet, requiring an emergency response by all levels of government, including local government.” The succesful motion also read that council will “call upon the Australian state and federal governments to declare a climate emergency, and back this up with legislated programs to drive emergency action to reduce greenhouse gases and meet the lower target of the Paris Agreement to keep global warming below 1.5 degrees.” Cr Mayer said she moved to declare a climate emergency because “there’s a lot of community interest. Mornington Peninsula Shire declared a climate emergency and spoke quite passionately about it. There has been a petition going around, people have been quite proactive, and there’s been emails from volunteers working in the environment.” “We’ve voted to preserve the Green Wedge, we’re phasing out the use of Roundup, and there’s been a lot of really positive feedback about that,” she said. “We already have a climate action plan, we’ve had one for eight years, but now we’ve got to look at how we’re tracking. A report is coming to council about how we’re going meeting our targets, and we haven’t met our targets when it comes to energy usage and water usage. “Once our Green Wedge is gone, it’s gone. We need clean air to breathe, clean food to eat, and clean water to drink. We need to reduce our carbon emissions, they are heating up the planet and it will be catastrophic.” Brodie Cowburn

Keith Platt keith@baysidenews.com.au DOLPHINS spend a lot of time rounding up food and socialising but researchers were intrigued when they were spotted swimming among a large group of jellyfish. Common dolphins living near Mornington were photographed for identification purposes when they appeared to be playing with the blue blubber jellyfish. “It&#39;s always a treat to witness their leaps and sometimes full somersaults, as they herd fish or just seem to play,” Dolphin Research Institute executive director Jeff Weir said. “Their eyesight is good both above and below water, so when they leap or spyhop they can most certainly see other dolphins and boats. Maybe it&#39;s like when we stand on tippy-toes or jump to find our kids or partner in a crowd? “Puzzling though, was the sight of dolphins playing with the big blue-blubber jellyfish that were present in huge numbers. We watched them rub the length of their body against the jellyfish, finishing with a flick of their tail.” Mr Weir said the jellyfish were common in Victorian waters and “only have a mild sting on their stumpy arms”. “Who knows? Maybe the dolphins were enjoying the sensation of the mild stimulation? Sometimes leaps seem to follow a jellyfish rub. Maybe they were happy? Maybe they were trying to remove the stingers?” Although the blue-blubber jellyfish are commercially fished and, when dried, are considered a delicacy in some Asian countries, the dolphins were not seen to be eating them. Information about boating rules, protecting dolphins, and logging sightings are available at dolphinresearch.org.au