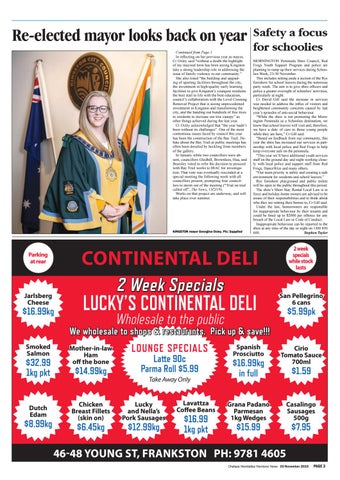 Re-elected mayor looks back on year Continued from Page 1 In reflecting on her previous year as mayor, Cr Oxley said “without a doubt the highlight of my mayoral term has been seeing Kingston take a strong leadership role in addressing the issue of family violence in our community.” She also listed “the building and upgrading of sporting facilities throughout the city, the investment in high-quality early learning facilities to give Kingston’s youngest residents the best start to life with the best education, council’s collaboration with the Level Crossing Removal Project that is seeing unprecedented investment in Kingston and transforming the city, and the handing out hundreds of free trees to residents to increase our tree canopy” as other things achieved during the last year. Cr Oxley acknowledged that “the year hadn’t been without its challenges”. One of the most contentious issues faced by council this year has been the construction of the Bay Trail. Debate about the Bay Trail at public meetings has often been derailed by heckling from members of the gallery. In January while two councillors were absent, councillors Gledhill, Brownlees, Hua, and Bearsley voted to refer the decision to proceed with Bay Trail works to IBAC for investigation. That vote was eventually rescinded at a special meeting the following week with all councillors present, prompting four councillors to storm out of the meeting (“Trial on trail called off”, The News, 13/2/19). Works on that project are underway, and will take place over summer.

MORNINGTON Peninsula Shire Council, Red Frogs Youth Support Program and police are planning to ramp up their services during Schoolies Week, 23-30 November. This includes setting aside a section of the Rye foreshore for school leavers during the notorious party week. The aim is to give shire officers and police a greater oversight of schoolies’ activities, particularly at night. Cr David Gill said the increase in services was needed to address the influx of visitors and heightened community concerns caused by last year’s episodes of anti-social behaviour. “While the shire is not promoting the Mornington Peninsula as a Schoolies destination, we know that school leavers will visit and, therefore, we have a duty of care to those young people while they are here,” Cr Gill said. “Based on feedback from our community, this year the shire has increased our services in partnership with local police and Red Frogs to help keep everyone safe on the peninsula. “This year we’ll have additional youth services staff on the ground day and night working closely with local police and support staff from Red Frogs, DanceWize and many others. “Our main priority is safety and creating a safe environment for residents and school leavers.” Rye foreshore playground and public toilets will be open to the public throughout this period. The shire’s Short Stay Rental Local Law is in force and holiday-home owners are advised to be aware of their responsibilities and to think about who they are renting their homes to, Cr Gill said. Under the law, homeowners are responsible for inappropriate behaviour by their tenants and could be fined up to $2000 per offence for any breach of the Local Law or Code of Conduct. Inappropriate behaviour can be reported to the shire at any time of the day or night on 1300 850 Stephen Taylor 600.

Safety a focus for schoolies

We wholesale to shops & restaurants. Pick up & save!!! Smoked Salmon

Mother-in-law Ham off the bone